Elo rating in Stronghold is one of the key indicators of any clan’s success.

Clans earn Elo rating points after each battle in Skirmishes and Advances. Elo is calculated separately for each division. To get onto the rating by Elo in the division, clans must have fought at least 50 battles in the last 28 days.

If your clan has fought enough battles to get onto the division rating list, the corresponding flag glows yellow. Click the flag to view the rating by Elo in the selected division. 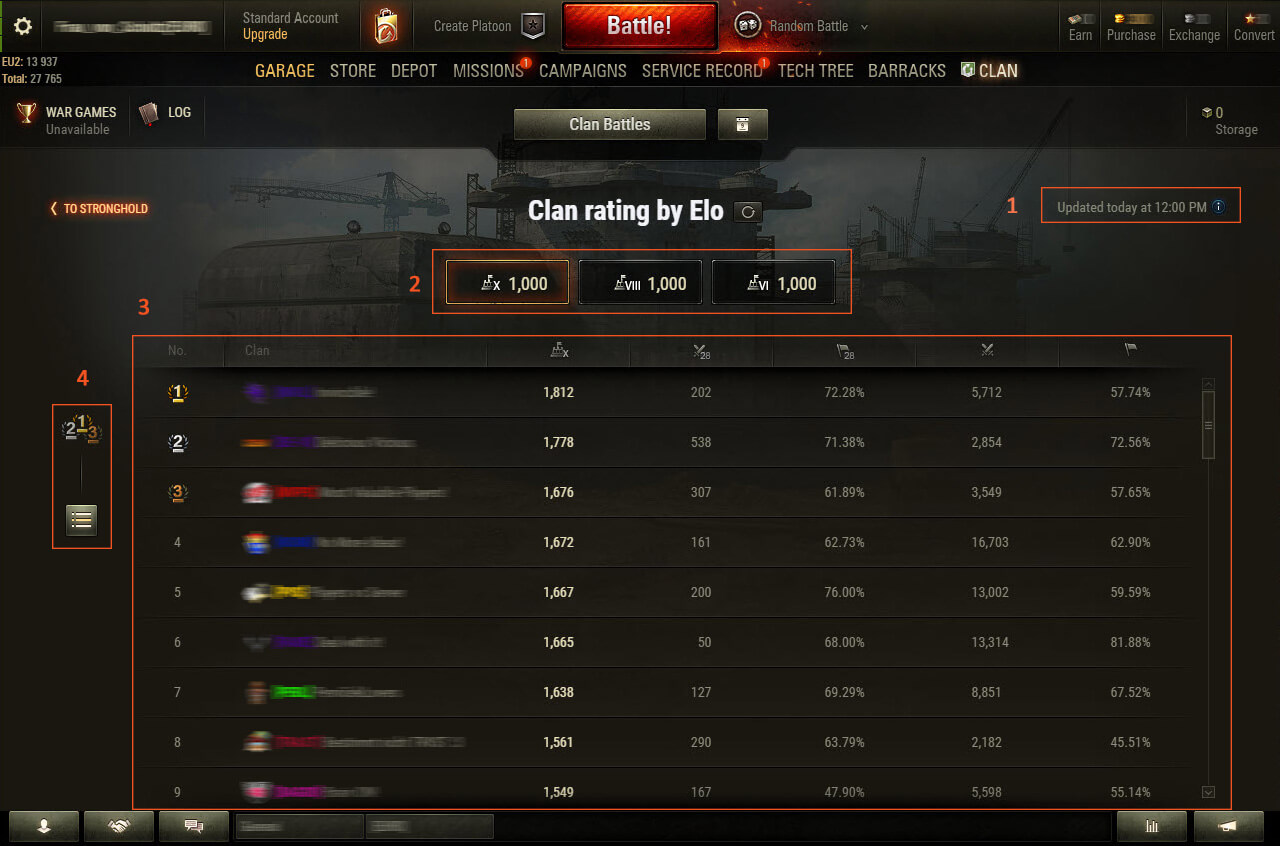 If your clan has not fought 50 battles in the last 28 days, its Elo rating, statistics, and number of battles fought are displayed at the bottom of the screen.

How is Elo rating calculated?

Before the first battle, a clan's Elo rating is 1,000. Elo rating can be a whole number and cannot be less than 0.

The expected battle result is counted using the following formula:

EA—expected battle result for clan A.

RA—pre-battle Elo rating of clan A.

EB—expected battle result for clan B.

RB—pre-battle Elo rating of clan B.

Example: Clan A has an Elo rating of 1,200 before the battle, while clan B has 400. The expected battle result for clan A (EA):

The expected battle result for clan B (EB):

According to these calculations, clan A - with the higher Elo rating - is most likely to win the battle.

The actual rating points each clan receives after the battle is calculated using the following formula:

P—number of rating points clans get after the battle.

S—number of points received for the battle: victory–1, draw–0.5, defeat–0.

K—ratio, based on the current clan’s Elo rating.

The Elo must be a whole number, so the calculation results for both clans are rounded off to 0.

The Elo must be a whole number, so the calculation results for both clans are rounded off. As a result, PA= ‒15, аnd PB= 25.

By defeating more powerful clans, your own clan can climb to the top of the ratings. The greater the difference in Elo rating between clans, the more rating points the weaker clan receives for victory.

Clans’ Elo ratings are updated according to a simple calculation:

R'—clan's Elo rating after the battle.

R—clan's Elo rating before the battle.

P—number of rating points clans got after the battle.

The Elo Rating in the Stronghold mode, along with the Global Map Elo Rating and other indicators, is an important part of the Clan Rating. For a detailed description of how the Clan Rating is calculated, go to the Clan portal.