An Advance is a series of battles for Industrial Resource between two clan detachments on bridgeheads. The ultimate aim in an Advance is to capture all enemy Lines and the Citadel.

To fight in an Advance, clans create detachments and choose bridgeheads. Opponents are matched by player skill. If there are no clans of equal skill in the queue, your enemy is selected at random and may be stronger or weaker than you.

(Battle schedule) on the right of the Clan Battles button in your Stronghold, or in the Stronghold: Battles window.

To engage in an Advance:

You can also open the detachment list right from your Garage. Select Stronghold: Battles in the menu on the Battle! button's right. 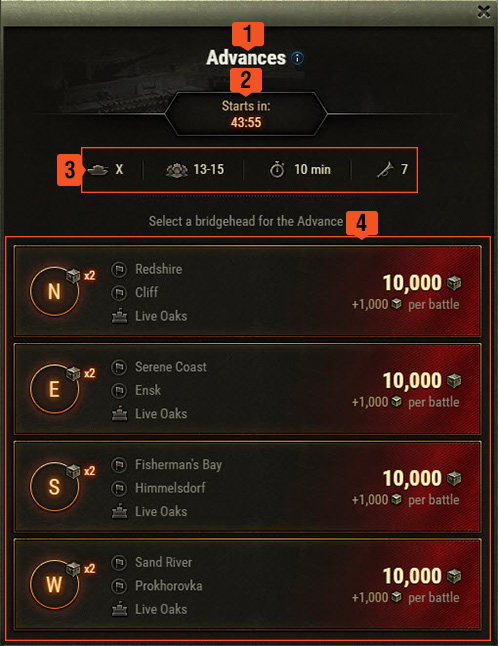 Before you form a detachment, choose a bridgehead for your Advance. Four bridgeheads are available: North, South, East, and West. Each of them consists of three strategic points:

The list of bridgeheads is displayed on the right part of the Mode Selection window.

Clans can engage in four Advances at a time, one from each bridgehead.

Preparing for the Advance

After you choose a bridgehead, the Advance window is displayed. Here you can form a detachment, enable Reserves, confirm that you’re ready for battle, and follow the course of the Advance.

You can either create your own detachment or join an existing one. For more information, see Creating Your Own Detachment and Joining a Detachment. 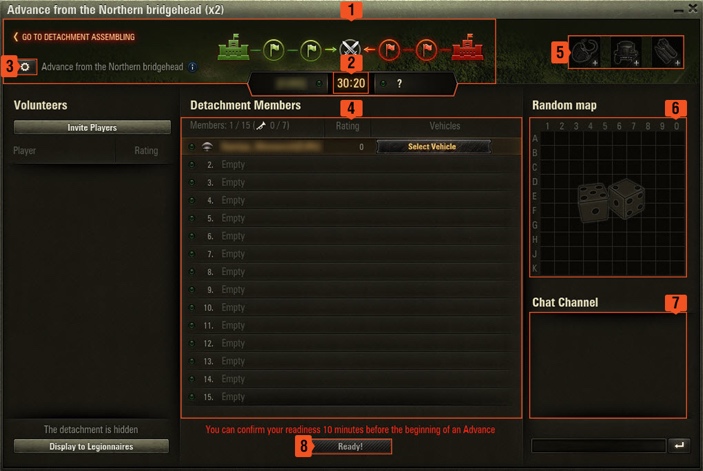 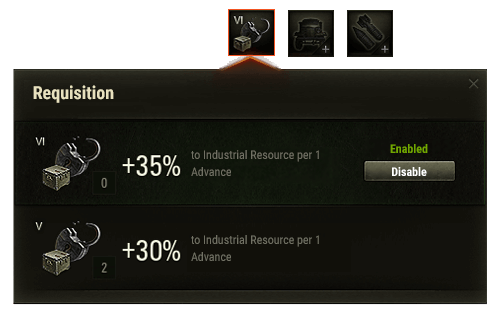 To gain an additional advantage in the Advance, enable One-Time-Effect Reserves.

You can enable the following Reserves:

For more information, check out these articles: Using Reserves and Combat Reserves.

Course of the Advance

Once the detachment is formed, the Commander confirms that everyone is ready for the Advance. Opponents are matched by player skill among those who are ready to fight. If there are no clans of equal skill in the queue, so your enemy is selected at random and may be stronger or weaker than you.

The Advance develops in the following way:

If the battle ends with a draw, the attacking detachment is chosen at random.

In the break between battles, the detachments have 3 minutes, during which they must confirm they’re ready for battle and can change their vehicles, rearrange the detachment, and select Reserves.

When both detachments confirm that they are ready, the battle begins.

If one of the detachments does not confirm that it is ready to fight before the start of a battle, that detachment suffers a technical defeat in the battle. The Advance doesn’t end though: the next battle starts after the normal three-minute break.

If both detachments do not confirm that they are ready for battle:

End of the Advance

The Advance ends in one of two ways:

If the Advance ends in less than 17 minutes and the opponent’s Citadel is not captured, the current battle is fought until the end, but a new battle won't start after it. 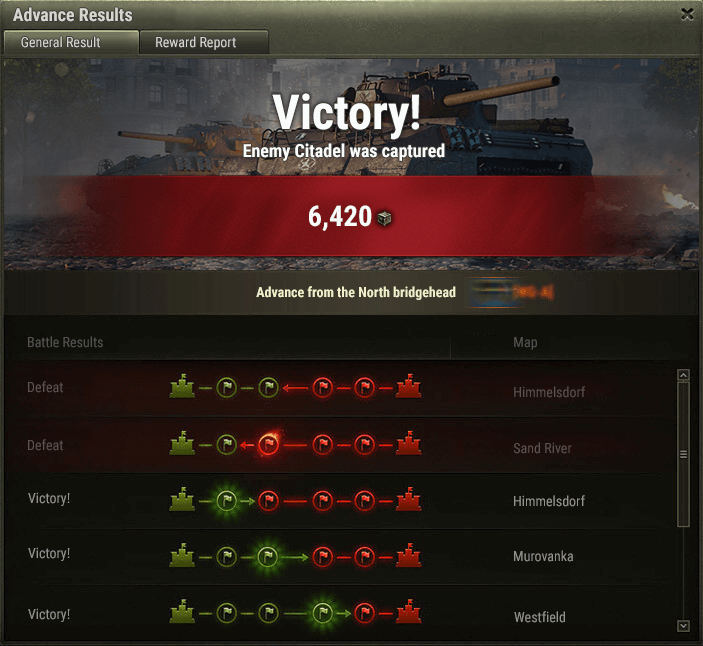 When the Advance ends, its results are calculated. There are three possible outcomes in an Advance:

Detachments get their reward according to the number of Lines under their control. The more Lines they capture, the greater their reward is. Moreover, detachments get Industrial Resource for every battle fought during the Advance.

Once a day, a clan can get double the amount of Industrial Resource as a reward on each of the bridgeheads. To obtain this reward, the clan must gain a complete or partial victory in the Advance from the selected bridgehead. Note that the reward can only be obtained as a result of the entire Advance, not each battle fought within the Advance.