Version 9.12 is ready for deployment. This update will bring a lot of exciting content, including the Rampage game mode, new vehicles and some important changes. Here’s a handy summary of what’s new:

The event you all have been testing for the past months makes a come back as a permanent game mode! It will feature two battle types: Steel Hunt and Domination - each with their own set of rules and goals.

The new Rampage mode comes with a set of dedicated personal missions, similar to those already available in Random Battles. The Rampage missions will also feature valuable rewards for their completion, including the Tier X T-22 Medium tank! For more details, please refer to the dedicated article about the tank.

Last but not least, the game mode will come with an exclusive map: Berlin. Make sure to check it out as you will be battling on it really soon!

Due to the recent events in Paris, we have decided to postpone the release of the Paris-inspired map, “Ravaged Capital”. Our thoughts are with all those affected by the tragedy and their families all over the world.

New players will now be able to learn the ropes of World of Tanks more efficiently, thanks to the new tutorial. The tool will now also feature PvE content (player vs. environment), which will help greatly in getting accustomed to the game before rolling out into battles against live opponents. For more details, please refer to the dedicated article.

Improvements to the Viewing System

The mechanics of objects being drawn in battle in regard to the player's position have been improved. As a result, the viewing system is now more efficient. For more details, please refer to the dedicated article.

Changes in the US Tech Tree

With this update, the low Tiers in the American tech tree will be affected by some changes, which will include adding new vehicles, rebalancing, and also Tier and vehicle class reassignments. The new tree will look as follows: 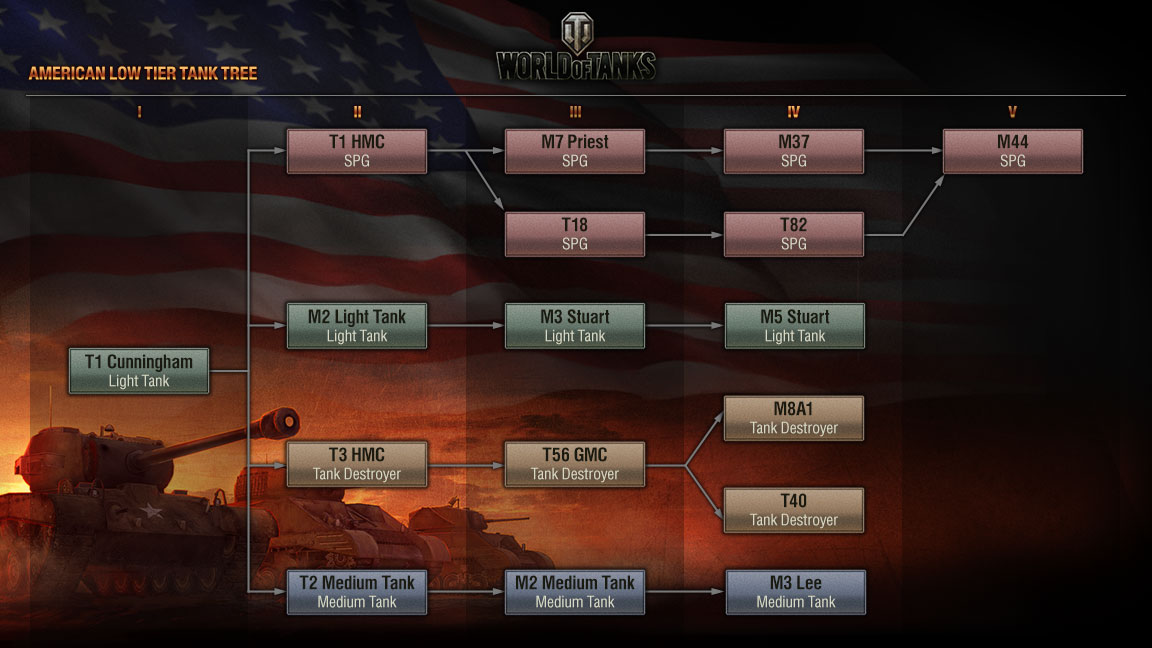 The British Tier X medium tank, the FV4202, is being replaced by the Centurion Action X. The former will undergo rebalancing and return as a Tier VIII Premium tank at a later date.

Players who own the Centurion Action X by 19 January 2016 (i.e. have the tank in their garage), will have the opportunity to obtain the Premium version of the FV4202 by completing a set of missions. More details will be provided on the website closer to the missions' release.

The French will receive a new Tier VIII Premium medium tank, the M4A1 Revalorisé. As the name implies, this vehicle is based on the American Sherman, but unlike the original, the French variant is equipped with a more powerful gun, capable of competing with any Tier VIII medium tanks out there.

With this update, additional vehicles have been reworked for HD quality. These include:

For the complete list of changes and additions please refer to the Updates section on the website.

You will be able to experiment with all of this new content once the new update is implemented in the game. In order to make the changes, the game server will be undergoing maintenance on 18 November from 02:00 to 06:30 CET (UTC+1).

IMPORTANT: Due to the update, the Global Map in Clan Wars will be undergoing maintenance from 18 November at 01:00 until 23 November at 04:00 CET (UTC+1) during which it will be frozen.

Players with a Premium Account active during the maintenance will be compensated.

Will you be the first to test the new version, Commanders?