With Update 1.7.1, and only for its duration, two new 3D styles are available in-game for gold! One for the

Let's take a closer look and find out why there are helmets decorated with black feathers on the Italian medium, and a bamboo ladder attached to the side of a French heavy tank.

The new styles are available in-game via Exterior -> Preset Styles until Update 1.8.

Helmets decorated with black feathers, which can be seen on the turret rear, are worn by the Bersaglieri—soldiers of the Italian Army's elite unit.

They were originally created by General Alessandro La Marmora in 1836 to serve in the Army of the Kingdom of Sardinia. The Bersaglieri were initially trained as sharpshooters and tough soldiers. They were easily recognisable with the distinctive, wide-brimmed hat they wore decorated with black capercaillie feathers. There is a version that has the feathers protecting the right eye of sharpshooters from sunlight, but over time, wearing the feathers became a tradition. 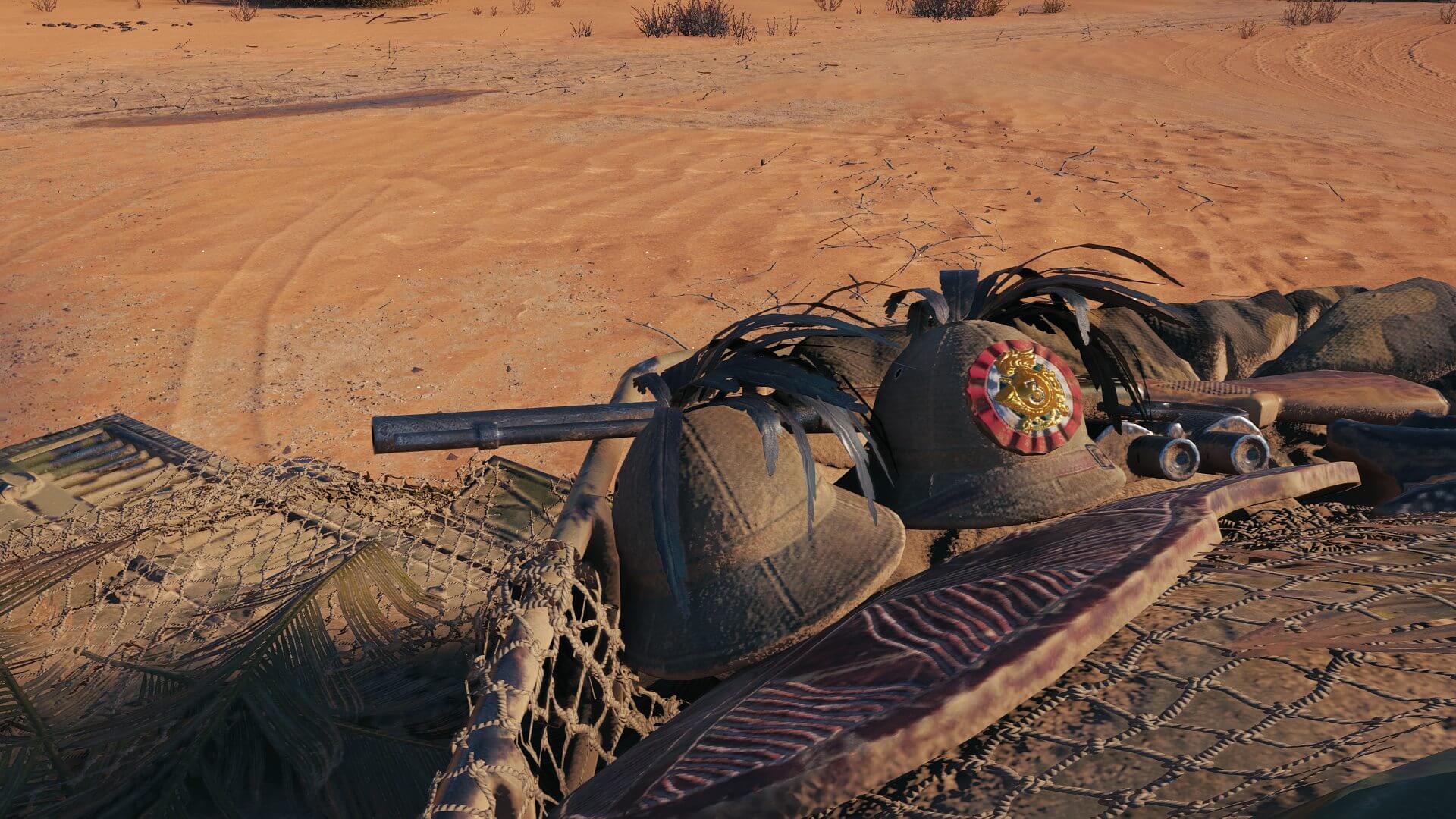 A Weapon of Two World Wars

On the right of the tank's fenders, boxes with the Carcano Moschetto M38 rifle can be seen.

When designing this rifle, the designer—Salvatore Carcano—used his experience with the best foreign rifle models of the time: the Mauser M1889 and the Mannlicher M.90. The new rifle was tested by the elite units of the Italian Army: the Bersaglieri and the Alpini units. Experienced shooters liked the rifle so much that they accepted it for service, and during the First and Second World Wars, it was used by the Italian Army. 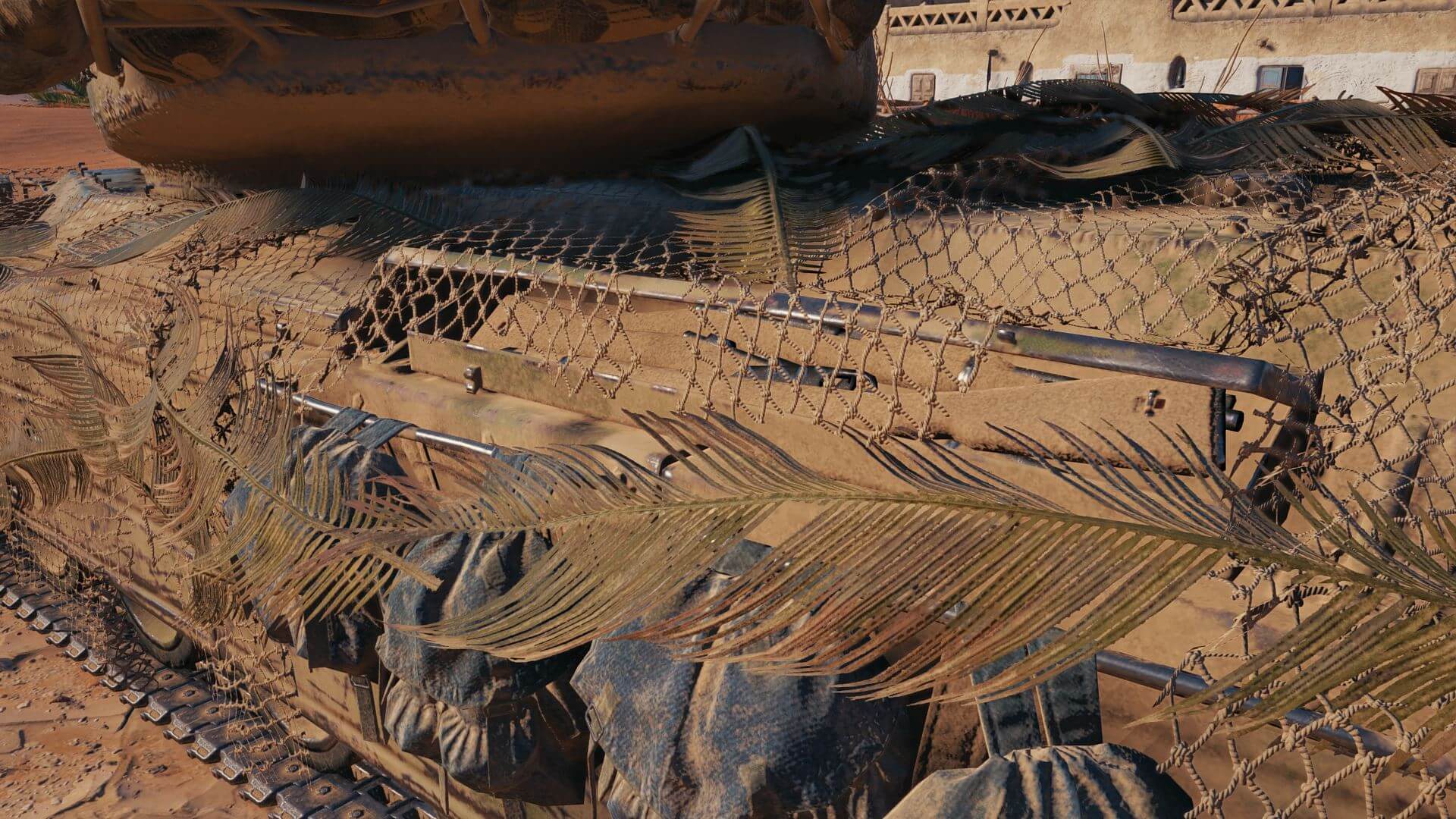 Africa as a Symbol of Italian Valour

Another feature of the style is African motifs. Until 1941, the administrative-territorial entity of Italian East Africa existed on the world map. The Italians intended to stay for a long time, but World War II ruined their plans.

Italian troops had unflattering fame in this war, but there were exceptions such as the Ariete Armoured Division. Many of its soldiers showed heroism in the Second Battle of El Alamein against the British.

One such act was a desperate attack of a dozen L13/40 tanks under the command of Luigi Arbib Pascucci into the very centre of the advancing 8th British Armored Brigade. They did the impossible—they forced the British to retreat.

But in the end, the difference in the number and quality of vehicles took its toll—all the attackers were killed. In subsequent battles, the division was surrounded and all but destroyed. Several vehicles and a squad of the Bersaglieri managed to escape the encirclement.

The newly formed Ariete II Division saved the Italian king and the government from being captured by the Nazis, defending Rome from the attacks of the 3rd German Panzergrenadier Division, despite being surrounded.

In World of Tanks, the Progetto M35 mod. 46 is a true predator! Its accurate gun and high mobility allow it to quickly track down and destroy its prey. The third component of the style emphasises these skills. It is clear from some of its details that the commander of the vehicle is ready to oppose even the most dangerous predator.

Firstly, it is the skull of an African buffalo—a trophy from one of the so-called Big Five game. In fact, the most dangerous of them! The buffalo usually attacks first without waiting for a shot, and when wounded, it attacks in all cases without exception. Many a hunter has fallen in pursuit of one. 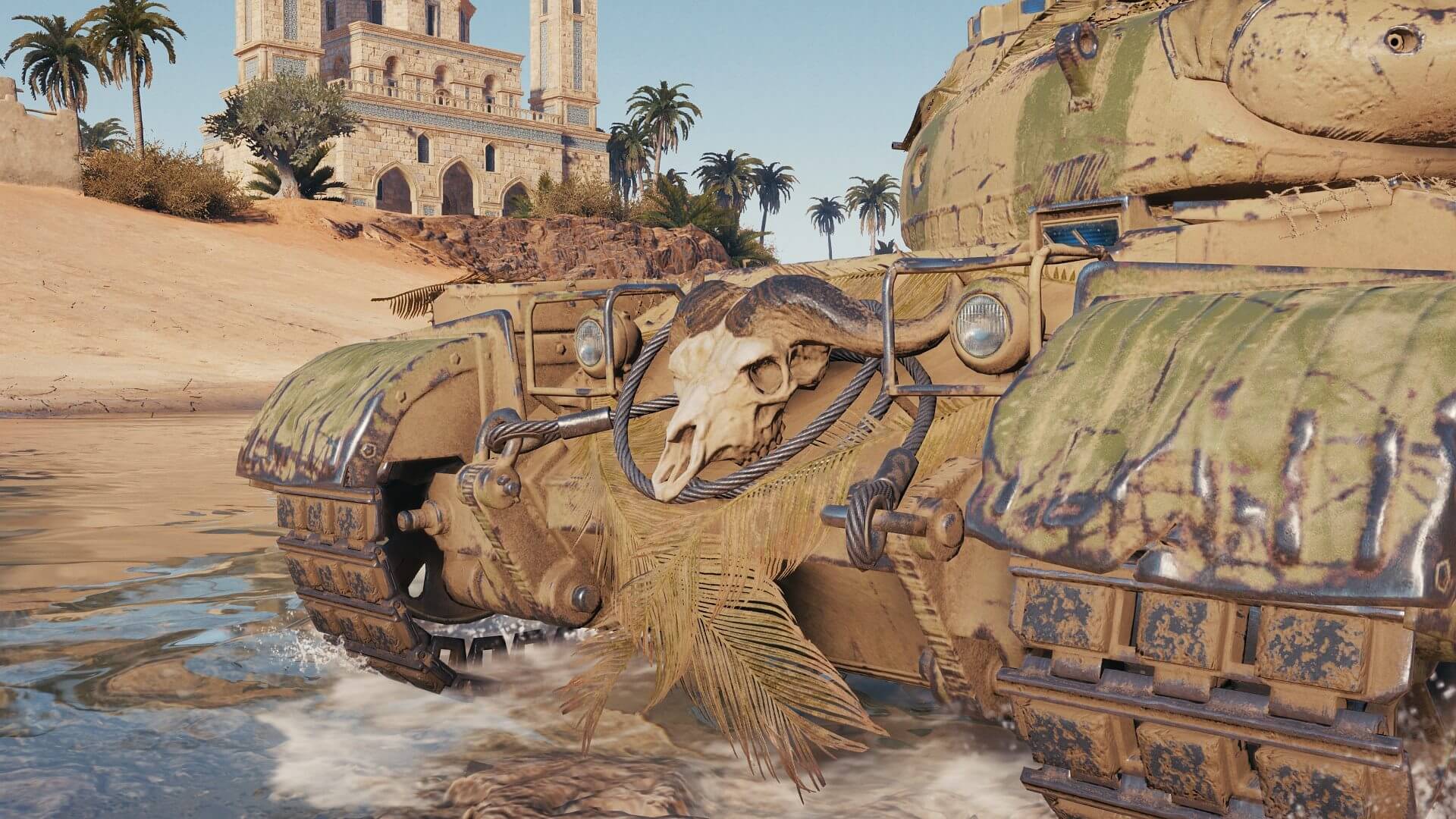 For a hunt to be successful, a powerful and reliable weapon is needed, and it can be found behind the turret. This lever-action carbine Davide Pedersoli 1886, for which the .45-70 Government cartridge is used, was one of the most powerful rifle calibres at the time when the weapon was designed. The lever-action mechanism ensured a high rate of fire for the carbine, which immediately calls to mind the Progetto M35 mod. 46's gun with its autoreloader mechanism! Equipped with a gun like this, the Progetto M35 mod. 46 can hunt even a Maus, the main beast of World of Tanks. 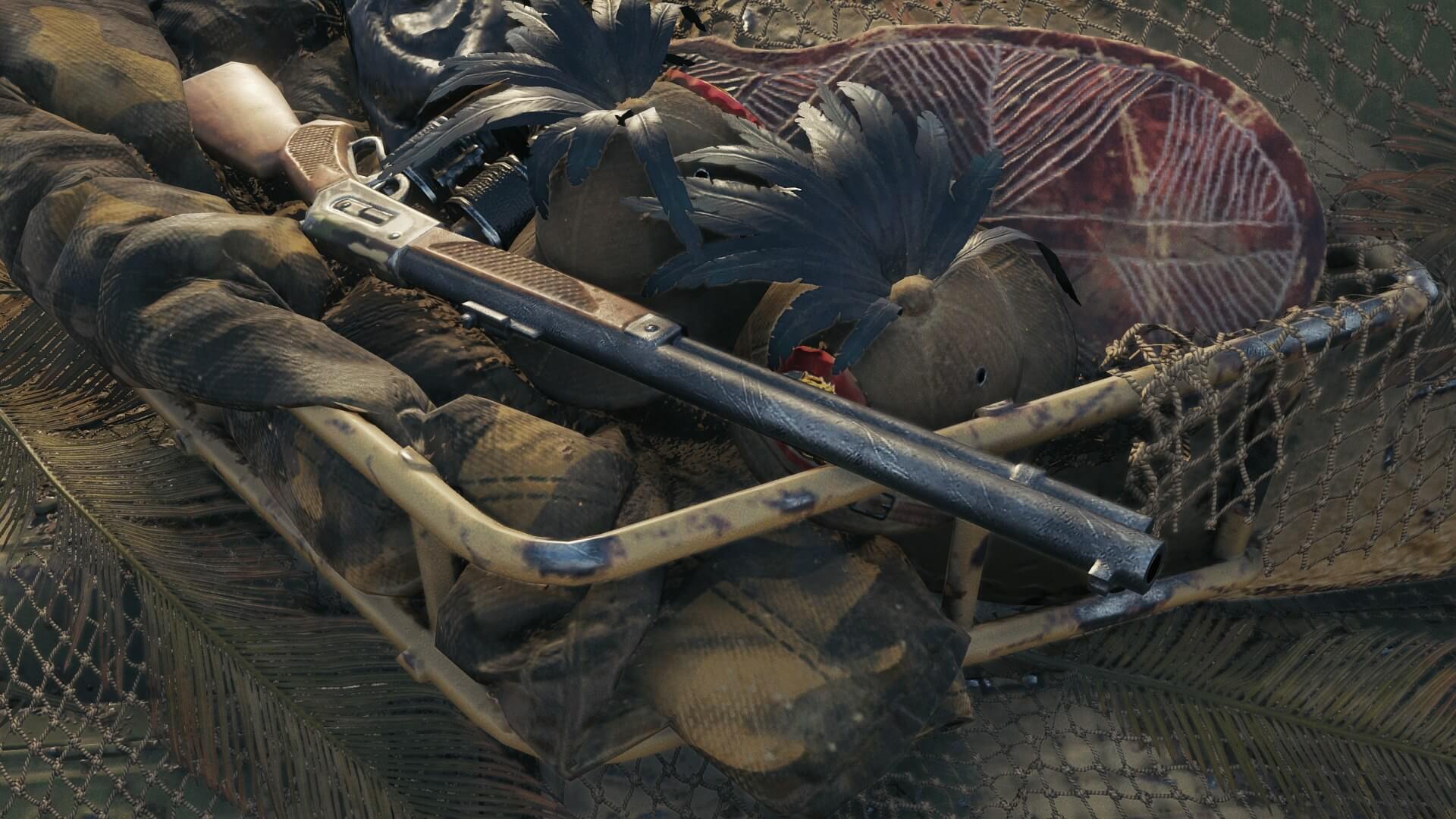 For the Spirits of Random Battles

And of course, gaining favour with the spirits is a must for a hunt to be successful. For this reason, several African masks are attached to the turret. Since ancient times, they have been used in Africa for many ceremonies, such as ritual dances before a hunt or before a battle. Charged with positive energy, masks can bring good luck. Perhaps, if they're attached to the vehicle, they'll win the favour of the Spirits of Random Battles! 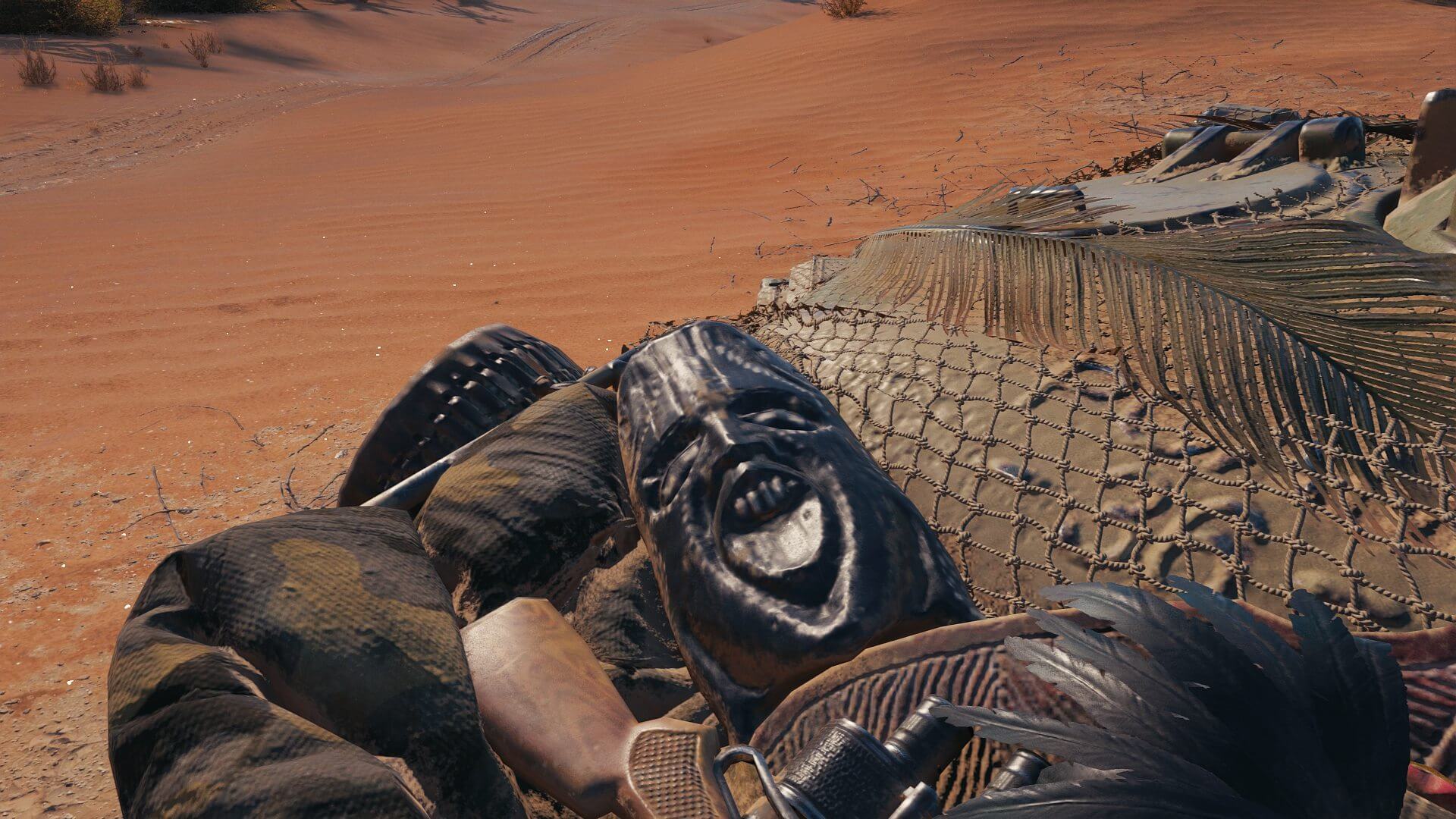 Style for "Hellish Disco in the Jungles"

The name of the Javan Rhino style was selected intentionally. Rarely seen in the wild, the Javan Rhino is on the verge of extinction. Of the six French heavy tank prototypes, only one (the AMX-50 Surbaissé) remains, and can be found in the museum of armoured vehicles in the city of Saumur.

This new style was inspired by the first Indochina War, during which French troops had to fight in the impenetrable jungle. Hellish heat, thousands of insects, poisonous reptiles... In such conditions, a tank becomes a home and a fortress. If the AMX 50 B had been sent for testing in the jungle, it would have probably looked this way.

By the way, the Americans themselves, who replaced the French in Vietnam, referred to the conditions of warfare as a "hellish disco in the jungle". 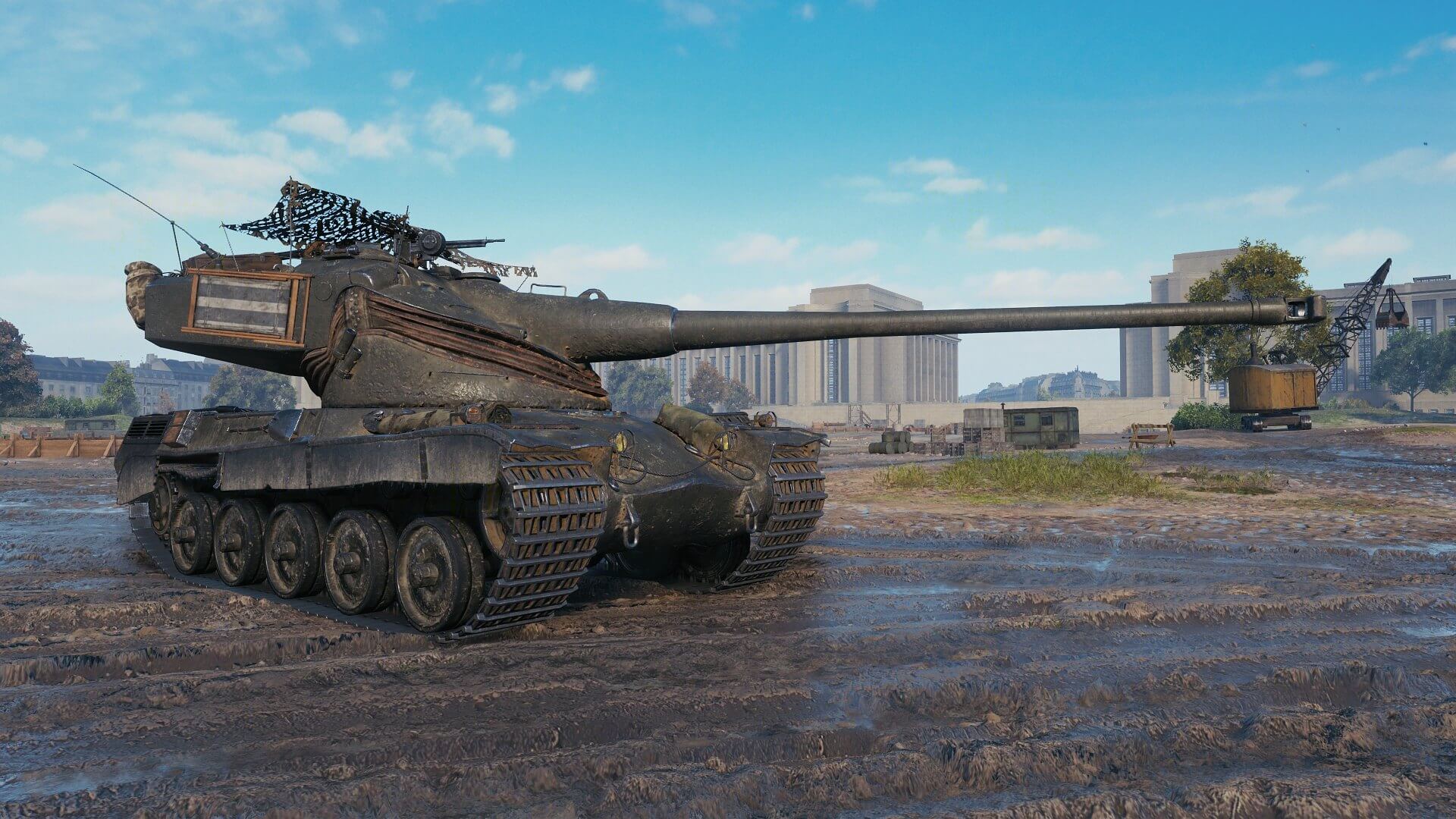 A camouflage net is stretched over the top of the AMX 50 B's turret to provide disguise, protection from the scorching sun, and lower the chance of an unexpected grenade being tossed into an open hatch. Such solutions are often used in modern tanks, including the camouflage of the Saab Barracuda company for the US Army. 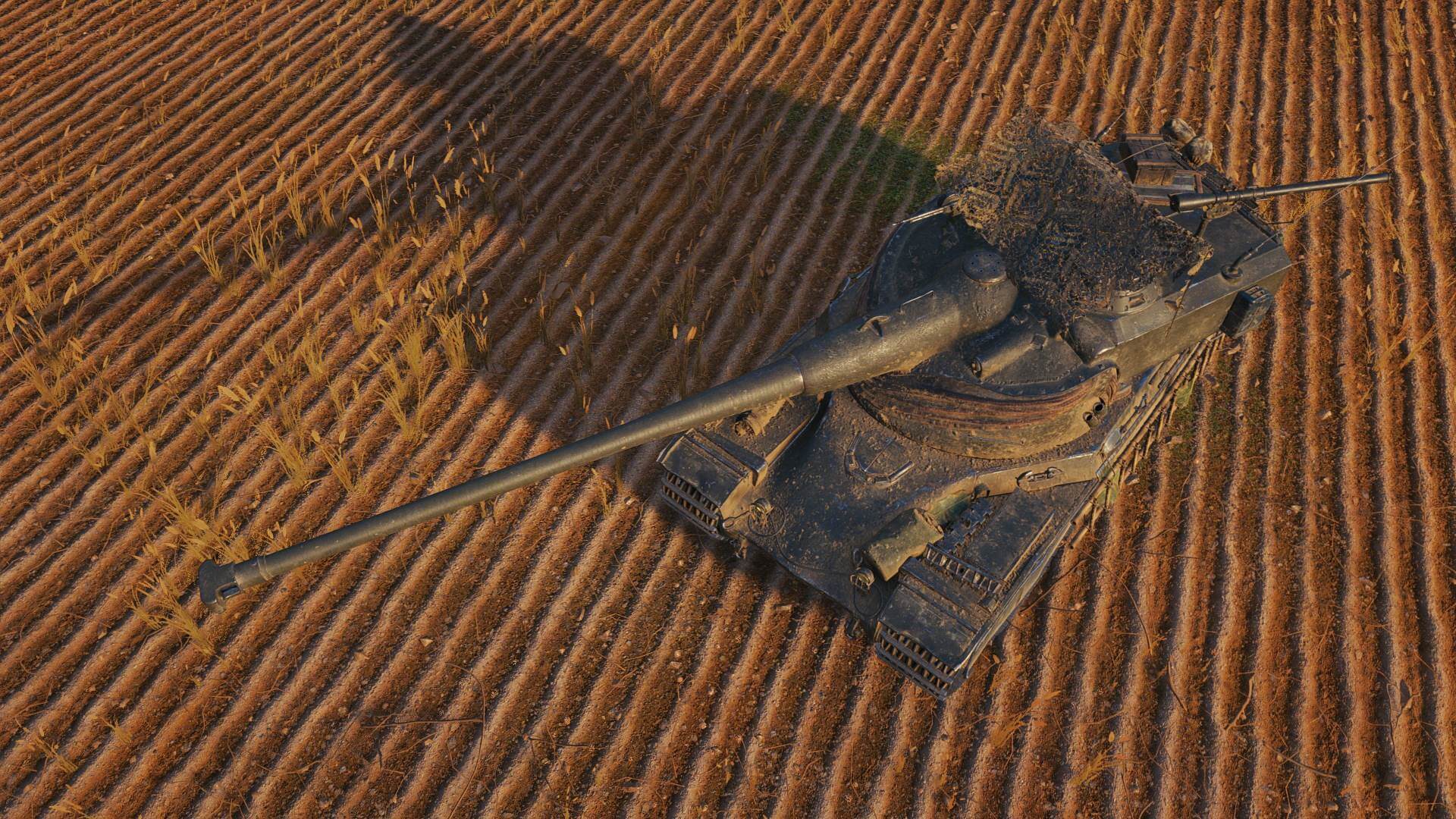 During the first Indochina War, the French were actively supported by the British and Americans. The latter provided the M20 recoilless rifle, adopted for service in 1945. The Americans successfully used it in battle against the Japanese.

Later on, the French also put it to good use. In the mountainous and hilly terrain, it proved to be an excellent choice to destroy enemy firing points. The M20 recoilless rifle was mounted on every vehicle, even motorcycles.

The Chinese analogies of the M20 (Type 52 and Type 56) have been sold all over the world and are still popular in third-world countries. 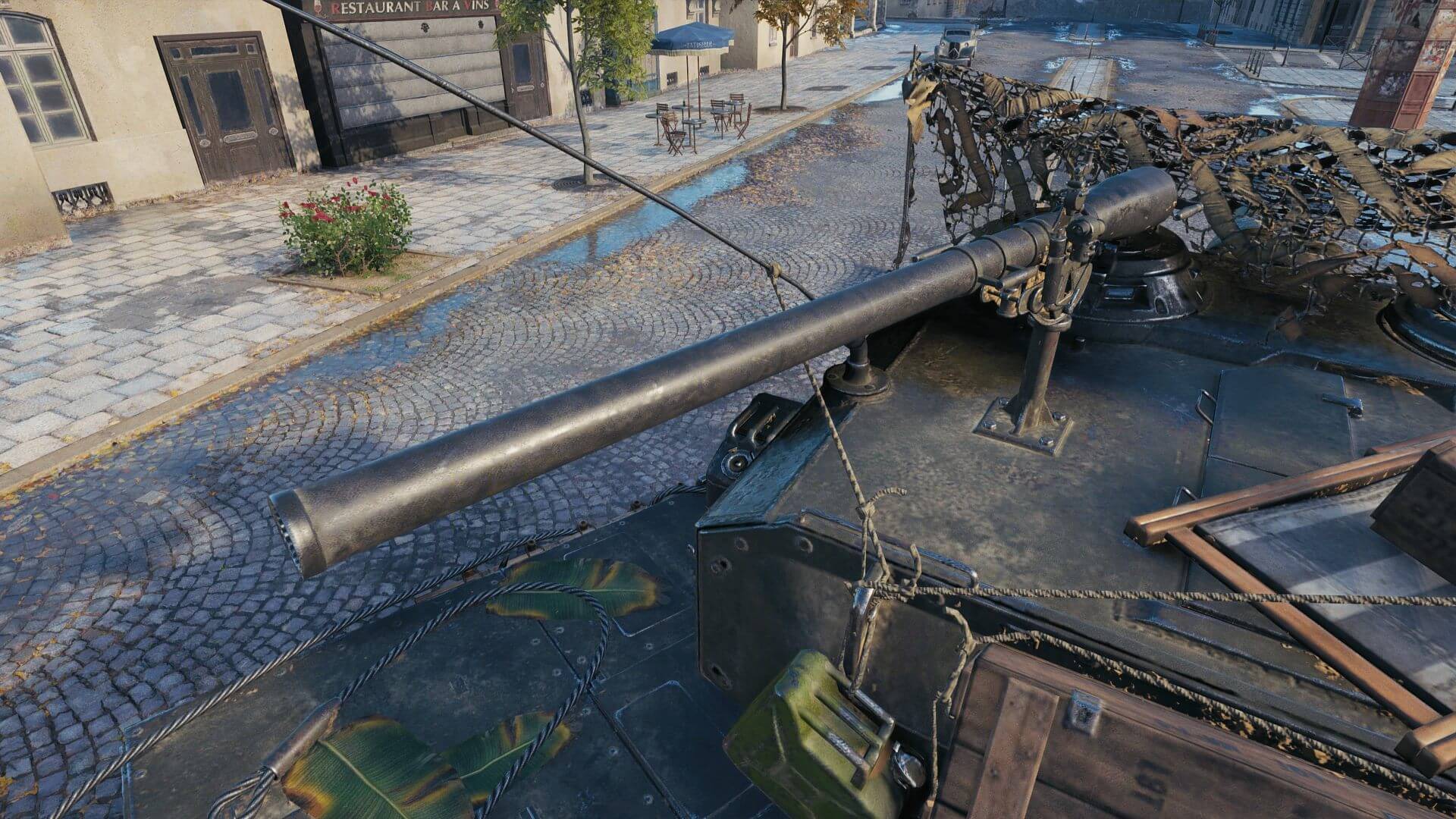 Attentive players may notice German entrenching tools mounted on the vehicle. The fact is that, after World War II, German vehicles and SPGs were used by the French Army for their intended purpose. 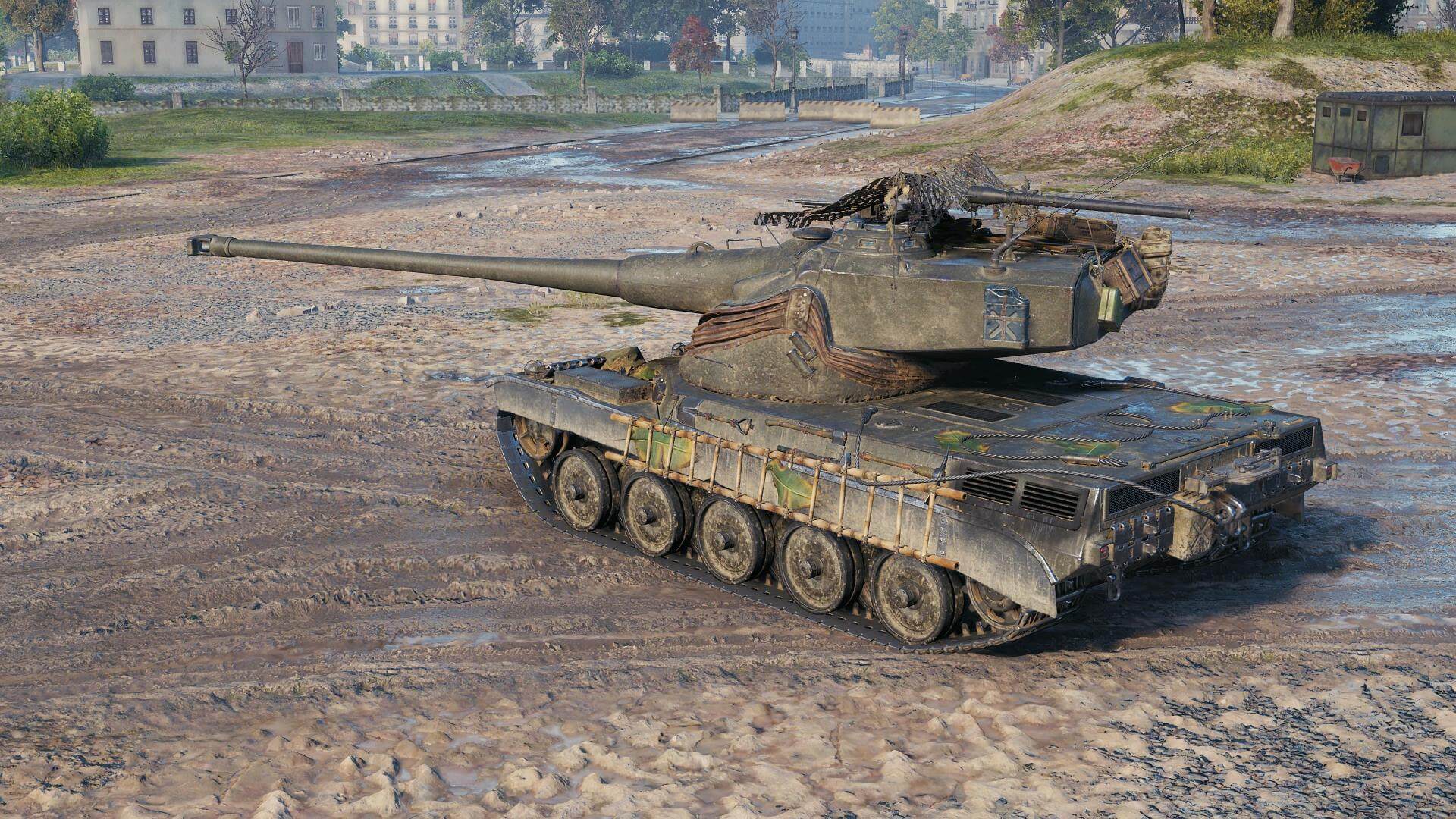 A ladder on the vehicle is a completely historical element. Such ladders can be seen in photographs of German heavy tanks during World War II. The designers of the style, who studied the real AMX 50, personally checked and verified that without a ladder, climbing such a vehicle is a challenge. 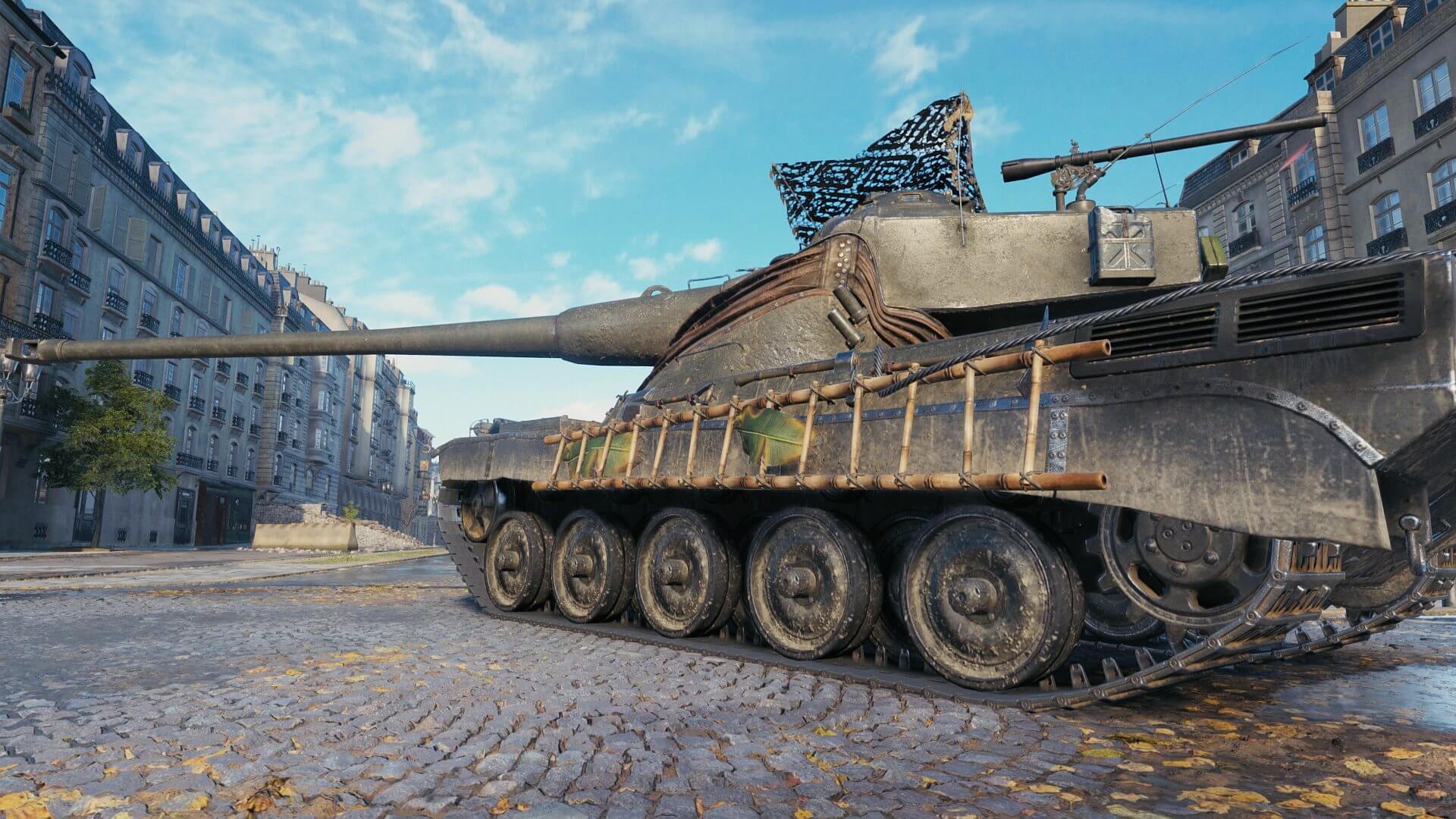