With a new branch of Swedish medium tanks coming to World of Tanks, we thought it was time to explore the fascinating backstory of the UDES medium line.

The End of an Old World

In the early 1970s, the Swedish government was looking to replace its armada of armoured vehicles, whether they were bought from other countries, such as the British Centurion, or homemade vehicles like the Strv 103-0.

This initiative was officially christened Underlagsgrupp Direkt Eld Stridsfordon or UDES in short, which we could translate to Surface Group Direct Fire Combat Vehicle. It doesn't say much for now, but to put it simply, the idea was to study and find solutions for new, inexpensive tanks that could still match and even outperform potential opponents. Talk about an impossible mission!

Yet, as it is often the case in armoured vehicle development, several companies answered the call from the Swedish government. Bofors and Hägglunds started to work on some projects involving tanks, both with and without turrets. Nevertheless, their first version had one. The Swedish authorities required a low-profile and turreted vehicle that would be able to pack a 105 mm gun while not exceeding the combat mass of 20 tons. And all that for a reduced cost, obviously. This project was labelled UDES 14. 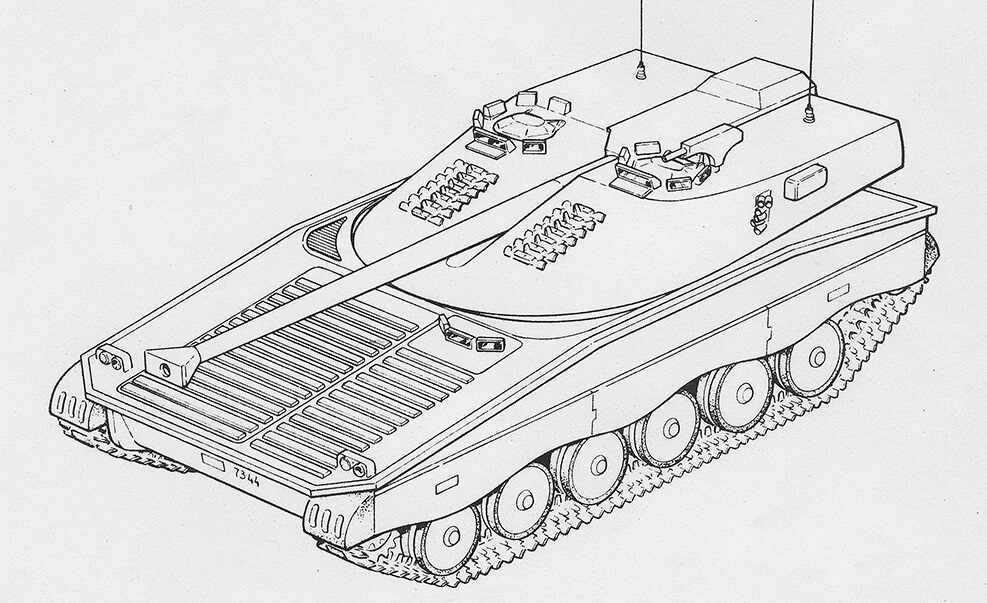 UDES 14E2, one of the projects pitched to the Swedish authorities

Hägglunds provided five proposals, that all used as many components from the already existing Ikv 91 as possible, and Bofors designed four other. Two of them already featured an interesting hydraulic suspension. In the end, both the UDES 14E from Hägglunds and the UDES 14-2 by Bofors were selected.

Both vehicles boasted a turret and rifled 105 mm guns. Everything else about these tank prototypes was really different: for example, the crew layout. Over the months and through different variants, the two tanks evolved into the UDES 15 and 16, before they finally got merged into one, the UDES 15/16 – keep it simple, right?

In 1974, engineers planned to equip this tank with a unique hydraulic suspension chassis, allowing it to drastically increase the vertical angles of its gun. Would the UDES 15/16 and its successors have been made, the plan was to conduct them into mobile combat and Shoot and Scoot tactics. Indeed, with their suspension, these tanks would have been able to fire without exposing much of their profile.

The fate of the UDES

Sweden pushed forward in the UDES direction, with the development of the UDES 16 - an evolution of the UDES 14E2 previously offered by Hagglunds. This tank was even smaller in profile, hence its somewhat futuristic silhouette.

At the end of the day, neither of these tanks were ever made, although some got close to the wooden prototype. Why? The real reasons are still kept secret, but we can suppose that the concepts offered by the Swedish companies were probably too advanced to be cost-effective.

Fortunately enough, you will soon be able to try out the unique features of these Swedish tanks in World of Tanks!