The Škoda TVP T 50/51 is soon going to make an appearance in World of Tanks. We have already introduced you to the in-game incarnation of this vehicle, now it is time to learn more about its real historical background.

The project started off in January 1948 as two separate ones. The T 50 was a Škoda project and the T 51 was developed by ČKD. The initial plan was to have a highly mobile 35 ton tank with solid protection and as powerful a 100 mm gun as possible. The tank was required to be powered by an air-cooled diesel engine capable of operation in any climate conditions.

Finally, in September 1949, Škoda handed in the initial project of their T 50 including a wooden mock-up in 1:1 scale. This version was not received well by the army though. It wasn’t so much the technical parameters as the unsuitable tactical attributes. It was thought to be too tall and too heavy. By December, a new mock-up in 1:10 scale was build, however the beak-shaped frontal hull was declined.

At this point, the ČKD and Škoda projects were integrated into one and the development of individual components was assigned to each company. While the hull was unified, both companies were working on their own engine, transmission, steering, fuel tank, seats and other equipment. Škoda was exclusively assigned the development of the turret and the gun.

During the development, there were additional requests for building armoured-vehicle-launched bridge, flamethrower and mine-clearing variants on the same hull, however they were never built in the end.

The final project was approved in February 1950. The TVP was compared to the T-34/85, which showed that the more advanced TVP had far better mobility and the gun was able to penetrate 140 mm at a 60° angle and a distance of 1,000m, while the gun of the T-34/85 could penetrate only 95mm under the same conditions. 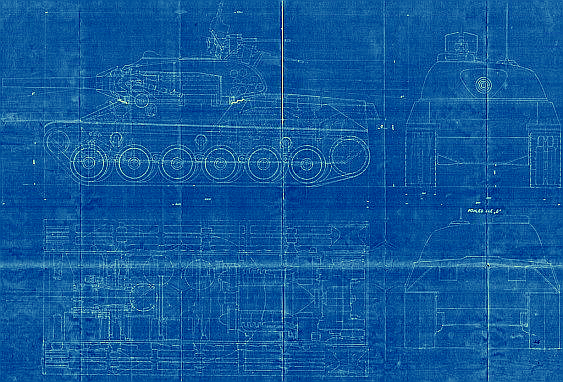 1,799 of these vehicles were planned to be built, however the project was cancelled in March 1950 and only the engine development was to continue. The reason behind this decision was that the Czechoslovakian army, already under the influence of the USSR, decided to use the T-34/85 instead. These tanks were produced in Czechoslovakia under licence. In 1955, the first T-54 tank was received as a sample for licenced production, ending independent Czechoslovakian tank development.

Help to bring the tank to life in the game!