As you know, wheeled vehicles (or armoured cars) were introduced in World of Tanks with the latest update. This new class doesn't just come with new mechanics and a different gameplay, they also have a rich history. So let's take a look at how they evolved from the point of their introduction to their role in military conflicts.

Wheeled vehicles appeared at the turn between the 19th and 20th century. As is often the case with military innovations, the armies around the world reacted cautiously to this new invention, so they didn't see action until World War I (also known as The Great War), and even then, the new tanks were the top priority after their introduction in 1916.

One of the first armoured cars was a variant of a civilian vehicle. For example, the United Kingdom turned the iconic Silver Ghost from Rolls-Royce into a combat vehicle, armed with a 7.7 mm machine gun, and its armour was only 8 to 9 mm thick. 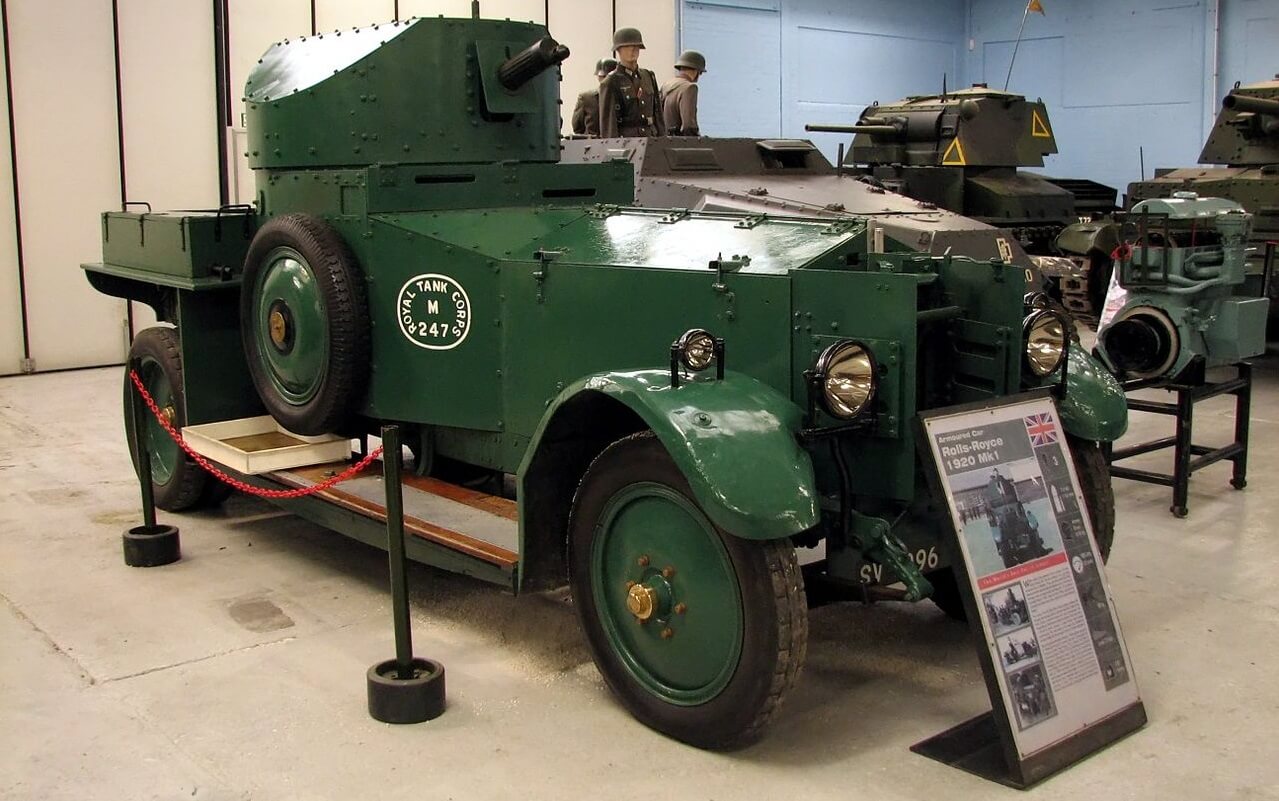 On the other side of the Channel, France, a strong believer in the concept, was trying to export the Archer, named after the French businessman Joseph Archer, – not to be confused with the quirky British tank destroyer – which fought during World War II. This vehicle was fast (up to 60 km/h), and also equipped with a machine gun.

Facing those vehicles at the start of The Great War, Germany responded with the Büssing A5P, a large vehicle with no less than 10 hatches for machine guns. But in the end, only three guns were permanently attached to it, whereas the rest had to be filled by a (10 men!) crew moving from one firehole to the other – not very reliable, right? 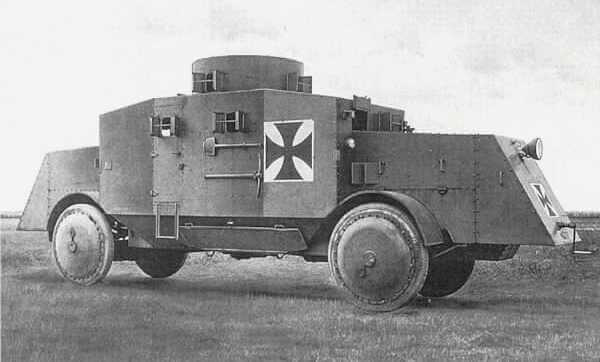 Russia doubled-down on this with even bigger armoured cars, or should we say trucks, since they were based on 5 tons Garford trucks imported from America. Strong, and packing a 76 mm anti-assault canon, as well as 3 Maxim machine guns, these cars turned out to be resilient enough to fight not only during The Great War but also the Soviet Civil War, and other minor conflicts until World War II.

For the United States, the war started in 1916. And yet, they were pretty quick to form their first division of armoured vehicles. Thanks to the Bethelem Steel company, a 40 vehicles squadron of armoured cars paraded in New York that year.

Many countries tried to push for more armoured cars. However, because World War I was fought in trenches, tanks were the best option, as they could break through them. Additional drawbacks of these early vehicles were that they needed acceptable roads, chains to cross snow, and even... horses. Indeed, armoured cars had to be delivered by these animals to prolong the lifespan of their engines, and avoid making too much noise so that the enemy wouldn't detect them.

If The Great War hadn't turned into a trench conflict, the armoured cars would have played a major role. But they had to wait 20 more years to shine as a concept. In 1939, the wheeled vehicles had clearer goals – for example, looking out for enemies – and more well-defined purposes.

From a technical point of view, Germany's and France's armoured cars were the best at the time. The Panhard 178 was a powerful four-wheel drive (4WD) vehicle, equipped with two control posts and a 25 mm gun. Germany had its own 4WD vehicles, such as the Sd.Kfz.221, 222, and 223, and even bigger machines based on an 8x8 chassis. 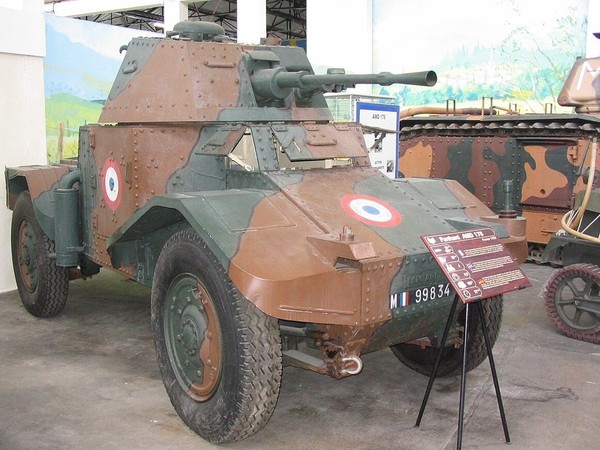 The Soviet Union also had the BA-20M and the BA-10A, with the latter featuring a proper cannon. Later on, a lighter vehicle took the spot as the main wheeled vehicle of the Red Army during World War II: the fast BA-64.

In the end, the North-African front became the main battlefield for wheeled vehicles. To defeat Erwin Rommel, the legendary German general, in the desert the British Army had to use armoured cars over tanks. They were faster, easier to use, and could operate on a larger radius. The Italians knew it as well, and used their famous Autoblinda AB41 in battle. 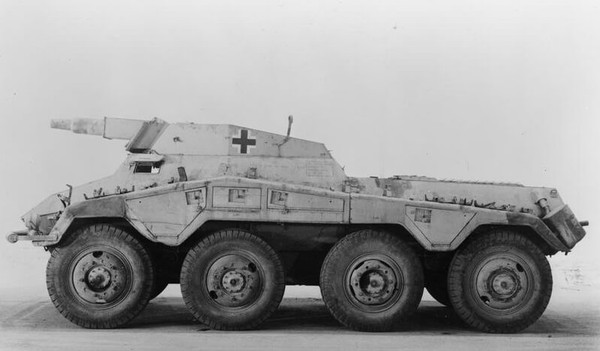 Armoured cars were so useful in this environment that the North-African front gave birth to a new class of wheeled vehicles, that we would call "wheeled tanks". These machines were still manoeuvrable, but their weaponry was close to actual tanks. The British deployed the AEC as well as the T17E1, better known as Staghound. On the Axis side, the Sd.Kfz.234 family was developed for the desert and turned out effective enough to fight successfully across Europe.

The results of World War II had different effects on the opposing nations. Even though armoured cars turned out to be quite useful during the conflict, not every nation was fully convinced. For example, the USA never developed "wheeled tanks", and the concept of armoured cars itself remained quite understated for years.

On the contrary, the British continued to develop light armoured cars vehicles, like the Saladin. 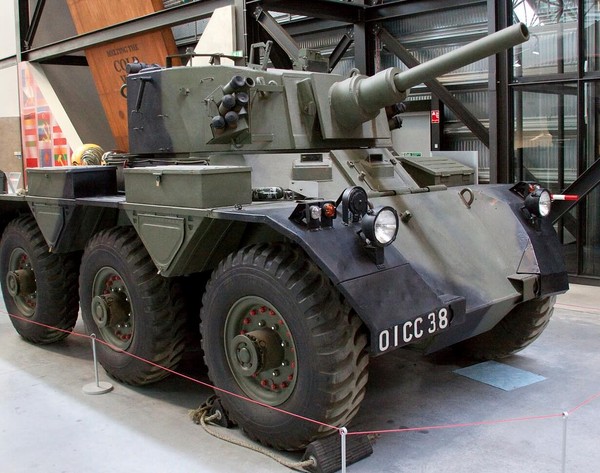 The Alvis Saladin (in the RAF Museum of Cosford). [5]

As a strong believer in armoured cars from the very beginning, France actually developed plenty of armoured cars, including vehicles close to the famous "wheeled tanks" like the Panhard EBR series, now available in our game!