With our latest Top of the Tree event, we're celebrating the Centurion tank and its whole line. Moreover, since this British vehicle is one of the most influential tanks of its time, we thought a small article about its backstory was in order. So grab your gladius and unfold the secrets of this machine with us!

Just like any good idea, the concept of the Centurion is actually a mix of two already existing inventions: the cruising tank and its strength, plus the reliability and reasonable weight of infantry tanks. Every battle involving His Majesty's tank forces during World War II taught the British Army that they could use something, let's say, well defended but still mobile, potentially with a powerful gun.

Luckily enough, the British Army was already equipped with the 17-pounder gun, a reliable and strong weapon. The Army just needed a tank on which to equip it, and so they ordered the "Cruising Tank A41" on 7 October, 1943. At this time, the tank was envisioned as a 45-ton vehicle, protected by three inches of frontal armour, good angles of inclination, and propelled by a 650 horsepower engine.

The first objective of the A41 trials was to secure reliable protection of the tank and its crew against enemy guns, including the famous 88 mm. Another goal was to equip this tank according to rising threats - like anti-tank artillery and infantry. First, the A41 received a fast-firing 20 mm gun, which was eventually replaced by a paired machine gun. Finally, the Departement of Tank Design had to find an engine powerful enough to give life to the tank, and chose the aviation engine Meteor for this mission. 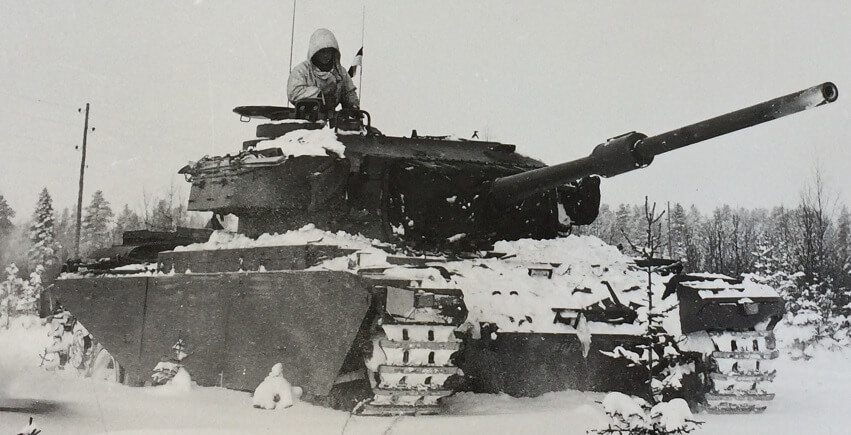 Imported in Sweden, the Centurion had to endure the snow

In February 1944, two dozen prototypes were ordered to the state-owned enterprises of Woolwich and Nottingham. However, due to the opening of a new front in Europe, the production only started a year later: in January 1945. In the meantime, all factories were dedicated to building or repairing already existing vehicles. Thus, the first A41 arrived on test in April 1945 and it was finally bearing the proud name of "Centurion". The trials were successful, and the Brits pushed their tank to Belgium in July 1945 to try it with further exercises.

The Centurion proved to be worthy of its attention, and the Army ordered no less than 800 tanks after the tests. One hundred of them would be equipped with a 17-pounder gun and a 7.92 mm coaxial machine gun, while the rest would be armed with a bigger 20-pounder gun. Production started in November 1945, and the first vehicle joined the Army only a few months later, in February 1946.

The Centurion's baptism of fire would have to wait until November 1950 though. Far from the shores of Britain, three squadrons of Centurion Mk.3 arrived to the Korean peninsula. A real challenge for the tank and its crews: winter was harsh, and the terrain, mainly composed of swampy rice fields, difficult. But in the end, the Chinese competition was no match for the Centurion.

The Tank with a Thousand Faces

Just like any tank, and particularly vehicles born after the Second World War, the Centurion was produced in many variants. We briefly mentioned the first three. The Centurion Mk.4 packed a 95 mm howitzer but was never mass-produced. The Centurion Mk.5 switched its Besa machine guns for a 7.62 Browning, the gun chose by NATO to unify its equipment from country to country. This fifth version also packed an ejector on its cannon barrel and a trailer with extra fuel.

Centurion Mk. 5/1 RAAC in the game

Another famous variant is the Centurion Mk. 5/1 RAAC (Royal Australian Armoured Corps). In the years 1968 to 1971, two platoons of these vehicles fought in South Vietnam, where the tropical weather changed even the look of the Centurion. The dense vegetation and the temperatures forced the crews to reinforce the boxes on the tank with steel strips or spare support rollers. Moreover, crews had to cruise with the hatches open, because of the heat. This and the intensive use of anti-tank mines in guerrilla warfare put several Centurions out of order, but three-quarters of the tanks remained ready for battle during the Vietnam War.

During the Six-Day War, in 1967, the Centurions bought by Israel (one of the main importers of this tank) broke through the Egyptian defense, where their speed, reliable toughness, and firepower were put to good use. Therefore proving that despite its numerous variants, the tank remained true to its original concept: a fast-moving and yet tough vehicle.

The Centurion continued to evolve year after year and battle after battle. The introduction of the L7A1, a 105 mm gun, was a massive step in the development of the vehicle. Its body armour was also increased, and new technologies were tested on the trustworthy Centurion, like infrared devices that allowed the tank to fire in the dark. Equipped with a powerful 105 mm cannon, additional armour, and an IR view, the iconic Mk.7/1 was one of this new generation of Centurions, for example.

Centurion Action X in the game

That said, not all the modifications of the Centurion were massively produced. The Centurion Action X, for instance, was supposed to introduce new features to the reliable machine but was only made in two prototypes. Despite such projects, the Centurion was produced in more than two dozens variants, which allowed it to live a long life. It is still in service in some countries, and went through local wars in Asia, Africa, and the Middle East.