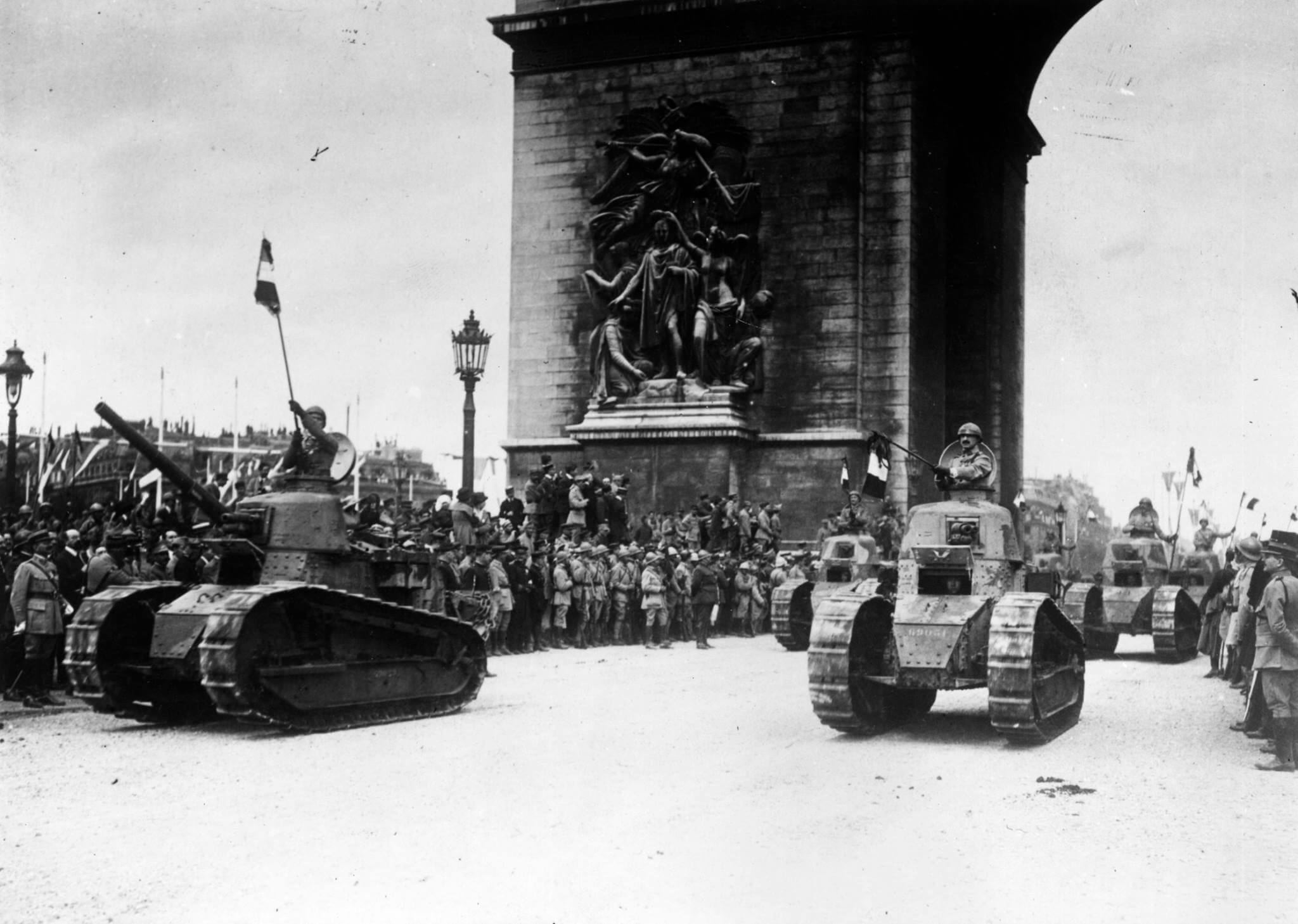 Renault tanks on Bastille Day in 1919

Every year on July 14, France celebrates the national holiday known as Bastille Day with stunning fireworks displays and triumphant parades, including the largest regular military parade in Western Europe. The origins of this holiday can be traced back to the turbulent days of the French Revolution, when, in 1789, the people of Paris stormed and captured the fortress of Bastille, a symbol of the strict royal authority imposed over the city.

This bold act of resistance had a significant impact on the minds of all French people, as the only system the country had known since the 1500s unraveled astonishingly quickly. 150 years later, the French—and Europe as a whole—faced another threat of oppression. Fortunately, they prevailed once more.

Victory in the Second World War demanded immense resilience and spirit to overcome the German and Axis war machines. Although France surrendered early into the conflict, the nation's people and fighters displayed these qualities time and time again, never giving up on freedom.

Discover the plucky French tank that took on 13 Panzers solo and the cryptic messages of Radio Londres with two tales of bravery and ingenuity, and claim your free customizations below to mark the day of French National Celebration!

While France’s war against Germany started on September 3, 1939, following the invasion of Poland, it wasn’t until May 1940, with Germany’s invasion of Belgium, that France truly found itself at war. Allied forces had expected Germany’s first push to come through central Belgium, as it had in World War I, and duly prepared to counter this threat.

German invasion into Western Europe in 1940

Instead, the main German attack came through the Ardennes Forest in southeast Belgium and northern Luxembourg. This meant that French forces were largely scattered and out of position, and when they met the advancing German army in Stonne on May 15, they were heavily outnumbered. 90,000 German infantry and 300 tanks arrived in the small French village, a strategic location on the road to Sedan. Facing them were 42,500 French soldiers with 130 tanks.

Stonne quickly became the site of intense fighting. Within the first day of battle, the two sides traded control of the village seven times, with the Germans prevailing at the day’s end. This back and forth continued across the two-day engagement—a determined display of stern resistance and resilience by the French. But the valiant efforts of one tank and its crew stand out. 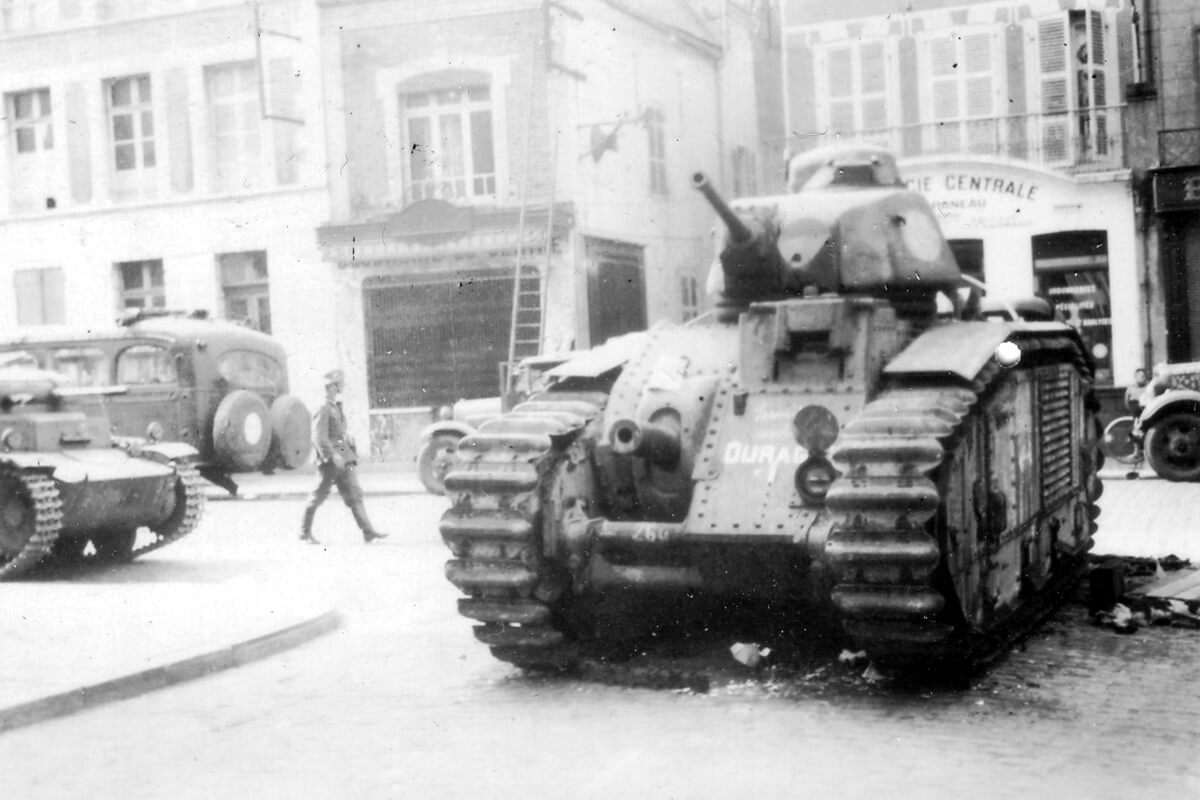 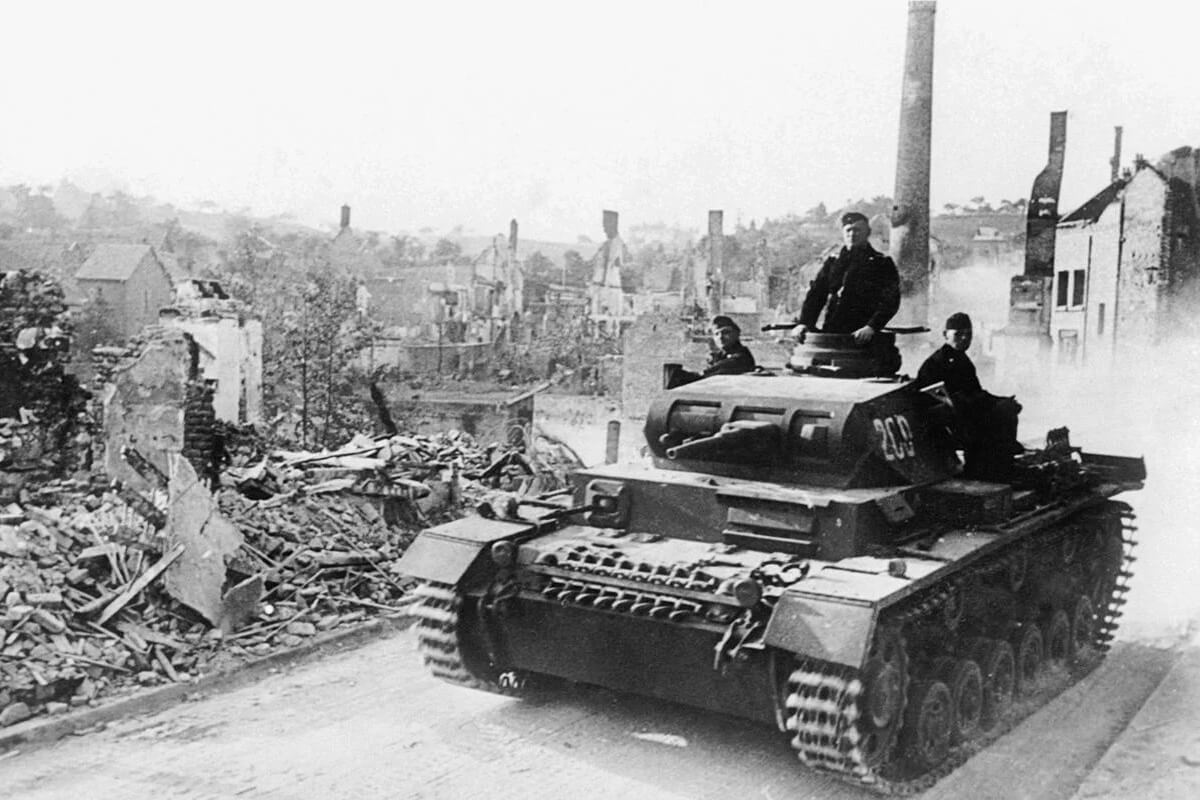 The Char B1 bis was the premier French tank at the time. It was produced between April 1937 and June 1940 and was an upgraded variant of the standard Char B1, with thicker armor and stronger offensive capabilities. These improvements turned out to be crucial for both Commander Pierre Billotte and Stonne.

Holding the town on the morning of May 16, 11 Panzer IIIs and two Panzer IVs were positioned behind ruined buildings as they prepared to ambush the next French assault. It came a few hours before dawn as Pierre Billotte’s lone Char B1 bis, nicknamed Eure, trudged around a corner and into the sights of the 8th Panzer Regiment company. 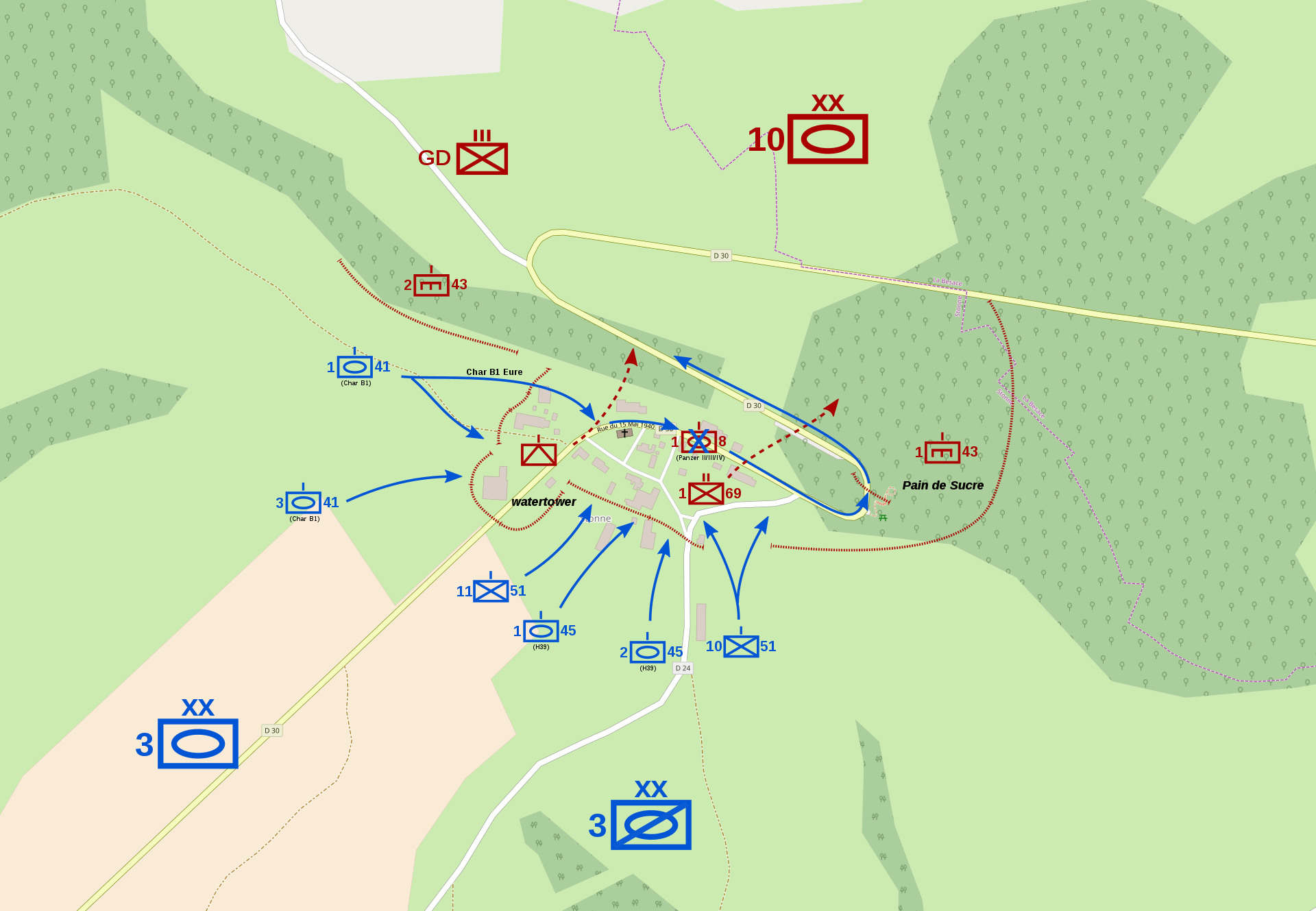 Moments later, Eure’s driver, Sergeant Durupt, fired the hull’s 75 mm howitzer and hit a distant Panzer III at the rear of the column. Closer at hand, Commander Billotte targeted the smaller 47 mm high-velocity cannon onto the lead tank only 30 meters away and took it out. With the enemy trapped between their disabled comrades, a head-to-head firefight with Eure ensued.

An onslaught of rounds engulfed the French tank, but the Panzer IVs were too far away to penetrate the tough armor, and the weaker Panzer IIIs' guns succumbed to the same failure. In total, Eure withstood an incredible 140 direct hits, battering its armor but leaving its crew without a scratch. Amid the furious-yet-failed ambush, they reloaded the Char B1 bis' two guns and kept firing, eventually destroying all 13 Panzers before condemning a number of anti-tank guns to the same fate.

Thanks to Eure and the other Char B1s that rolled in to secure the town, Stonne was back in French hands by 7:30 that morning, and it would remain so until that evening. Even though the end of the conflict saw the German flag flying over the village, the Battle of Stonne was a defensive victory for the French. From May 15 through May 17, control was exchanged 17 times, and that is a true testament to the resolve shown by the French forces, Pierre Billotte, his crew, and their tank.

These heroics are commemorated in World of Tanks with Billotte's Medal, a rare in-game Epic Medal achieved for destroying at least two enemy vehicles while having five different modules damaged or crew members injured and losing 80% of your HP.

The French Speak to the French 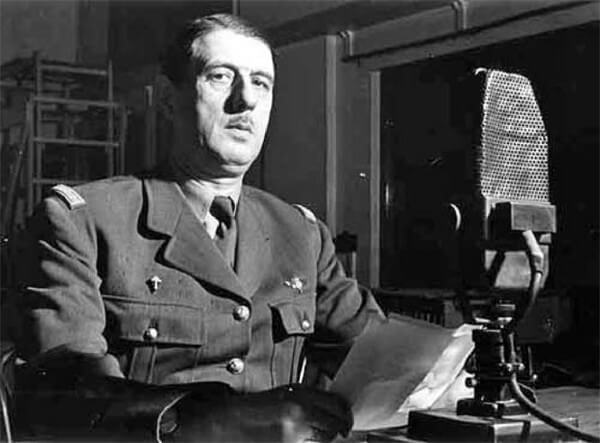 Despite the firm resistance of Pierre Billotte, his crew, and scores of French servicemen, France fell to Germany only a month later. At midnight on June 17, 1940, Marshal Philippe Pétain requested a peace agreement with Germany, conveying the French government’s intentions to the public soon after. On June 22, France signed an armistice agreement with Germany, surrendering control of the north and west of the country, including Paris.

Following the initial June 17 announcement, General Charles de Gaulle gave a speech known as the Appeal of June 18, rallying the French people and calling on them to not give up the fight despite their government’s course. The radio message was broadcast from London, where de Gaulle had fled to, on the British Broadcasting Corporation—or the BBC. It is famous in France and is considered to have marked the beginning of the French Resistance in World War II.

“But has the last word been said? Must hope disappear? Is defeat final? No!”

And yet, despite its significance in France, there is no recording of this speech. Historians have established that it was heard by only a small number of people compared to de Gaulle’s June 22 address after the armistice agreement. The doctrine behind the speech became the foundation for Free France, a political entity that claimed to be the legitimate government of France, led by de Gaulle from exile in London. This call to arms prompted French people who were also dissatisfied with the armistice to join the Resistance, while others left for the United Kingdom to join the Free French forces.

Naturally, the refugees who crossed the English Channel were eager to reassure their relatives back home and support their plight. Their means to do so was the BBC, which was already broadcasting French-language news bulletins that were more popular in France than local stations under occupation control. First entitled "Ici la France" and then renamed to "The French Speak to the French," the show was devoted to news from the front and current affairs, with personal messages starting or ending the broadcast.

Over time, however, these personal messages became bizarre and sometimes amusing. For example, two short messages went like this: "Jean has a long mustache," and "There is a fire at the insurance agency." Although seemingly trivial and innocent, these coded messages were the brainchild of Georges Bégué, a Special Operations Executive (SOE) operative who wanted to communicate with Resistance groups. 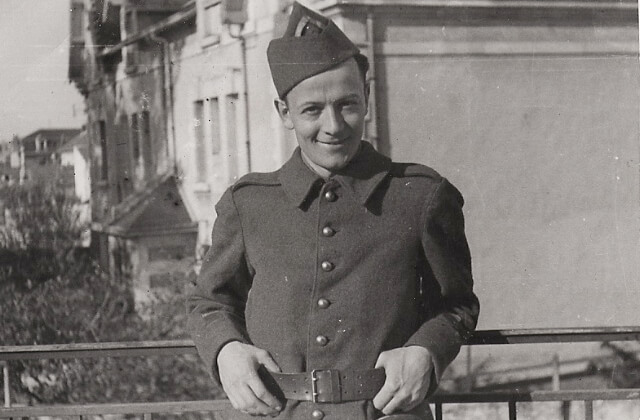 The messages delivered secret information and updates to teams in France without the knowledge of German counterintelligence services thanks to predetermined formulas. They were made up of one or more key phrases and could be down-to-earth, derived from literature, or even totally absurd.

This meant the broadcasts were a versatile tool, and operational messages could convey various information. These are some examples:

Nobody knows exactly how many coded messages were broadcast by the BBC for French-speaking listeners between June 1940 and November 22, 1944. There are no audio recordings, and transcriptions are limited—if agents had written down the messages, they might as well have signed their own death warrants. Yet the impact of the radio messages is evident.

The French Resistance played a significant role in facilitating the Allies' rapid advance through France following the invasion of Normandy on June 6, 1944. During the German occupation, the Resistance also planned, coordinated, and executed acts of sabotage on the Nazis' power grid, transport facilities, and telecommunications networks. The Resistance's work was politically and morally important to France both during the war and in the decades that followed.

We hope you've enjoyed hearing about the impregnable

Char B1 that survived 140 direct hits and destroyed 13 Panzers, and also about the consequential impact of nonsense radio messages broadcast by the BBC. Both tales have their share of intrigue and surprise, and they are great stories for learning about the French plight in World War II.

Add some extra patriotic flair to your French vehicles, or give the rest of your Garage a multinational makeover, with 12 free customization items! Claim them by logging in to the portal and then clicking the button below.