About 800,000 women served for the Red Army during World War II. Most of them fought directly on the front. Some were lucky enough to fight on the sidelines, like the women trained in anti-aircraft units. Mariya Oktyabrskaya, however, was sent to the middle of the action.

How did she land there? The story defies any piece of fiction. In 1905, Mariya was born into a poor family. This itself is an understatement because, at that time, she was considered a serf – a fancy word for slave. Coming from such a background, she welcomed communism - which gave her education, two jobs, and even a husband.

Birth of the Fighting Girlfriend

In 1925, she married Ilya Oktyabrsky, a Soviet army officer. That's when she began to acquire a taste for military life: she was trained as a nurse, learnt how to use weapons and drive vehicles. A great soldier in the making.

When Nazi Germany invaded the Eastern Front, her husband fell in battle not too far from Kiev in August 1941. Communication was pretty erratic at the time, and so the news took two months to reach her. With nothing but vengeance in mind, she sold all of her possessions to build a T-34 tank for 50,000 rubles. 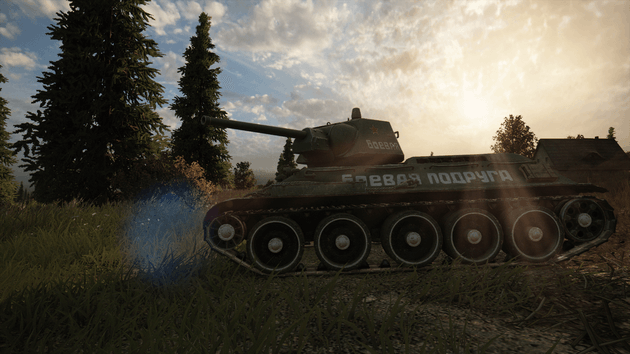 The Fighting Girlfriend, as pictured in World of Tanks: Mercenaries

This isn't unusual for the time, but Mariya Oktyabrskaya made her contributions under two conditions: she wanted to name and drive the tank. She even asked Stalin himself for this, which he accepted. Mariya was lucky enough to receive a complete five-month training when most tankers were sent directly to the front. She was now a driver and mechanic.

She was also a publicity stunt, according to most of the Red Army soldiers. They would soon eat their words. Her tank, the Fighting Girlfriend ("Боевая подруга"), was sent to Smolensk to crush German resistance. There, the vehicle took a hit, and despite orders, Mariya jumped out of the tank to fix it under enemy fire.

This event won her the respect of her male comrades. Sometimes, respect is not enough though, and you have to add a rank to confirm it: she was promoted to Sergeant.

A month after that, in Vitebsk, she attacked enemy defence positions and once again popped out of the tank to fix it. The Fighting Girlfriend was momentarily disabled by artillery shells, but Mariya kept the fight going.

Hero of the Soviet Union

Her reputation was growing quickly, but the Leningrad-Novgorod offensive would prove to be her last. There, Mariya and her crew swept through trenches, destroyed German positions, and even took out a self-propelled gun. But the Fighting Girlfriend took a hit for the third time. Its tracks needed some care, and so Mariya Oktyabrskaya jumped out of the tank to repair it again. This time, she was hit.

She lost consciousness and never found her way back. Mariya remained in a coma for two months and ultimately died on 15 March 1944. Her tank outlived the driver: in the chaos of the battle, Mariya managed to repair its track, and the T-34 made it to Berlin.

After her death, she was made a Hero of the Soviet Union for her bravery. She inspired thousands of women to join the fight and contribute.