The League is live this Thursday at 19:00 CET with Utopia vs Gunrunners, followed by DiNG vs Kazna at 20:30 CET.

And remember, the WGL portal is also up and running, so if you want more information or if you are interested in what's happening in the other regions too, go check it out!

Due to a major violation of the WGLEU rules and regulations, team SWIFT has been suspended. The sanction is effective immediately and valid for the current Season, as well as for the two upcoming seasons: Season I, 2017-2018 and Season II, 2017-2018. As a result, all the matches of team Swift are nulled and they will automatically rank last at the end of the current season. For more information, please check the official notification. 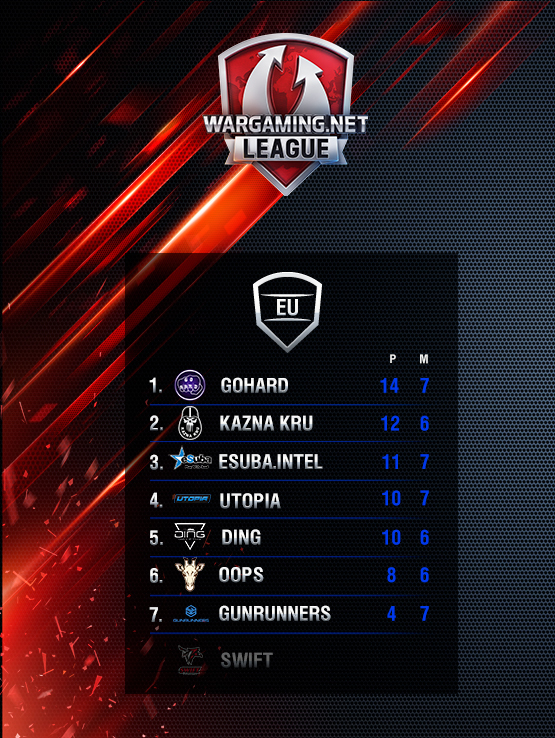 Things started well for eSuba as they were able to take both rounds on Cliff. However, Kazna tied the score on Murovanka. On Mines, eSuba should have taken the lead again, but a misplay from Pratelicek handed the round to Kazna. After that, it was all one sided as Kazna took the second round and finished the match on Ghost Town.

The teams traded rounds on Murovanka for the first map, but after that it was all one way traffic with Oops taking a commanding 4:1 lead on Prokhorovka. Utopia pulled back a round to make it 4:2, but Oops ended up sealing the deal on Himmelsdorf in a very close battle, taking the round and the match.

Everyone anticipated this clash between the top two teams, where only 1 point separated them: Swift being no.1 with 11 points and DiNG no.2 with 10. DiNG established early dominance, taking both rounds on Mines. Swift kept trying to catch up for the rest of the match, and despite some good efforts and a successful surprise push on Prokhorovka, the victory went to the reigning champions.

Considering the matches played so far, everyone expected an easy one for GoHard, but this season is full of surprises! An early mistake by Zafar, the tactician of GoHard, who allowed his artillery to be spotted and destroyed very early in the first game. This opened the door to an early lead for Gunrunners. By aggressively rushing to the centre in the following game, Gunrunners even took a two round lead. Afterwards however, GoHard woke up and eventually took the match.

On paper, this was going to be a quick match, between Gunrunners currently ranking last and DiNG, the reigning champions. But nothing was less true as Gunrunners unexpectedly took two last minute victories on Mines and Himmelsdorf. At 1:3, DiNG looked like they could pull off a comeback but with very good defensive play by Gunrunners, they secured their win. A solid result for them that should boost their confidence in the weeks to come.

GoHard came into this match with a clear appetite for victory, playing aggressively in almost every round. Overall, they took it hard to Swift - even getting a nice quick cap - which resulted in a quick victory for them.

What should have been a close match quickly turned against eSuba, with Utopia dominating on Prokhorovka and also taking the first round of Himmelsdorf. At 3-0, eSuba finally managed to make a comeback, picking up their defence. Moving into Mines though, some failed climbs from eSuba pretty much sealed their fate. In the last round, some great play from Rulezik brought back what seemed like a lost game for Utopia after eSuba attempted a push on the hill.

In this match, everybody was looking forward to seeing the star lineup of Oops finally find their game and score some points. After two maps, the match was tied at 2-2. However, things went in Kazna's favour from there, as they took both Mines and Steppes. Rough season so far for Oops.

After their performance against DiNG, everyone expected Gunrunners to have a fighting chance against pretty much anybody. This match against their direct competitor from eSuba was a good opportunity for them to turn the tides and maybe leave their last place behind. Unfortunately for them, they were severely outmatched. Always one step ahead, eSuba outgunned and outmanoeuvred Gunrunners in every round.

This match between two usually aggressive teams truly delivered. Original lineups, cap pressures, fast pushes and smart play - the match had it all. This was one of the most entertaining games yet, this season. Want to know the outcome? Go watch it!