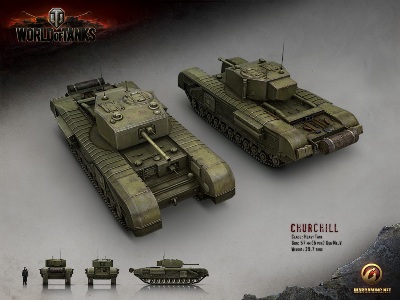 Why did Churchill claim that the tank possessing his name had more faults than the politician himself? You will find it out from the latest blog post. The story of Churchill tank, it’s advantages and faults are described in the article.

“The history of the heavy infantry tank Churchill started in September, 1939 when a technical design specification for A20 was developed in the General Staff. It was meant to substitute the heavy infantry tank Mk.II Matilda which was in large-scale production at this period. The necessity of the new more powerful combat vehicle was justified. WWII was starting and the British troops headed for the continent and their ways led to Siegfrid Line…” the article goes.

To read more, go to our blog. And if you want to see what Churchill looks like, check out the Art Gallery which was enriched with the renders of Churchill tank.