The result of a battle depends on each tanker in a team. Perception, reaction time, a clear understanding of their roles in battle - all this and much more hastens victory for your team. For players in a platoon the responsibility of choosing potential allies influences the outcome of a battle even before its start - at the stage of a platoon forming and the choosing of vehicles. After all, depending on the platoon’s line-up, it can both strengthen a team with their coordinated action and weaken it with an incorrectly chosen platoon line-up. Especially if in a platoon there are vehicles with significant differences in Tiers.

With the release of update 9.15 , coordinated tactical action of players in platoons will be encouraged. Participants of a formation consisting of vehicles of the same Tier will receive XP bonuses. And the platoons that have multi-Tier vehicles (the difference between the maximum and the minimum Tiers is more than 3) will get EXP penalties depending on the difference in vehicle Tiers. When trying to roll out to a battle on vehicles of different Tiers (with the difference more than 3) players will get a warning about the incorrect selection of vehicles.

The XP bonus will be given to the platoons that consist of vehicles of the same Tier. The award depends on the result of battle, victory or defeat, as well as on the Tier of vehicles in a platoon. Dynamic platoons created during a battle will get XP bonuses for playing with vehicles of the same Tier starting from the next battle. If a player joins a previously formed platoon, they will receive an XP bonus only starting from the next battle if necessary conditions for this will be met. 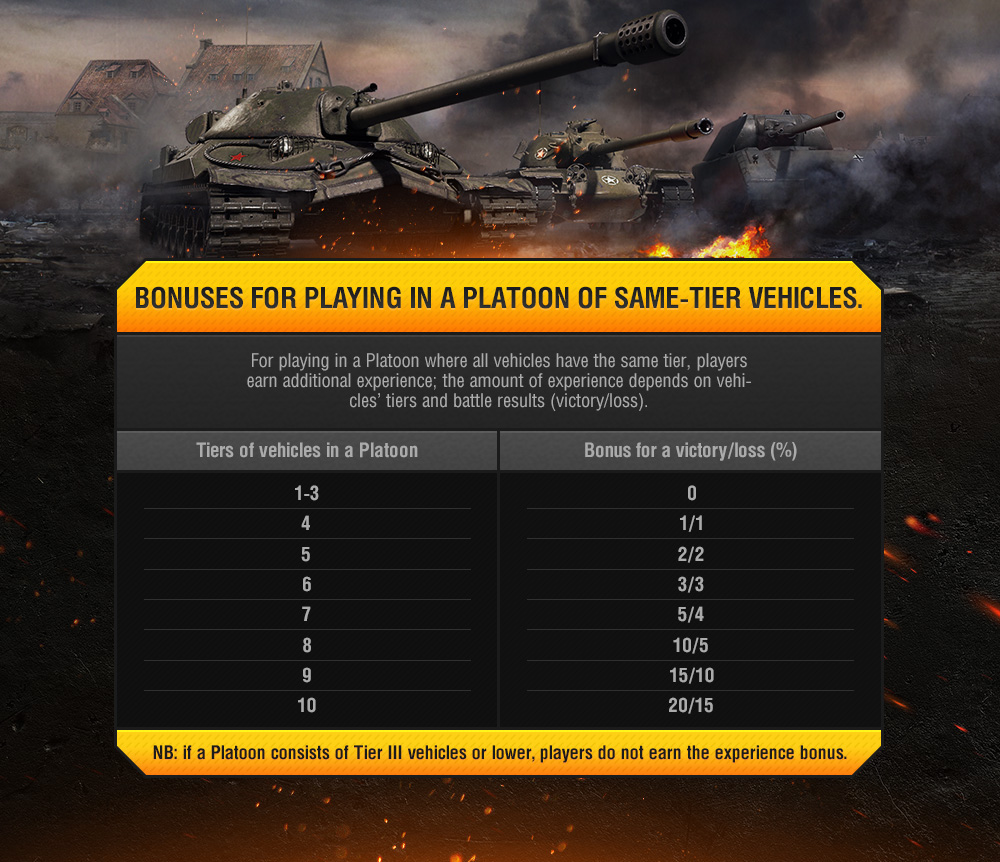 If a platoon of multi-Tier vehicles joins a tank during a battle, a penalty after the first battle will be applied only to the players that have created multi-Tier platoons in the Hangar. 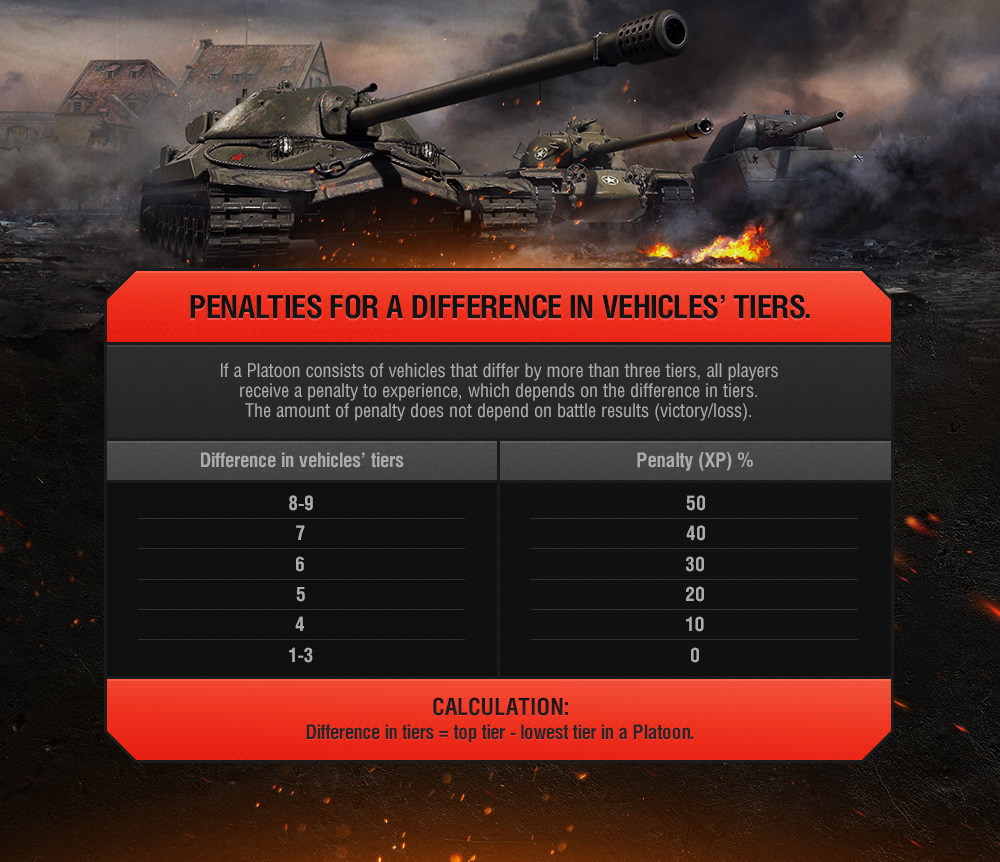 Why do we need this?

The reward for platoons with vehicles of the same Tier will be an incentive for players to unite and to act in a battle more effectively. Our goal is promotion of collective actions. Moreover, for that the game already has a mechanism of dynamic platoons and further it’s planned to make new improvements that will simplify the searching for and formation of platoons, as well as the ability to automatically form platoons with friends and some other improvements.

Solo players have been, and are, an important part of our game. However, we want to motivate lone wolves to discover a new side of World of Tanks – to try the game in platoons, as coordination and joint actions are the things that allow the participants of virtual battles to develop, and platoons are the most appropriate tool for this.

Platoons with vehicles of different Tiers are a demonstration of ungentlemanly conduct, for which very soon penalties will be imposed. Penalties will allow inexperienced or irresponsible players to see about the need for a balanced approach fwhen choosing vehicles before battle - vehicles of the same Tier make a platoon an effective tactical unit, which is not a burden on their team.

Further on in development we will be moving towards platoons of the same Tiers and will disabling the ability to go into battle within a platoon of vehicles of different Tiers. This will allow us to make necessary improvements to the team matchmaking system. Unlike the already existing one, that forms teams depending on the queue to a battle within the server, the new system will be more focused on the equality of the opposing teams by Tier and type of vehicle. It is planned that the teams will be formed on the principle of 3-5-7: 3 top-Tier tanks for the battle, 5 medium Tier tanks and 7 tanks of the minimum Tier.

Such a matchmaking system will not only solve the problem of balance inequality within opposing teams, but will also affect the gameplay of Random Battles: by encouraging the tanks’ full potential in battle, regardless of its positions in a teams’ list. The new matchmaking will increase the impact of any part of the teams’ list (top, medium or lower Tiers) on the outcome of battle.

More detailed information about the new matchmaking system will be published on the portal later.

We will carefully monitor the statistics and your response to this new feature. Based on the results of the analysis of the collected information, further development of this functionality will be made. Share your feedback and help us make the game better.