Since we invited you to play test 9.17, we gathered plenty of feedback on a variety of potential adjustments. We analyzed your suggestions and improved a few elements—all resulting in a set of tweaks that you can check out by joining the 2nd Common Test:

The Löwe gained another boost: a more powerful engine and thicker armor. In addition to that, acting on your feedback, we improved the combat parameters for 4 more Premium vehicles: the American T34 and T26E4 Super Pershing, the M46 Patton KR, and the Chinese 112, as well as for two French heavy tanks: the АМХ 50В and АМХ 50 120. Left-click the image below for a detailed rundown: 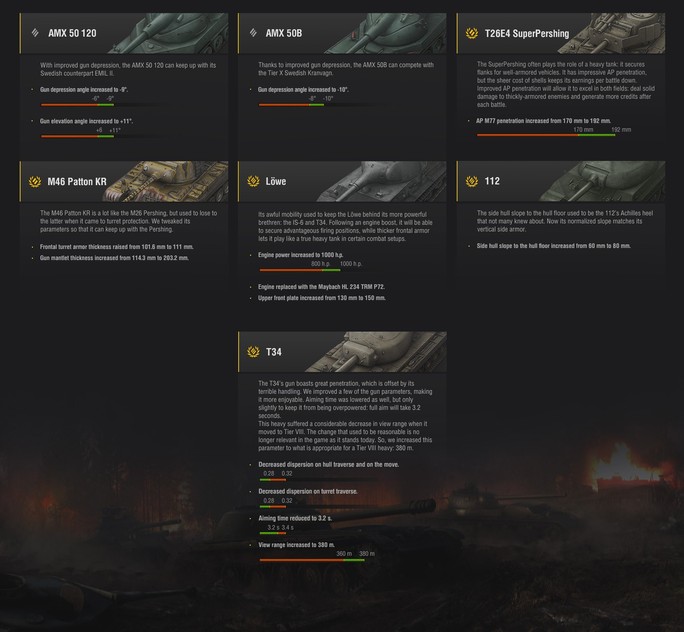 Based on your input from the 1st Common Test, we decided to postpone the overmatch and ricochet mechanics revision, initially planned for 9.17. This postponement (explained in more detail below) called for a number of adjustments to the tier IX–X Swedish tank destroyers.

Under the current ricochet and overmatch rules, they are extremely vulnerable to shells that are 3 (or more) times the nominal thickness of their armor. To fix that we tweaked their combat parameters boosting their overall durability and reducing the cost of errors in-battle. These changes are designed to make them more fit for short and mid-range combat; while keeping them from getting overpowered.

Designed to ensure enjoyable gameplay for tier VIII–X Swedish tank destroyers, the mechanics revision was shown to you during the 1st Common Test. You generated an impressive amount of feedback, providing us with plenty of in-game data and a number of reasonable suggestions on the new setup. This feedback allowed us to conduct a quick analysis, which showed that the reworked rules could influence the overall game immensely. They could lead to some deeper changes to vehicles strong and weak spots: a lot more ricochets where chances of them used to be zero.

As part of 9.17 we created new elements for Swedish tank destroyer aim reticles. The work on them caused a bug that affected aim reticle sizes of all vehicles. You might have noticed it during the 1st Common Test. We fixed it in the 2nd Common Test. The aim reticles are now back to what they used to be in 9.16.

We’ll continue to tweak mechanics and respond to feedback leading up to the release of Update 9.17. So, if you haven’t enrolled for the Common Test yet, it’s about time you do. Jump in, play test new features and share your thoughts with us!

Scroll down for the full list of the patch notes for the 2nd Common Test.

Discover how you can join the Common Test:

How the Common Test Works

Eligibility: All players registered prior to 23:59 FET (20:59 UTC) November, 7th can participate in the test.

Feedback: please post your general feedback about the test version and bug reports in the special thread on our forum.

The test server will be restarted regularly, according to the following schedule:

The test server may be subject to unscheduled restarts and maintenance.

Full list of patch notes for the Second Common Test

Full list of patch notes for the First Common Test

We’re looking forward to hearing your feedback in our dedicated forum thread. Stay tuned for more news on Update 9.17!

Collapse Expand
Discuss on Forum
Next
Select a region
Selecting another region may affect the website content.