With so many new nations joining the World of Tanks family lately, we have had little time to focus on the smaller additions that our developers made to the already existing tech trees in the game. Today, we intend to right that wrong by featuring the T71 American Tier VII light tank as our Tank of the Month. Discover the unusual characteristics of this vehicle, and learn to love it while we give you a bonus for driving it all month long!

Little is known on this unusual US tank because the T71 never actually made it out of the factory and onto the battlefields. It suffered the fate of many interesting vehicles that were thought up in the post-war era, when the US tank manufacturing industry was very rich in ideas but became increasingly poor in funding. Armed with the experience gained from the industry’s previous rapid expansion, the US engineers were looking to improve their entire line-up of light, medium and heavy tanks, and try out new and sometimes experimental designs on them. When some of those experiments didn’t turn out quite as everybody had hoped for, projects were quickly dropped, as in the case of the T71 that only existed in mock-up form and never actually saw the light of day.

The few available records say that its development began in the early 50s when the US Ordnance Committee ordered a new light tank with very specific characteristics, aimed at replacing the T41E1 –which itself had already been the improved successor of an upgrade of the experimental light tank T37. Being the third generation of an experimental vehicle, the T71 was meant to continue the same bold nature by sporting a heavy 90mm calibre gun on a 20 ton light weight structure. Manufacturers such as the Detroit Arsenal Tank Plant put forward their plans featuring an oscillating turret that would be able to handle the recoil of the cannon. This was a rather unusual technology that was only used in a couple of tanks worldwide. As the tank was meant to be carried airborne, its ultimate weight had to be reduced even further, which limited possible armament to a 76mm gun, but in turn enabled the use of an auto-loader.

The designers had bet on quantity over quality, giving the tank an impressive firing rate (before the unavoidable drum reload of course) and an ammo rack capable of carrying up to 60 shells of different types. Light-weight and equipped with a decent AOI-628 engine in the rear hull for agile quickness, the engineers thought they had created a nimble scout and artillery support tank. However, they had forgotten an important aspect: the armour. Due to the imposed weight restrictions, the tank was covered in “paper-thin” 25 mm armour which failed to impress the Ordnance Committee. Ultimately its performance just did not live up to the necessities of changing warfare of its time. The project was scrapped in 1953 with nothing but a wooden model to show for it.

The T71 in World of Tanks

The key phrases for this Tier VII US light tank are: “Stay on the move!” and “Stay out of fire!” While the first part is easy to do thanks to the powerful 400 h.p. engine, you’ll find that the latter objective is harder to achieve. The light T71 boasts an impressive maximum speed of 64.4 km/h and can even go past 70 when it’s got momentum and is cruising downhill. At times, you’ll feel you’re driving a remote-controlled toy car! The amazing swiftness will allow you to employ the classical scouting tactics, when you feel like going fast so that you can rush away and be the first to detect enemy movement. We recommend though that you always make sure to stay covered or to never slow down when doing so.

Your ultra-thin armour of up to 25 mm makes you very vulnerable to attacks from all sides. Although it’s nicely sloped at the front you will not see many bounces. Keep in mind that the matchmaking value of the T71 can make it land in Tier VIII-X battles, so more often than not you’ll be facing big-time opponents with thick armour, big guns and an itchy trigger-finger. With only 840 HP, the first shot you sustain may already be your last. On top of it all, you’ll find that your view range of 400 m means that if you’re not careful, your opponents will spot you first as you come looking for them. It’s advisable to hang back from time to time and team up with a buddy whilst escorting a heavier tank, or to start looking for weaker prey. Instead of tackling whatever gets in your sights first, you should choose your targets carefully, going for equally light tanks first or even artillery if you’re already in enemy territory. Try mixing it up to best help your team by using your speed and good rate of fire to act as a scout interceptor or to ambush unsuspecting tank destroyers.

Bear in mind though that the T71 is not good for full frontal stand-off situations! If you choose to go into close combat, you’ll need to ‘float like a butterfly’ to ‘sting like a bee’. Cruise around your enemies and let them feel the full power of your six-shot autoloader before your 16 second drum reload period. Anticipate the reload, for example by driving 270 degree pirouettes around whatever you’re firing at, and flee for safety when your magazine runs empty.

If you want to avoid that kind of heat altogether, stay close to a teammate or on the sides to try to flank your enemies from unexpected angles. For maximum fun, you can try playing in a platoon of three light tanks, overpowering lone enemies in a swarm of quick attacks before they can even decide which one of you to miss and not hit. 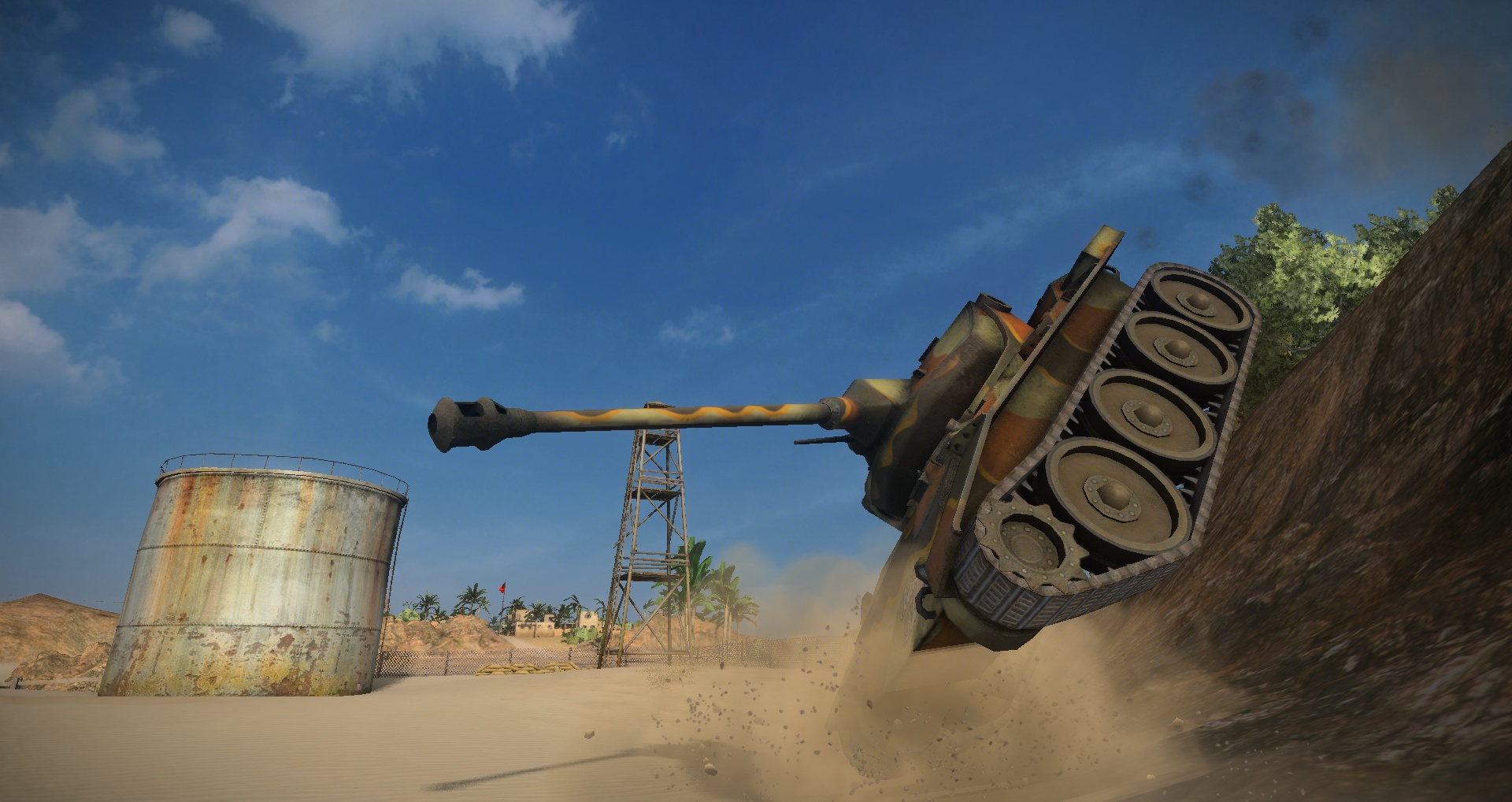 Constant movement (not too fast, not too slow) is your life-saver and main advantage. Linger on the same spot for too long and you may find yourself being ‘one-shotted’ into oblivion by a single artillery shell. Go too fast (especially when jumping down some of those ‘physics-enhanced’ hills) and you’ll lose your tracks before you even get to the action. A balanced approach, mixing scout tactics with a more moderate medium tank-like playstyle will get you the best results.

Your autoloader eliminates the need for a full crew on board your T71, reducing its service staff to only three soldiers. That doesn’t mean that you’ll have to make do without any of the helpful skills and perks of a radio operator or loader. Your Commander, Gunner and Driver pick up the slack and are also able to learn the abilities of your “missing” team members. That being said, you will probably take more time getting to them because you should max out some crucial abilities first.

Because of the scouting on-the-move profile of your tank, we recommend that you learn the following:

Again, you should focus on gear that will improve your on-the-move performance. Leave things like the Camouflage Net or the Binocular Telescope to the side! Concentrate on getting the Vertical Stabilizer first, then follow up with Coated Optics and maybe Improved Ventilation. You will need anything and everything to improve your accuracy on the move and to increase your spotting potential.

The limited upgradability of this tank offers only one additional version of each module, and will allow you to quickly seize the full potential of your vehicle. With just one turret, you won’t need to worry about finding the best out of a multitude of module combinations, which means that your tank will be at maximum potential in just four simple steps.

The stock model does a nice job in terms of traverse speed, but due to its low max weight of only 18 tons, it does not allow you to mount many of the additional equipment pieces that you will need. If you want to be able to mount equipment such as the Improved Ventilation, Small Spall Liner, Wet Ammo Rack, Enhanced Gun Laying Drive, Vertical Stabilizer or even the Camouflage Net, you’ll have to upgrade to the T71A1-model. For just 8300 XP it gives you 2 degrees quicker turns and the luxury of mounting any equipment you want without worrying about weight restrictions.

Your stock engine may only be Tier V, but due to the low overall weight of your tank, it’s still able to accelerate you nicely and keep your speed high as you turn. The upgraded version gives you an additional sixty horse power for a total of 400. You may not feel the difference straight after  installation, but it will come in handy when you play on rugged maps such as Dragon’s Ridge.

Although your stock radio is already quite good when compared to the other Tier VII light tanks in the game, you should not hesitate to upgrade it as soon as possible. Not only will you jump from a Tier VI model to a Tier X equivalent, but it will also almost double your signal range, boosting it from the original 410 to 745 metres.  Needless to say that for a scout tank, communicating your findings back to your team is crucial, and we wholeheartedly recommend that you spend the 54k credits on this very helpful little improvement.

The T71 has only got one turret, but what it lacks in diversity, it makes up for in originality – it is one of only a few vehicles in the game to have an oscillating turret. This style of the turret is made from two vertical parts that are hinged together, while the gun itself is fixed rigidly to the upper part. When the tank aims for range, it tilts the entire upper part of the turret, something which is an unusual sight to behold. In reality, there were only two widely-produced tanks that ever featured this kind of construction: the AMX-13 and the Panhard EBR armoured car. As nice as it looks though, you should not rely too much on its durability – the T71’s turret armour is so thin that it’s almost transparent. So keep your guard up at all times!

Neither of your guns are very imposing when you look at them on the stats sheet. However, being equipped with an autoloader system, they are both capable of providing quick bursts of six shots in a row. As mentioned before, you should anticipate a 12-16 second drum reload time with both models and adjust your play style accordingly.

Good to know: If you’re driving on your stock suspension and you want to mount some of the heavier equipment, you may want to consider upgrading your gun first! Not only will you gain a little bit of punch in terms of damage and penetration values, but since the upgraded version with its 646 kg is only about half the weight of the M1A2 original, you’ll also free up weight capacity, which you can then use to mount whatever you need.

Overall, both guns are about equal in terms of their on-the-battlefield performance. Don’t expect to penetrate the thickest armour with any of these bad boys. Aim for weak spots – preferably on same-tier tanks or arty – and use your full magazine to fire shots in rapid succession to gain that Master Gunner or Sharpshooter achievement!

There you go, Commanders. That’s the T71. Use it well and use it often throughout the month of March to have fun and earn extra credits!