A lot of World of Tanks players picture French vehicles as a combination of poor armour, good mobility and amazing firepower. However, there is more to French tanks than that. To demonstrate this to you, we have chosen to present one of the French tank destroyers, the AMX AC Mle. 1946. This is an amazing machine which roams the World of Tanks battlefields. This vehicle does not fit the stereotype of French machines that most World of Tanks players have, and so we wanted you to get a closer look at it. Possibly it’ll change your mind about the French and encourage you to explore the French TDs!

But first you should know what kind of bonuses we have prepared for this vehicle in World of Tanks for this month.

This project to design and create the AMX AC Mle. 1946 began in parallel with the M4 project. Both were based on analysis of the King Tiger by the French forces. The M4 was planned with a 90mm cannon, while this one was supposed to provide stronger and more direct fire support against enemy tanks. The King Tiger tanks were a great threat and the military needed a vehicle capable of taking them down. This required highly mobile guns with high penetration abilities.

Unfortunately, the AMX AC Mle. 1946 never left the drawing board and remained on the pages of history only as a set of blueprints.

Each of the engines available for the AMX AC Mle. 1946 offers a significant improvement on the previous version. The stock engine simply doesn’t cut it, but thankfully the middle Maybach HL 230 P 45F is already a good boost. The top engine allows you to reach maximum speed really quickly and maintain a very high speed while going uphill.

The suspension upgrade is not necessary for this vehicle. It is possible to mount the top configuration as well as all equipment without upgrading. However, the increased traverse speed provides a significant boost in performance.

The 400 metre signal range provided by the stock radio is far too low for a tier VII tank destroyer. This makes upgrading to the SCR 528F with its 750 metres signal range absolutely necessary.  It is really not possible to properly navigate on the battlefield without the decent signal range. As with many medium tanks, the mobility of this tank destroyer allows it to rush from one flank to the other without any problem, but without information about the enemy position you will not be very effective at all in supporting your team.

This vehicle has three guns available for it. Researching the 90 mm DCA 45 AC is absolutely necessary for increasing performance. The stock gun has a terrible penetration of only 135 mm, while the upgraded version boosts it to an outstanding 212 mm and 0.34 accuracy.  It loses a little on the RoF and aiming time but it is worth it. It is not necessary to research the 100 mm SA 47 AC gun on the way to the AMX AC Mle. 1948, but it is a great idea because the gun is yet another step in the right direction.  What’s more, it can also be used on the AMX AC Mle. 1948.

The AMX AC Mle. 1946 has a lot of equipment that may suit different play styles, but the most universal and easiest to use would be the combination of the Gun Laying Drive, Gun Rammer and Improved Ventilation. For many tank destroyers people like to choose the camouflage net, but for the 46’ it is not that useful – the rather high rate of fire causes you to constantly expose yourself after each shot.

The AMX AC Mle. 1946 is a true beast. It can be considered to be one of the best tank destroyers of its tier thanks to several advantages over similar vehicles. It’s time to try to put all the advantages into use.

Firstly, the 46’ has a really amazing frontal armour plate compared to other Tier VII TDs.  This means that you can put up a real fight against many different enemies, even those from higher tiers. Not only is the armour 120mm thick but it is also nicely angled. When properly angling the hull, the armour can prove to be very effective in combat. Be warned though that your viewports located on top of the hull are a huge weak spot. Another weak spot on the front is the driver’s viewport, but this one is very small and is located right next to the well-armoured gun mantle. It is unlikely that the enemy will be able to hit it when far away. To improve the efficiency of the frontal armour plate, it is a good idea to use the terrain shape to place the hull so that the angle at which the enemy is firing is even higher, making the shots bounce off more frequently. The gun depression of this vehicle is good enough to fire at enemies while angling the hull, so do not hesitate from doing that.

Be warned that although your frontal armour is very thick, your side armour as well as rear armour are almost non-existent and vertical.  This means that it can easily be pierced by any tank you meet on the battlefield in standard battles.  Always face the enemy frontally and watch out for fast enemy vehicles flanking you. It may prove to be hard to escape from an enemy who manages to get behind you and you will not be able to damage him unless you manage to face him frontally. 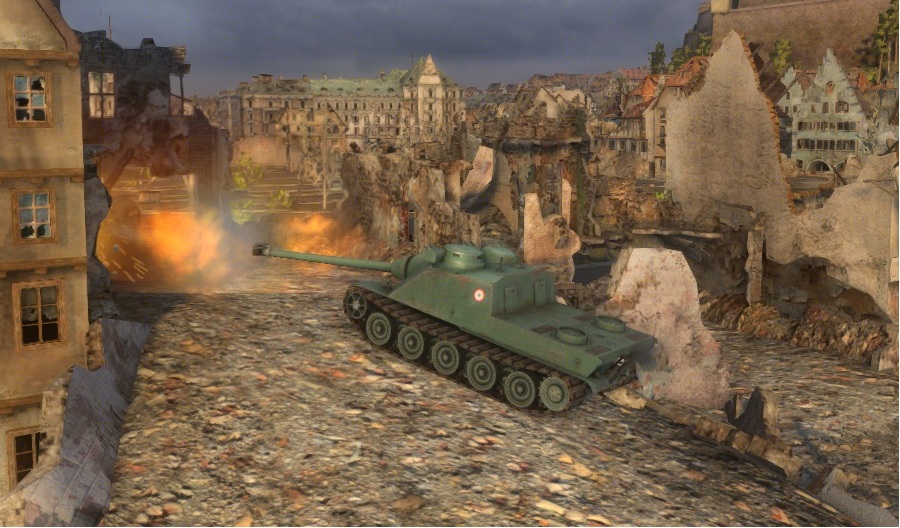 In case an enemy does manage to flank you or get behind you, there is a tactic that might help you out in some cases. Do not rotate your hull trying to catch the enemy making a mistake or slowing down, because an experienced player will not make that mistake – he will just carousel you until your tank is a pile of burning junk. What you can do in this kind of situation is to back up against a wall. This prevents the enemy from being able to perform a full circle around you. Sure, you will get damaged, but there is a chance you’ll be able to fire back and face the enemy frontally, once again limiting the amount of damage dealt to your vehicle.

Since the implementation of physics in Version 8.0 it is not as easy to block a tank destroyer just by standing right next to it. The AMX AC Mle. 1946 is not only heavy, it has a really powerful engine, so pushing medium and especially light tanks away that are blocking you should not be a problem.  In some cases, when there is no wall to back up against, you can try ramming a vehicle that is trying to flank you before he actually manages to get out of your shooting arc. Be warned though that ramming heavier enemies is a bad idea. For example – trying to ram an AMX 12t is a great idea, since it’s a very light tank with next to no armour.  This makes it easy to track it in a ramming attack as well as severely damage it, potentially damaging tracks or internal modules. A T32 on the other hand is not a good ramming target, since it’s a heavy tank. It is very likely that the ramming attempt would deal more damage to you than to it.

The AMX AC Mle. 1946 has two great guns at its disposal. Both the 90 mm DCA 45 AC and the 100 mm SA 47 AC are amazing for dealing great amounts of damage. The 100 mm gun has higher penetration and deals more damage, but at the cost of lower rate of fire and slightly longer aiming time. It is mostly for you to choose what you prefer, but most would probably go with the 100 mm because of the higher penetration.

The AMX AC Mle. 1946 is a great second line vehicle. Because of lack of a turret it is not well suited for being a first liner. The good accuracy, extreme penetration and not-too-high reloading speed make it perfect for aiding against enemies that have been spotted by more heavily armoured heavy tanks or scout tanks skirmishing behind enemy lines. Remember not to travel alone and use your speed to your advantage, you can easily outrun most heavy vehicles in game and quite a few of the medium tanks as well. Always mind your flanks and don’t rush. Remember that most of the time people rush a lot and have the tendency to ride right under your nose. Don’t be the one making that mistake.