Over the course of 28 days, an incredible 208,773 players embarked on the long, hard, but ultimately rewarding quest of Ranked Battles. After four challenging stages, we’re excited to celebrate the most successful players and highlight some of the greatest moments with a special infographic: 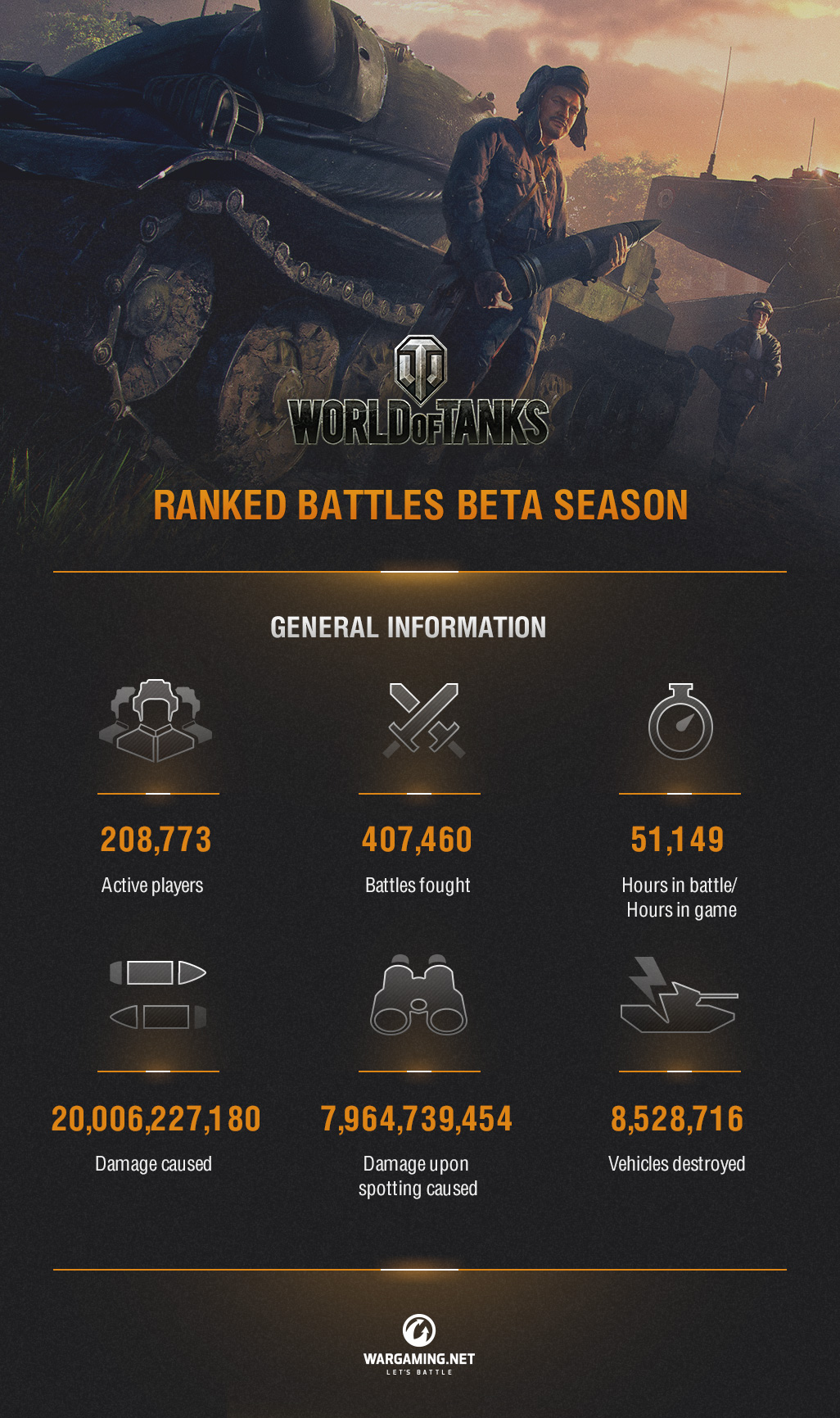 Pretty awesome, right? We think so, too. However, there’s an even more precious list that everyone’s come here to see, and we aren’t going to keep you waiting a second longer. Check the “Season Leaders” leaderboard in the game client for the final standings! The sheer talent of every player from the three prize leagues is astounding, and we’re happy to give them Bonds, exclusive badges, and crates full of goodies.

All these prizes will be credited to the winners' accounts by July, 9. Medals will be given out after the rewards.

Unfortunately, we detected a few instances of foul play during the season. Tankers who used prohibited third-party modifications and violated the Game and Event rules were excluded from the leaderboard and penalized. This didn't affect the final standing of those who played by the rules. All tankers that earned their rank unfairly also lost the Bonds they earned during the season's stages.

Thanks to all Beta Season participants for your enthusiasm, dedication, and substantial feedback. We know you’re curious as to how the mode will evolve after the beta, so we went ahead and outlined a rough list of areas for future improvements:

Vehicle types: The matchmaker ensured the difference in the number of arty, LTs and TDs within each part of the list was one vehicle at the most, but didn’t mirror the teams by the number of medium and heavy tanks. It often led to frustrating scenarios when you would end up with on a team full of heavies, facing a team with a majority of medium tanks. Of course, it left you with a larger HP pool, but the opposition had better chances at victory regardless, as they were faster and more maneuverable. This caused annoyance for a number of players, and we’ll ensure it doesn’t happen next season.

Map rotation: Our primary goal this Beta Season was testing the mode’s core functionality. The rank-based balance we introduced added an extra rule for the matchmaker: along with considering templates, the number of SPGs, and vehicle types of each side, it also aims to match you against players of comparable rank. Including map rotation into the equation would have resulted in longer waiting time, discouraging players and hampering the test. We turned it off for the Beta Season to collect substantial data, and are now working on bringing it back and minimizing its effect on queue time.

Progression: Ranks are here to symbolize a player’s mastery (they serve as a mark of personal excellence of sorts), and we’d like to stress it even further. We’re considering several variants here, ranging from tweaks to the number of chevrons between ranks and/or the number of ranks through to revising the overall season structure (the number of stages per season, their duration). Leveling to the highest Rank will require a lot of skill and more time, but the greater the effort, the sweeter the reward!

Along with overall enhancements to the mode, we’re evaluating the standalone new feature that was first tested during the Beta Season—Bonds—and the new rewards (Improved Equipment and Directives). We’re considering a few options here: limitations on Improved Equipment, expanding the list of items you can purchase with Bonds, making them available through other game modes, and more. Just as with other areas for improvement, we’ll keep you informed every step of the way.

It’ll take us some time to introduce and test these tweaks. We’ll announce the dates and details for the next season when we finalize the set of changes and label them ready for another iteration of testing. As always, keep your eyes glued to the website for more Ranked Battles news coming your way, and thanks again for joining us for the Beta Season!