As we head into the summer, we keep addressing our huge to-do list and bumping the most important topics to the top. Next in line is the preferential Premiums issue. The question has been up in the air for a while now, but before we jump headlong into it, here’s a historical note.

A little over a year ago, World of Tanks upgraded to version 9.18, introducing important enhancements to the game’s matchmaker. As opposed to its predecessor, the new version’s functionality was based on several templates that regulated pre-battle team formation. Since then, the tool has gone through several changes, until it reached a level of performance that met the expectations of both the community and the dev team.

So, now that the game has proper team distribution, mismatches are a rare case. Everyone’s happy, right? Not really. The new approach benefited everyone, apart from preferential Premium vehicles.

Why is it even a problem?

The coin has two sides. The first issue comes from the main feature of preferential Premiums—tier-range balance. Starting from mid tiers, all vehicles have the –2/+2 tier range. This means that if you’re rolling out in your King Tiger, you could find yourself on top of the list with clumsy Churchills or tiny AMX 12t’s. On the other hand, there are chances to land at the very bottom, facing mighty IS-4’s and fearsome T95s.

With preferential Tier VIII Prems, you won’t encounter an opponent higher than Tier IX, which should make life easier. But the new matchmaker struggles with these machines. It takes more time and computations for the tool to balance them properly, which extends queuing time. This is what happens next: the matchmaker starts grabbing an excessive number of Tier IX tanks to fill up team rosters for preferential Prems, so they become deficit when it comes to forming teams for Tier X machines. The matchmaker then looks for something to fill the gaps for Tier X’s, and look who’s here. Hello, Tier VIII’s! Come here, little fellas.

The second issue is preferential Prems’ combat specs. They always were lower than what the competition had—for the sake of balance. After 9.18 came out with the 3/5/7 distribution rule and its derivatives, preferential Prems would often fight against vehicles of the same tier or higher, which means they find themselves on uneven playing field. Imagine you’re commanding your KV-5 and in the vast majority of cases you’re somewhere in the middle, up against a full stack of IS-3’s, Ferdinands, Pershings, and other top Tier VIII folks. Add a couple of Tier IX’s to the equation, and your chances of surviving aren’t that pretty.

We’re now into fixing both these issues, and this is how we want to do it:

How come it took so long?

It’s the price you might pay for an error. There’s a lot of preferential tanks in battle as we speak, so we’ll have to process a multitude of options before settling on a happy medium.

The “global” direction would tweak the work of the balancer, so that preferential Premiums have higher chances of getting into the top 3 of the 3/5/7 list. Ideally, this solution would be beneficial for these machines, with no need for substantial edits to their specs. The reality, however, hit us in the face during several internal tests and simulations, which indicated minor improvements countered by an overall decline in matchmaking performance. It left us no other choice than to abandon this approach.

The “local” direction was to opt for an individual approach to every model, bringing the changes they need and thus reducing the overall negative impact made by preferential Premiums on the matchmaker. After a series of tests, this proved to be the go-to solution, but caused another problem. Some of the current preferential Prems are so “old” in terms of combat characteristics that simply dragging slider boxes with their specs won’t help. It turned out some vehicles require major revision, while we also want to maintain the same character they have now.

We don’t want to turn an assault tank into an ambush vehicle. We want to preserve or even emphasize their distinct features.

At the same time, we plan to give players the opportunity to decide whether an updated tank is relevant for them. Therefore, every tanker will be able to exchange a particular machine through the special trade-in option for an exclusive list of tanks not available in the common trade-in. The cost of this kind of exchange will not exceed 2000 Gold. Thus, each owner of a preferential Premium will have 2 options:

We mentioned the KV-5 for a reason, as it will be the very first tank to go through the overhaul. The reason we chose this vehicle is because it’s the ultimate experimental subject: a veteran preferential Premium tank that stands out thanks to its combat role and characteristics. It meets all our requirements better than any other on the list.

The updated version of the KV-5 will retain its main features, remaining a heavily armoured vehicle with a huge pool of hit points and the high rate of fire. We’re raising its penetration values to 218/243 mm (for the base and the Premium shell, accordingly) and would like to see how it behaves with 330 points of alpha damage. The latter is a questionable improvement, so we’ll be tracking stats and your feedback closely before making any solid decisions.

We’re also increasing its frontal armour: the loader’s turret will get 190 mm instead of 150 mm, while the radio operator’s turret will become 200 mm thick, in contrast with the current 180 mm, and the driver’s turret will go from 150 mm to 200 mm. The overall thickness of the main turret will reach 220 mm, turning the KV-5 into a full-scale heavy tank. 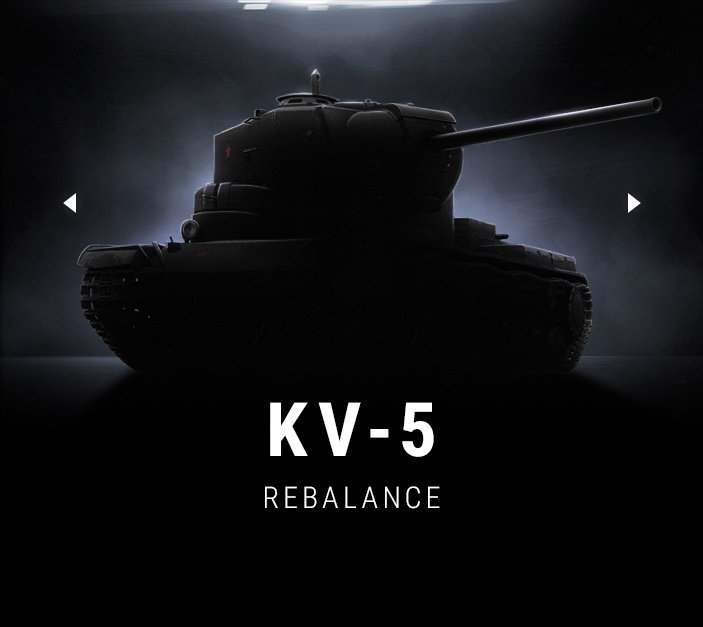 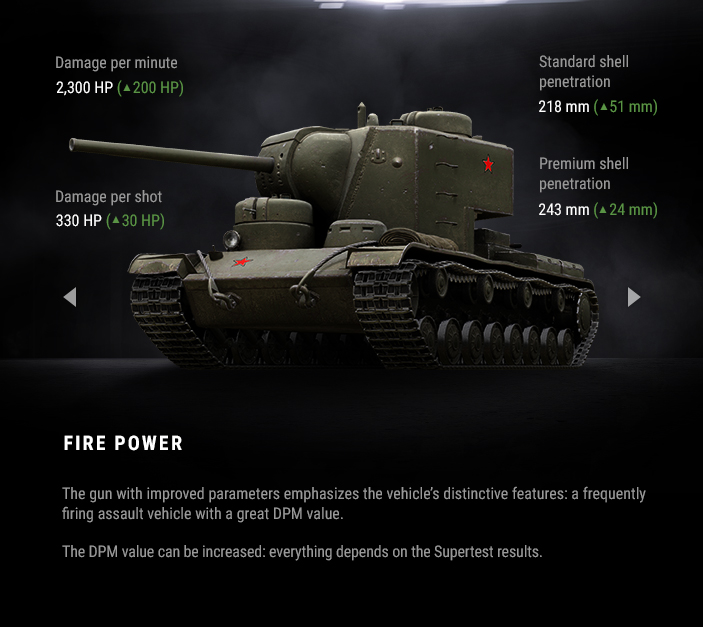 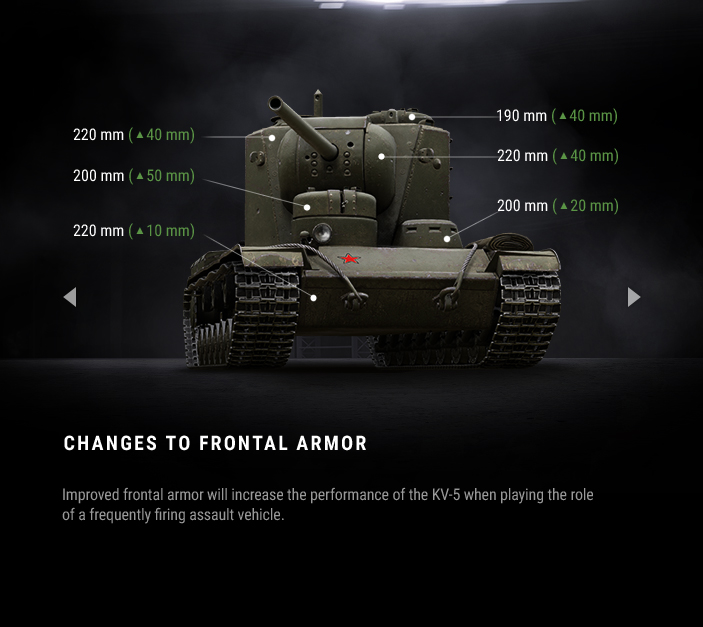 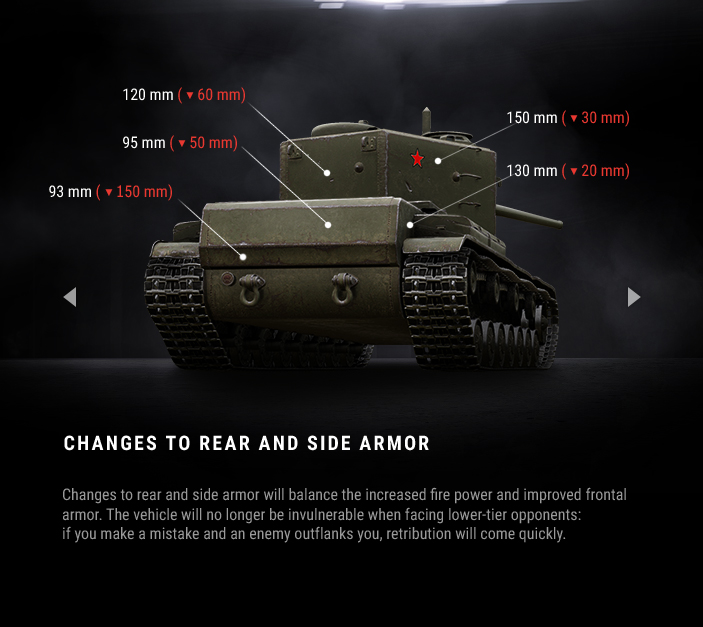 At the same time, we’ll have to pull down some of its current characteristics. For the KV-5, those will be the side and the rear armour—to avoid turning the vehicle into an invulnerable, destructive beast. We want the tank to become a frontline expert, a raging bull ready to tear down enemy defences or meet an assaulting opponent with a welcoming heavy counterpunch, yet be vulnerable to flanking or rear attacks.

We’ll start implementing these changes almost immediately. The first iteration of testing will kick off within the next week, and the final list of changes will greatly depend on how the updated KV-5 feels and delivers in battle.

Considering the above improvements, the KV-5 will become a competitive combat vehicle capable of withstanding any opponent effectively. Moreover, the overhauled vehicle will be able to oppose Tier X vehicles. The cost of these improvements is the standard range of battles, no preferential matchmaking that will no longer be needed with the new technical characteristics. New challenges and new opportunities for the U.S.S.R. giant.

The issue of preferential Premiums is key to us, so we plan to conduct numerous internal tests, trying various options for tuning these tanks. As always, your feedback is highly appreciated, so stay tuned and share your thoughts on the forums.