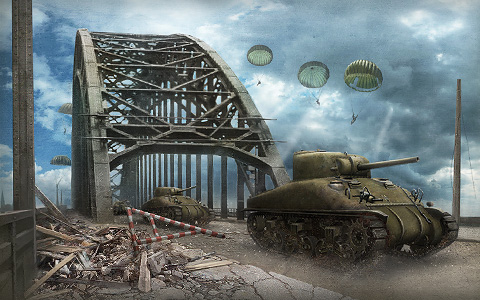 Operation Market Garden (17–25 September, 1944) was an Allied military operation, which was fought in the Netherlands and Germany during WWII. At that time it was considered to be the largest airborne operation.

The operation's aim was to seize the bridges across the Maas (Meuse River) and two arms of the Rhine (the Waal and the Lower Rhine) as well as several smaller canals and tributaries. Crossing the Lower Rhine would have allowed the Allies to outflank the Siegfried Line and encircle the Ruhr, Germany. It made large-scale use of airborne forces, whose objectives were to secure a series of bridges over the main rivers of the German-occupied Netherlands and allow a rapid advance by armored units into Northern Germany.

World of Tanks development team announces the approaching special dedicated to Operation Market Garden, which will be held for WoT players in a few days.

So follow the news and get ready for the special!