Get ready to test your battle mastery against your fellow commanders in a brand-new game mode with fresh mechanics!

From October 12 through November 20, you will have the opportunity to face players of equal rating and find out who’s the strongest. Battles in Onslaught will take place in the 7v7 format in Tier X vehicles only, and will take place during the Season of the Griffin. The mode features many new gameplay mechanics, and among the large number of rewards you will find unique progressive 2D styles that will highlight your achievements. Read on for more details!

The Update 1.18.1 Common Test is right around the corner, so don't miss your chance to be among the first to try out this thrilling mode!

Onslaught
Season of the Griffin

Onslaught: A New Mode to Test Your Skills

To make the new mode the perfect place for the best of the best to compete on an equal playing field, we're introducing many new gameplay mechanics. All of them are designed to further enhance Onslaught's competitiveness. Let’s take a look at them individually.

In the pre-battle lobby during the countdown before battle, you can change your selected vehicle. Be sure to prepare it for battle, though—it must be repaired and have a full crew and ammo loaded. You can also select an alternative set of equipment, shells, and consumables. You will also see your vehicle and your allies at the starting positions on the map.

All vehicles in Onslaught have special roles depending on their conduct on the battlefield. During the course of each battle, you earn Prestige Points according to your role and combat performance.

Depending on its role, each vehicle type features a special Role Skill with three levels of charge. All vehicles of the same combat role have the same skills. For example, assault heavy tanks have Field Repairs at their disposal, which, after activation, creates a zone that gradually restores the vehicle's and its teammates' HP within a certain radius. Assault medium tanks can use the Fury skill, which reduces reload time by a few seconds. There are many other Role Skills in the mode, so every vehicle will have the opportunity to better fulfill its purposes on the battlefield.

At the start of a battle, all Role Skills are unavailable. To activate a Role Skill, you need to have at least one level of charge. Perform your best in battles and earn Prestige Points to unlock and improve your Role Skill from level 1 to 3. The higher the charge level, the more powerful the effect of your Role Skill. Upon activation, you spend all accumulated charge. You can reuse your Role Skill after a cooldown.

Prestige Points also affect how many Rating Points you gain or lose, which are needed to advance through the mode's progression.

Maps and Points of Interest

Battles in Onslaught will unfold on the following select set of Random Battle maps: 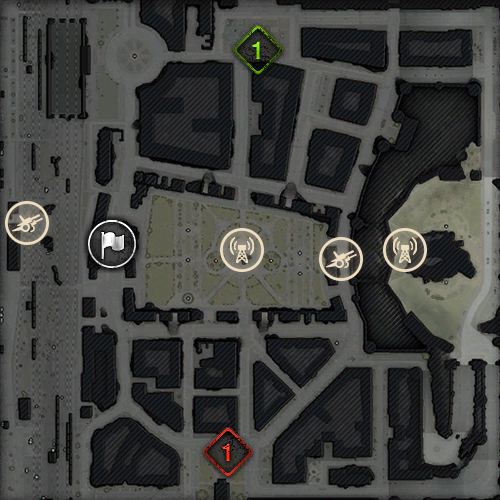 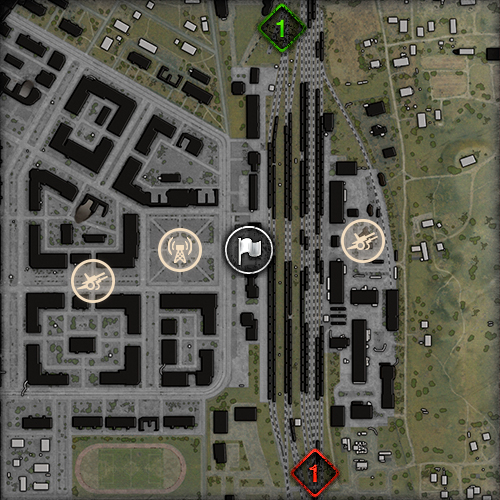 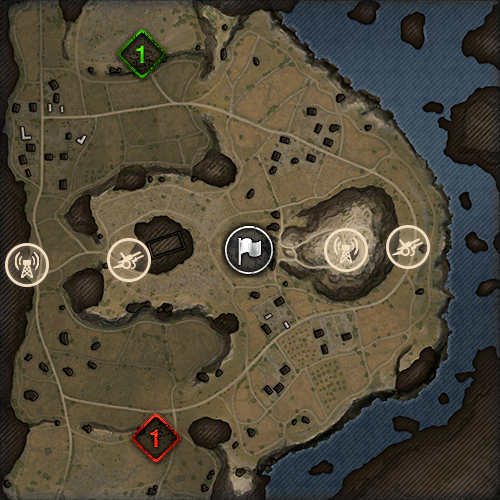 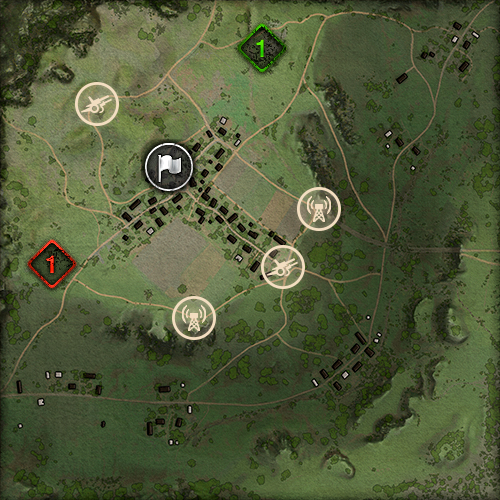 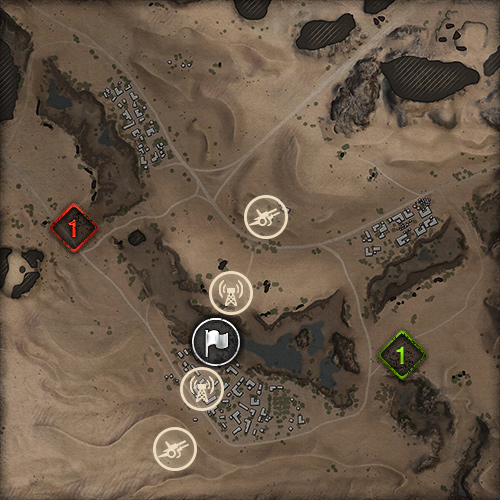 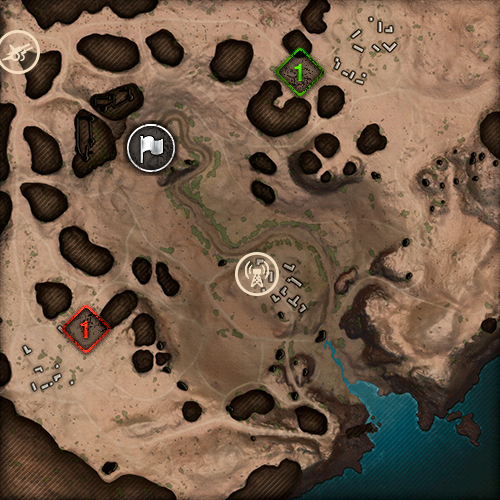 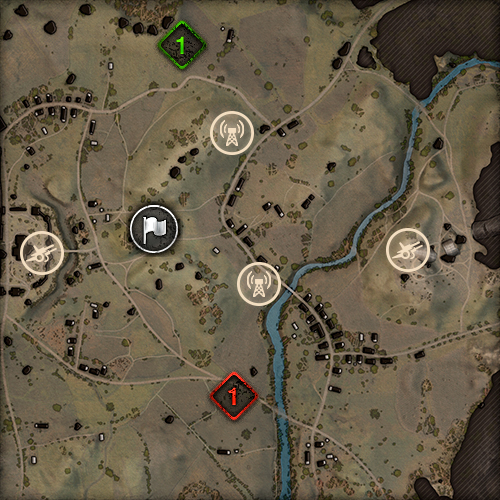 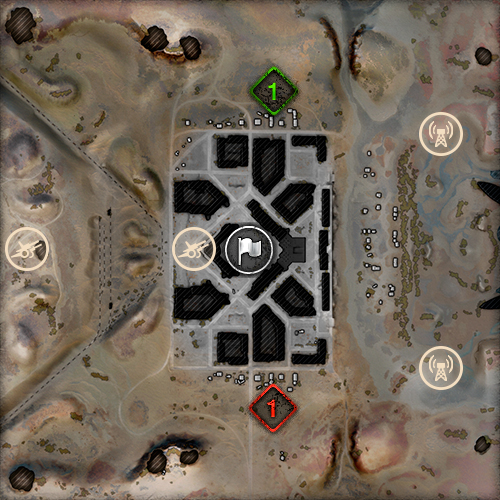 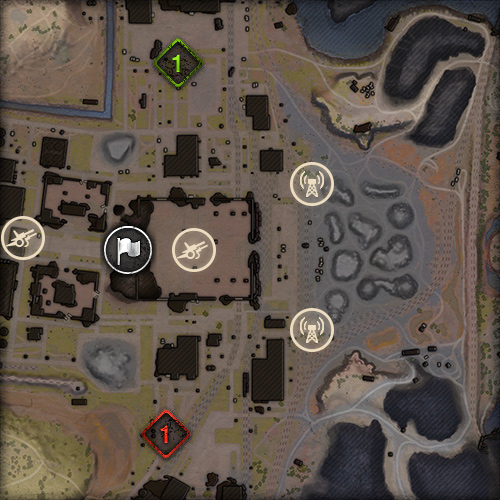 Some of these maps have been slightly reworked specifically for Onslaught to make the battles more engaging and competitive. We’ve added additional firing and cover positions, passes, etc.

Each map in Onslaught has special Points of Interest called Artillery Headquarters and Communication (Comms) Center. Having captured a Point of Interest, you'll be able to activate a unique Tactical Skill to gain an advantage over your opponents.

To make battles even more unpredictable, Onslaught features the Fog of War mechanic. At the beginning of a battle, teams won’t know the location and strength (i.e., vehicle types and models) of the enemy forces until they’re spotted.

Get Ready to Fight in Super Platoons!

Choose to fight solo or create a two-player Platoon with your friend. You can also join a Super Platoon of seven teammates of equal rating and fight against an opposing Super Platoon.

In Onslaught, you will be able to communicate with your teammates and coordinate your tactics via voice chat. This will be disabled by default, but you can enable it with one touch using the "H" key (default) or directly in the mode interface. All players who are in voice chat will be marked with a special icon.

The Platoon/Super Platoon voice chat turns into a team chat upon entering the pre-battle lobby.

If you have not turned off voice communication while in a Platoon, you will be automatically connected to the team chat at the start of the battle.

Throughout the Season of the Griffin, your experience and individual mastery will be your main advantages. In Onslaught, the matchmaker will take your position in the mode’s Ranked System into account and automatically find opponents close to your rating. It will assemble teams of equal strength based on their rating gained in Onslaught. As a result, players will clash with each other in intense battles, fighting on an equal playing field to discover who is best.

In Onslaught, the matchmaker evenly distributes players of different Ranks and Divisions. Players who differ by 7 Divisions cannot be matched in the same battle.

Set yourself apart from the crowd with the progression system with a rating that shows your performance and reflects the growth of your mastery. The higher it is, the greater your status—and reward!—will be.

You can also lose your earned Rating Points for defeats, draws, abandoning the battle before it ends, or long inactivity in the mode (more on that below).

In total, there are seven Ranks in the mode:

The first five Ranks comprise four Divisions—D, C, B, and A—while the two remaining top Ranks—Champion and Legend—have only one Division.

But the most prestigious and honorable is the Legend Rank. Only 10% of the most skilled and persistent Commanders who manage to enter the mode's Leaderboard will be able to reach this elite ranking.

The Debutant camouflage pattern for the "Wing and Claw" style

The Iron camouflage pattern for the "Wing and Claw" style

Bronze camouflage pattern for the "Wing and Claw" style

Silver camouflage pattern for the "Wing and Claw" style

Gold camouflage pattern for the "Wing and Claw" style

Champion camouflage pattern for the "Wing and Claw" style

25 bonds per day for holding a leaderboard position

Legend camouflage pattern for the "Wing and Claw" style

Legend of the Griffin nickname stripe

50 bonds per day for holding a leaderboard position

Onslaught will feature its own dynamic Leaderboard in the game client. It will only display players who have reached the two top Ranks, Champion and Legend. The player's position on the Leaderboard depends on the number of Rating Points they have earned. If several players have the same number of Rating Points, the player who has played more battles in Onslaught will take the higher position.

If you are not active in the mode for a certain period, the number of Rating Points you've earned will gradually decrease. This mechanic will only apply to Silver, Gold, Champion and Legend Rank players.

Now, to the most tantalizing topic: rewards! The Season of the Griffin brings two lines of rewards.

The first reward line includes unique status customization items that will spark envy in other commanders. To get your hands on these rewards, you need to advance through the progression.

1 "Exhibition Performance 3" emblem
Into the Cap Circle
Conditions:
Earn a total of 250/500/750 base capture/defense points in Onslaught
Reward:

1 "Into the Cap Circle 3" emblem
Tactical Advantage
Conditions:
Capture a total of 15/150/375 Points of Interest as a team in Onslaught (including captures by both the player and their teammates)
Reward:

1 "Till We Meet Again 3" emblem
Shoulder to Shoulder
Conditions:
Win 25 battles in a 2-player Platoon in Onslaught
Reward: 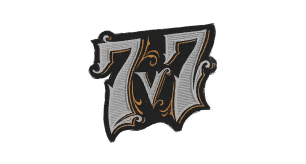 1 "Seek and Destroy" inscription
Prestige
Conditions:
Be the top player on your team by Prestige Points earned in Onslaught 50 times
Reward: 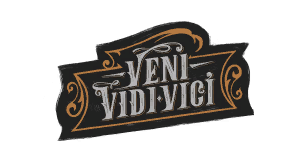 After you play your first battle in the mode, you will get a unique progressive 2D style that can be applied (and then re-applied, if you wish) to any Tier X vehicle. You will immediately receive Level I of this style. As you reach new Ranks or significant achievements in a specific battle or series of battles, your style will gain new 2D elements, such as emblems, inscriptions (after completing special missions available in Onslaught), and camos.

The maximum Level VII style with the most imposing camo is awarded when you make it to the Legend Rank. In total, you can earn up to five copies of the style during the Season of the Griffin.

Reaching new Ranks will also earn you extra exclusive customizations, including the following:

Plus, players in the Champion and Legend Ranks receive bonds daily as an extra reward.

The second reward line includes valuable in-game goodies (e.g., bonds, pieces of equipment, Personal Reserves, etc.) that you will earn for a certain number of victories in the mode. These treats will be distributed among eight stages. To complete each stage and grab your prizes, you need to win a certain number of battles.

Finally, after playing your first battle in Onslaught, you will be awarded these three 7v7 rental vehicles:

All rental vehicles are replicas of existing tanks with the same characteristics and properties. They will remain on your account until the end of the Season and will be removed when it’s over.

The Season of the Griffin is approaching fast—prepare your Tier X vehicles, and get ready to prove yourself in thrilling battles!