In order to lift the veil over World of Tanks design a bit, we have asked the developers some questions about one of the maps that appeared in 7.3 – the intriguing and exotic Dragon Ridge. As this map is relatively new and different from most of the other World of Tanks maps, let’s have a peek into the developer’s kitchen and see how this Chinese landscape came about.

What are the best sniping points and locations for artillery?

SK : There are no “best” spots. The map makes you think and move constantly.

GK : Of course, when a developer plans a map, he thinks of “good spots” for various types of vehicles. However in a real battle it could end up working out in a completely different way. One of the challenges encountered by players on a new map is searching for optimal tactics, sniper spots and vantage points through trial and error.

Are there any tactical tips for this map you can provide us?

SK: While driving a fast tank, you should go around the map to its western side and around the enemy positions.

SK: Most likely it will be possible, but the final decision has not been made yet. It is possible that the map will have to be slightly changed before the physics are implemented.

GK: Once new physics is released, you'll be able to push tanks off mountains, both on this map and on the other ones.

How should the heavy tanks play on this map?

SK : With heavies you should go directly to the village in the map center. The enemy is likely to meet you there.

How should the medium and light tanks play on this map?

SK : As is usual on most maps, light and medium tanks are supposed to drive around the main enemy force and flank it.

Can we expect more maps like this one in the future? That is maps offering flanking chances combined with high slopes, where engine power can be more influential than pure armor and guns?

SK : Since there are many maps coming in the future, it can be expected that these features will appear on some of them as well.

GK: In the future we plan to introduce a number of maps similar in style to those already in game, but also of new and considerably different maps like the Dragon Ridge. The development team works hard in both directions.

Are there any plans to restrict playing on this map for players by tier (like it is with the Province right now) or vehicle class (for example, no heavy tanks)?

SK: There are no such restrictions planned for this map.

GK: There is no tier limit for the Dragon Ridge, except for usual exclusion from Tier I and II beginner’s battles. Currently we see no reason to introduce a limit.

What was the inspiration for this map? Was there any particular place or movie?

SK: While this question is more aimed at map designers, we can say that various real-world references are usually used as inspiration.

GK: Sooner or later we'll add Asia to the Global Map. In order to make battles in its territory match the scenery, we've started production of several maps with landscapes suiting the region, and the Dragon's Ridge is one of them. For inspiration and some features we used pictures of southern provinces of China, close to the Vietnam border and neighboring areas.

What was the main idea behind the map, since in real life, tanks pretty much never fought in such terrain?

SK: The global map will spread to cover the entire world – so the map design will cover many different types of terrain.

GK: The main idea behind such maps is to give players the opportunity to battle with WWII vehicles in any place of the world, even in territories which would were never a theater of operations.

Afterwards, we proceeded to ask few questions to one of 3D Artists working on this map, Pavel Elago:

How many buildings for the map Dragon Ridge did you make on your own?

There are three buildings that I made for this map: a humble decrepit shed, a summer house lost on the hilltop and a pagoda standing proudly in the small Chinese village.

Which one did you find to be the most interesting?

Without any doubt the pagoda.

Why? Was something really strange about that?

This building is a brilliant representative of the Far East culture. When you look at it, you understand straight away that it is something glorious and religious. The pagoda is more than just a building, it is a mirror of the culture and traditions of Asian civilization, the mirror which reflects people’s history and traditions.

The structure of the building gives Chinese architects space to improvise and express themselves, to build square, hexagonal or even octagonal multistoried buildings. Pagoda structures were built almost 10 centuries ago and reaching 80 meters high.  They survived natural disasters, earthquakes, destructive wars. Even today, 80 meters is an impressive height, and pagodas reaching this height are not an unusual sight.

These extraordinary buildings are so unusual to us that when you look at them with your own eyes, you hardly believe that they are real. The architects managed to find appropriate locations for glorious constructions so that the scenery around them becomes a composite part of the architectural ensemble. 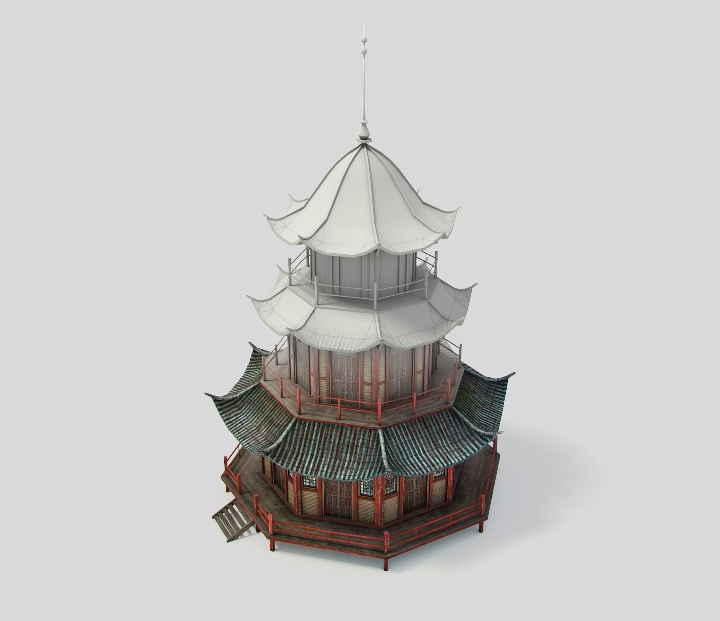 Can you tell us a bit more about the process of the building’s modeling?

This was one of the first tasks of its kind in the Chinese setting. Therefore, first of all I dug over lots of information and sources dealing with the subject and then took a look into Chinese history and found out how the first pagoda buildings appeared and what they stood for. This is a meaningful part of my job as each element and symbol means a lot for many countries and for Chinese culture in particular. I drew some respective conclusions in my findings and quickly got to work.

First I defined the exterior look and having made the sketch I started to make a 3D model. The peculiarity of this building is a roof with upturned edges, which tops each of the multiple floors. At the modeling stage I was already keeping in my mind which building materials were used during the construction: wood, stone, glazed tile.

When the model was ready, I started to cover the pagoda with textures. This is my favorite part of my job. When texturing, it is important to make a kind of history of the object, as only after this stage will the building be filled with meaning and life.

First of all you create a diffuse map, which shows the object in a way we see it, then you make a normal and specular map. Here we go – the pagoda is completed.

At the moment I am continuing to work on the Chinese setting. Very soon, the WoT game community will be able to see even more exotic buildings and constructions.

As a last part of this ‘map design insight’, you can review the various map design stages, from the basic rough draft to fully detailed map.

We hope you have enjoyed our excursion to South-East Asia and into the map designer’s workshop.

We will keep working to bring you more new maps from various corners of the Earth in the future and we hope they will be as challenging and as visually interesting as the Dragon Ridge!

The World of Tanks Team