Gamescom Recap of the Day

The second day of gamescom went by quickly and drew an even bigger crowd to the Cologne trade show grounds than the day before.

After the usual warm-up, two of our main World of Warplanes developers stormed the stage for a Q&A session where they discussed some of the game’s upcoming features. Want to know our plans for an open Beta or if you’ll be able to customize your plane visually? Or are you wondering if there’ll be mod support? Then come take a look at our report on our developers stage appearance (on the World of Warplanes website)! 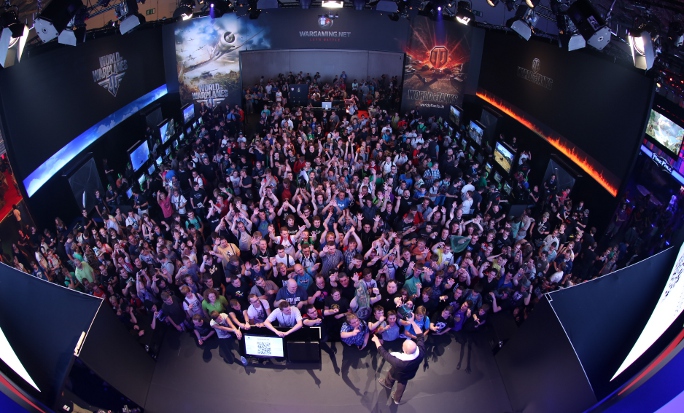 Next up we had a stage interview with the guys from Odem Mortis – one of the biggest German World of Tanks clans around. Fresh from their impressive performance at the national WCG finals, they took to the stage to answer the crowd’s questions in regards to their eSports history. Bump and Obirian were also at hand, to lead through the event and to make sure that we answered all the questions in the audience, as well as in the live stream where players could participate as well. Look for our review of this great appearance further down the line in our gamescom coverage.

In between shows our players had the tough choice of either playing some games online to score some of that much sought after goodie bags, or to be entertained by our exciting dancing crew. Word had quickly spread after their first appearances on Thursday, and so this part of our intermission program soon developed into one of the hottest shows of the entire trade fair, with people coming from all around to see it. If you can’t make it to gamescom yourself to check it out, make sure you tune in through our live stream, not to miss this great show.

In the evening we had our Live Creation of a Plane-event, where some of our leading designers and graphical artists working on World of Warplanes rendered themselves available for the crowd’s questions. Apart from answering about their usual field of expertise, some of our developers also got carried away a little on stage, and revealed some top secret information that you’ve got to know about! Would you like to know more? Then keep checking back to the news section so you don’t miss the moment when we’ll put our transcript of this Q&A session online!

After that it was guessing time! Our second installment of the Live Guess What contest took to the stage and quickly conquered the hearts of our fans participating at the event. Here are yesterday’s vehicles for all of those amongst you who missed it: Focke-Wulf Fw 57 V-3, Goodgear F2G-1 Super Corsair, GW - Typ E, KV2, Löwe.

Come and join the show!  Find us in person at our gamescom booth or follow the live stream and join in the online chat..