Odem Mortis (OM) are an eSports power house and a clan to be reckoned with when it comes to World of Tanks. Freshly crowned winners at the national WCG qualifier finals, they took to the stage recently at our Wargaming booth, to answer some questions from our gamescom audience.

First congratulations on your most recent victory here at gamescom. Now in your opinion, what does it take to enter a successful eSports clan?

Well, firstly you need to have the will to train and work hard, even if you fail over and over again in the beginning. Victories don’t come easily and the competition out there is very hard. So you need to be tough and willing to dedicate yourself to the game if you want to even be considered for membership in a competitive minded clan. Once you’re in the real work starts. Training needs to be taken seriously and you will need to show progress. Whoever isn’t willing to work on their game, already lowers their own chances for eSports success.

How do you guys prefer to train? Rather in tank platoons or companies?

Usually we play company battles when we’re just looking to have a little bit of fun in the game. It’s rather in Platoons that you coordinate and really train, because it allows you to analyze your platoon members’ game style and draw conclusions. Platoons are a good way to see how your team reacts under pressure, and sometimes nothing can be harder to overcome than the randomness of your enemy’s behavior in a standard battle.

What do your families think about how you spend your time? Do they consider it an honorable occupation?

That’s a tricky question! I suppose it depends on the family and obviously on the player himself. Depending on the situation (during hard preparation times for example) it’s true that you may be more or sometimes less available for your family members. We’re all responsible though and try not to overdo it, so that we still can take care of all of our tasks – be it at home or in the job.

What tanks do you guys drive? Only German ones? Or also some from the USA?

That usually depends on the map that we’re playing. Amongst our team members I’d say that American or German Heavies and French Scouts are the favourites.

Do you guys play only World of Tanks?

Yeah, mostly only World of Tanks and World of Warplanes. You have to dedicate yourself and concentrate on only one game if you want to reach professional level. If you get distracted by other games all the time, you’ll play all games on an average level – but none really well. 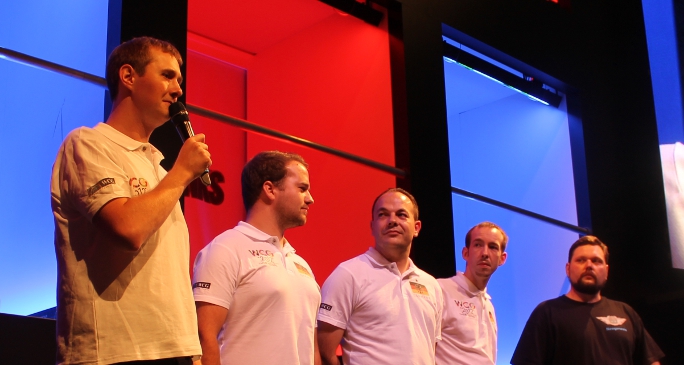 How much time do you spend playing per day?

That usually varies from person to person. Everybody has different skill sets, different training approaches and progresses at their own pace. Me for example (that’s Abusemeh talking) I have around 15 000 battles. But don’t think that I’m playing all day long to get them. I’ve just been playing for a long time. If I had to put a number on it, I’d say we all play around 1-2 hours per day.

How often do you guys train together per week to be at your level?

That depends on what we’re specifically preparing for. So mostly it’s really event-related. It can be everything from once a week to six days a week. As I said, depending on the situation.

Few. Some of us used to play a lot of Battlefield 2 before. Others have played Counterstrike on a professional level. But as we said before you have to get your priorities straight if you want to be able to be the best at something. We dedicated ourselves to World of Tanks some time ago and we don’t regret it.

What do you consider your biggest successes as a clan?

Well we won all the Wargaming tournaments this year. So we’re looking forward to our EU All Star medal. Apart from that our most recent victory in the qualifiers for the WCG definitely made us happy. The fact that we can play on the German national team fills us with pride!

That’s it Commanders. If you like to learn more about eSports keep a close eye on the news or come to gamescom on Saturday, where there’ll be another eSports Q&A on stage!