Unfortunately, many tankers know that unpleasant feeling when their team loses due to one teammate leaving their tank for some reason, or those cases where the final opponent self-destructs, leaving you without that coveted “Top Gun” or “Ace Tanker” badge. Player complaints about these kinds of event are absolutely legitimate: such situations can ruin the gameplay.

With Update 9.3 a new feature to increase fair play and promote mutual respect will be introduced in-game.

We are not talking about punishing accidental or unplanned disconnects or cases where urgent personal reasons cause a player to go AFK (away from keyboard) but unfortunately some players regularly abuse the trust that comes with playing World of Tanks.

The World of Tanks developer team pays close attention to unsportsmanlike behaviour and constantly works towards improving the system for evaluating and dealing with it. In this article we will cover the mechanics of our new system that will be introduced with Update 9.3.

Please note – preview screenshots are in English only as they are still in development. Localised versions will be added in-game when the new feature is implemented.

A player is considered a “Leaver” if he/she quits back to the Garage before the destruction of his/her vehicle.

In Version 9.3 a system will be introduced to track players who are regular “Leavers”. Upon pressing the “Back to Garage” button, a warning window will appear explaining all the negative consequences of this action to the player. 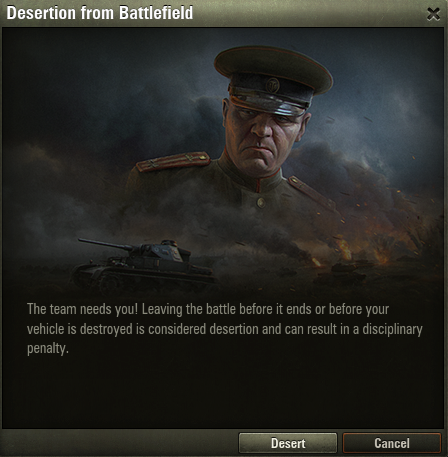 If the warning is not heeded, then, after a certain number of violations, the player will be fined an amount equal to the income of the battle that was abandoned.  This means no experience, credits, bonuses for missions, medals or marks of excellence. If the player takes part in and leaves skirmishes, no Industrial Resource will be gained either.

Once this point has been reached, every subsequent violation of this rule will result in a fine, although fully completed battles will of course be paid in full, provided the player’s conduct was fair.

This system will be adapted to suit newcomers. New players with less than a set minimum number of battles on their account will not be penalised for leaving a battle early, however the warning message will be displayed nonetheless.

A player is considered AFK (Away From Keyboard) if he/she is found to have done nothing at all during the battle.

In order to prevent irresponsible players from inactively participating in battles and obtaining an unfair reward, we have developed an AFK prevention system. If the system detects a player as inactive, the player will receive a warning. In cases of repeat inactive battles, the fine is the same as detailed above for leaving a battle early.

Single disconnects will not lead to penalties - the system will only warn the player. For newcomers with less than a set minimum number of battles on their account, a more favourable set of conditions will be enabled.

In conclusion, Update 9.3 will introduce a new system for controlling unsportsmanlike behavior, focusing on:

Single violations will not lead to penalties - the system will only warn the player. For newcomers with less than a set minimum number of battles on their account, a more favourable set of conditions will apply. If an account is fined for repeated violations, then from the next battle onwards the player can once again obtain the benefits of fair play if they complete a battle without violating a rule. However, the player will retain the status “under suspicion” for a certain period. Nickname colour changes will not be visible to other players and will be removed after a period of active play without violations.

Please bear in mind: the main purpose of this system is not to simply impose fines but to reduce unsportsmanlike behaviour.

To know more about how this new system works in practice you can take part in our Public Test.

As part of our commitment to ensuring fair play and making the World of Tanks experience as exciting and fun as possible, on 29 August pproximately 1,000 accounts on the EU server were given a 2 week suspension and final warning for using bots to farm experience and credits. Such behaviour is unfair and goes against the spirit of camaraderie that a team game should promote. It should be noted that cases of continued botting after the final warning and suspension will result in a permanent ban.