With the KV-122 back on sale this week, we thought that exploring the backstory of this iconic vehicle was timely! Here comes the story of the KV-1S, and how it gave birth to many great tanks. So, without further ado, let’s jump right into the past!

Once upon a time, there was only the KV-1S and the KV-3. Both were great Tier VI tanks, but only one brother was attracting all the attention of the kingdom. And rightfully so - kind of. Overall, the KV-3 was a proper beast boasting a hell of a gun, protected by a tough armour, while the KV-1S was left with its mobility only. A rewarding advantage on the field, but not big enough to overshadow its big brother. 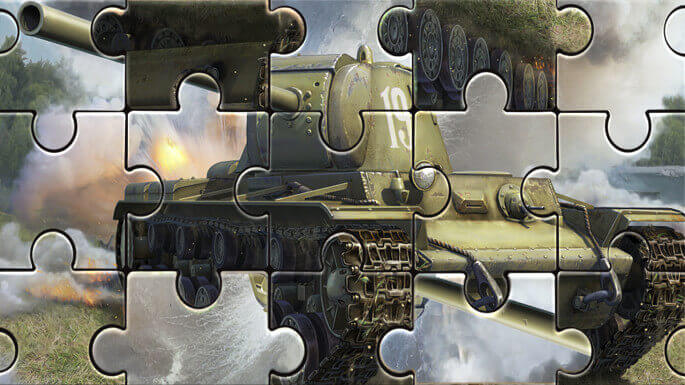 Let's solve this puzzle together!

But something happened. Too powerful for its peers, the KV-3 finally met its match when the tank joined the Tier VII family. There, the vehicle was still competitive, but the main effect of this change was the rise of the KV-1S on everybody's mind. Finally, the lesser brother got its revenge - and what a revenge. Still placed at Tier VI, the KV-1S received its due by combining high damage with high speed, a devastating combo! Back in the day, almost anyone could perform well aboard its vehicle, and only a few tanks could dream of taking this monster out - none of them was a heavy tank.

But just like any empire, the one built by the KV-1S rose, and then fell. The power of this vehicle was divided between two amazing knights, with different fight styles: The KV-85 and the new KV-1S. The latter is now placed at Tier V, where it plays like a KV-1, with a focus on mobility rather than survivability. At Tier VI, we’re now having the KV-85, closer to the glorious days of the KV-1S, but with more balanced guns. Whether you like the big booms from a 122 mm gun or the DPM of a 100 mm gun, this tank will always remain reliable.

Which leads us to the end of this tale: The introduction of the KV-122, which completes the legacy of the KV-1 up to Tier VII, where it can make good use of its surprising mobility and amazing 122 mm gun. It rings a bell, doesn’t it? Well, the KV-122 is oddly close to the old KV-1S, which makes it a real threat for lower Tier opponents, and a challenging adversary for everyone else. Trust this one, and go add it to your garage!