We've got this year's final update locked and loaded! So mark your calendars for December 13 and join us as we revisit and explain what's coming. World of Tanks celebrates the end of 2017 with the customization system makeover, an all-new line of French heavy tanks, and a mix of community-requested goodness, including balance changes to British TDs and the second Grand Battles map. There's a lot to take in here. So let's get right to it!

Current Premium players will be credited an additional 24 hours of Premium account time to make up for the maintenance period. If you'd like to make any in-game purchases, please wait until the servers are up and running again.

Click/tap the images below to see deeper details on each feature. 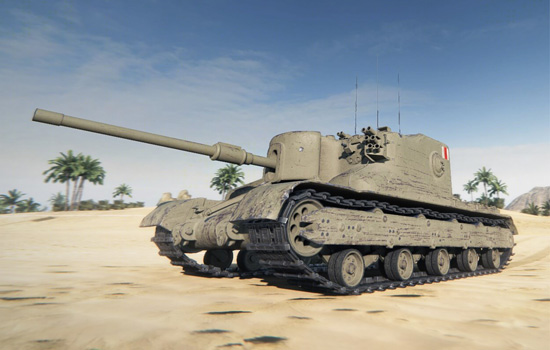 British turretless TDs were often overlooked because of their insufficient protection. Update 9.21 helps them reclaim a spot among conventional assault guns by doing away with massive weak spots in front and side armor. Along with addressing long-standing armor issues, the update gives the Churchill Gun Carrier, AT 15, and Tortoise greater pen stats and alpha strike with a 32-pounder gun. These balance changes should reinforce their strength as support vehicles that can eat up a few shells and dismantle opposition with an immense fire rate. 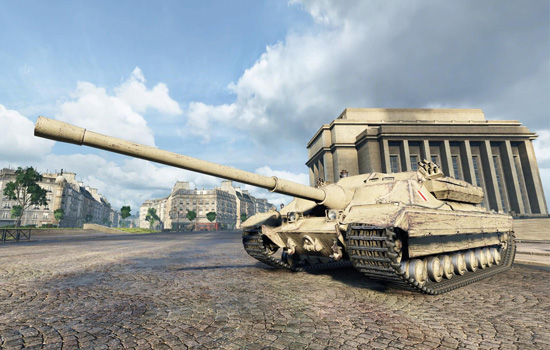 The FV215b (183) didn't fit into the close-range assault role that became the line's trademark after the revision. To ensure British turretless TDs offer distinct gameplay all the way to the top, we replaced it with the FV217 Badger. This newcomer builds on the skills developed from the line's Tier V–IX vehicles, but is way ahead of them in terms of firepower and protection, offering a rewarding Tier X experience.
If you own the FV215b (183) when the update releases, you're keeping it (as a special vehicle) and are getting the Badger for free! 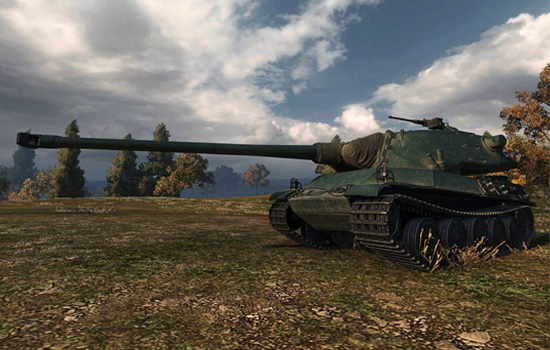 The AMX M4 mle. 45 now leads to a new line of French heavy tanks. Each newcomer has two top guns (one with hard-hitting alpha, the other with faster firing lower alpha), offering a pleasant change from the hit-and-run gameplay French HTs often force on you. But that's not all – the trio stands out more thanks to tough frontal and turret armor. Combine it with decent gun depression and a solid HP pool, and you have it in you to stay alive in the heat of the battle, while also contributing to the team's efforts. 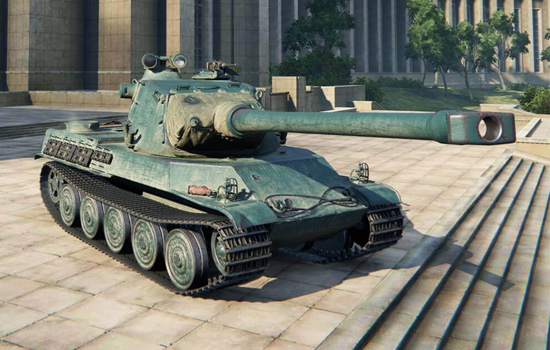 Make your way up the new French heavy tank line to discover the AMX M4 mle. 54. It continues the line's legacy of thick front armor and offers two guns that are completely different in terms of gameplay. The fast-firing 120 mm gun will turn you into a front-line brawler. Enjoy going shot-for-shot at close range? Stick to the hard-hitting 130 mm gun. Choose whichever gun suits your purposes best, and don't hesitate to try out the other option, once you've had your share of battles with the first one. If you know every bush on Nebelburg and have been vocal about new maps for Grand Battles, Update 9.21 addresses this with the 1.4×1.4 km Klondike. This new arena was created specifically for Grand Battles, and supports both Standard and Encounter formats. Inspired by tales of the Alaskan Gold Rush, it brings tank battles to North America where a packed mining town borders open fields and an abandoned miner settlement. Mixed terrain with vast tactical opportunities for each vehicle class ensures your experience will be anything but dull. Check out the detailed overview to hit the ground running! Throughout 2018, we'll be reshaping customization as you know it into a more sophisticated system that will let you give tanks your own sense of style. Update 9.21 lays the groundwork by adding style sets and mapping out a set of customizable areas on a tank. Now you can paint the hull, turret, gun, suspension, and gun mantlet separately, adjust camo sizes, and give your vehicle a distinct look with visual effects. Check out the guide to learn these new options.

The customization revision touches upon its core mechanics and wouldn't be complete without changes to price setting. To ensure the reshaped system runs like clockwork, we designed a uniform pricing model that meshes with the new mechanics. Since it's the first time we're showing it off, we put together a special FAQ to get you fully up to speed. Check it out and feel free to share any lingering questions on the forum.

Are these new mechanics available for all tanks?

Currently, new effects, paint, and purchasable styles are only available for Tier VIII Premium and Tier X regular vehicles. We're working on bringing them to lower tiers. Camos, emblems, inscriptions, and a rental style can be applied to all tanks.

Will you introduce new customization mechanics for other tiers?

Yes, we'll work on bringing them to tiers VI–IX during 2018.

What type of customization will be available for Tiers I–IX?

What about items I've purchased so far?

All permanent camo, emblems, and inscriptions you purchased before 9.21 stay with you when the update drops. You spent money on them and they're rightfully yours. Temporary camo will be withdrawn, but you'll have their costs reimbursed. You will be reimbursed the current cost of the camo in Credits, multiplied by the number of remaining days.

What about the items I'm using now?

They remain right where they were. Nothing gets demounted or withdrawn from your Account. The only exception is temporary camo. These get withdrawn, but you'll have their costs reimbursed. You will be reimbursed the current cost of the camo in Credits, multiplied by the number of remaining days.

I rented a camo before Update 9.21. What happens to it?

It gets demounted, but you will be reimbursed the current cost of the camo in Credits, multiplied by the number of remaining days.

Will prices change when 9.21 drops?

Yes, we'll be reducing prices for camouflage, emblems, and inscriptions, tailoring them to the new customization mechanics. For example, since it takes three skins to get a vehicle fully covered for one season now, each skin costs 50 Gold, which is about three times less than camo before 9.21. Check the game client for the full list of relevant prices.

Will you reimburse the difference in prices before/after 9.21?

No, we won't. Reimbursement creates exploitable loopholes. Nothing would stop people from stocking up on items now to get free Gold as compensation, which would have a negative effect on the game economy.

To minimize any inconvenience the revision might bring, we'll be giving everyone an exclusive nine-item set of camouflages when the feature releases. It consists of three season sets with skins for the hull, turret, and gun in each. Unlike other, nation-specific camos, these special textures can be applied to absolutely any tank.

Where can I check the new prices?

Right in the game client.

Can I customize the likes of the Defender and Patriot?

No, customization remains unavailable for these tanks.

How does camo work? Is it one item?

Camo is now applied separately to a vehicle's hull, turret, and gun.

A camouflage set for one season consists of three skins. You can customize your tank using skins from different sets. Also, you can adjust the camo sizes for hull, turret, and gun choosing from small, normal, and large.

What about the camo bonus?

It works just the way it did before 9.21. Simply apply a camo to the hull to decrease the enemy's view range around your tank.

Do I need to get a tank fully covered with camo to get the disguise bonus?

No, covering a tank's hull is enough.

How many camo skins do I need for a turretless tank?

Two: one for the hull and another for the gun.

What is the difference between historically accurate and non-historical paint?

Having bought a can of non-historical paint, you can apply it for any season (one can per module). Historical paint is a whole other thing. With it, you need to buy paint separately for each season.

I purchased and applied a visual effect, but nothing happened. What's wrong?

Check your graphic settings. Visual effects aren't visible if these are set at Low. If that's the case, you'll see a notification suggesting that you change settings. Change them and check it's visible now.

How often are you going to add new styles?

It depends on many factors, but we have plans to produce many styles during next year.

Can I somehow modify monotone camouflages?

Yes, you can adjust the scale of spots in camouflage. Also, tweaking the base color changes how the camouflage looks.

Can I create my style, save it, and apply to other tanks?

There's no such option at the moment, but we'll consider adding it in the future.

Can I edit the purchased style?

No, there's no such option at the moment.

I want to apply the same emblem for all seasons. Do I get charged for one item?

No, emblems are priced per item. If you buy one item, you can only apply it once. So, you need three of them for three seasons.

Will I be able to zoom in on a customization element?

Can I use a style I purchased with Gold for all tiers like the rental style?

No, it's available only for Tier VIII Premium tanks and all Tier X vehicles.

What's the difference between camouflage and a rental style?

Rental style gets you full camouflage for all seasons.

Can I sell the remaining battles in my rental style or sell part of the style?

I applied a customization, but my friends don't see it?

The checkbox Hide non-historic elements is checked by default. Tell your friends to un-check it in the settings (General tab) to make your design visible for them.

Hide non-historic elements is checked, but my customization items are historically accurate. Why are they not visible?

Most likely, at least one item you applied is not historical, which is enough to make all of them invisible. Please double-check and replace the non-historical item with an alternative to make your design visible for everyone.

How do I know whether customization elements are historically accurate or not?

Check the item description. There's a special icon and extra information on each item there.

What will happen if I remove paint from a tank?

When you remove paint, it gets moved to Depot. 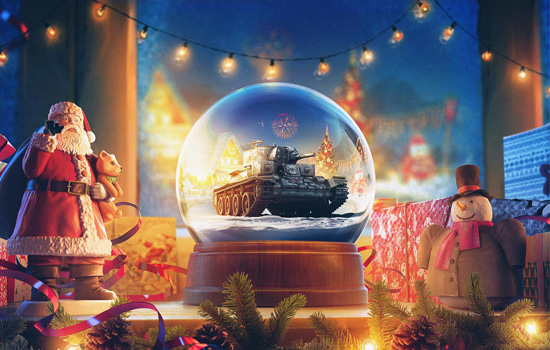 If you're looking for some holiday-themed content, World of Tanks will be offering a ton of ways to spend time over the next few weeks! Mark your calendars and join us in-game for a fun-filled Holiday Ops 2018 event, running from Dec. 15 until Jan. 15. This year, we're kicking holiday festivities up a notch with a grand Garage makeover, four sets of decorations, weekly missions, and a jolly collection of bonuses and rewards.

We hope you enjoy the changes in 9.21. As always, please stop by the forum to let us know about your experiences, and join us for the holiday season!

Improved display of the team list panel in Grand Battles

Changes to the Strongholds

Fixed display of badges in battle

Now, the badges are displayed in all types of team list panels, including:

Introduced terrain-related changes to hard-to-reach areas on the following maps:

Reworked a number of vehicles to HD quality

Vehicles that have been remodelled in HD: