Update 9.20 gives the AMX 50 Foch (155) a special vehicle status with all its benefits, opening the spot at Tier X, which the AMX 50 Foch B is warming up to fill it right away. Effectively a revised version of a once formidable old-timer, this new top-tier French TD sports thicker side armor and packs a six-round 120 mm autoloader with 400 alpha damage. If this has you excited, then read on for a review of the new French TD and the reasons behind the top-tier reshuffle.

Why are we doing it?

The AMX 50 Foch (155) lost much of its former glory as the game evolved. Balance tweaks to mobility, armor, and alpha pretty much forced it into exile, undermining the relevance of climbing all the way up the French TD line and earning this once-beloved French power horse a ghost-like status. The sad state of things sparkled a discussion in the community, putting us to work. To address the issue, we went through the line, tweaking upper-mid-to-top tiers and making autoloaders their signature feature.

Although it retained a few devoted fans, the AMX 50 Foch (155) couldn’t provide a Tier X experience, which would feel like a natural progression from Tier IX. So we replaced it with a TD well-suited for the job while keeping it in the roster for those who grew to enjoy it. We also decided to give some much-needed love to the AMX 50 Foch (155) by improving its side armor, gun depression (from -5° to -6°) and elevation (from +12° to +18°), as well as horizontal traverse angles (from 6° to 10°).

How will it work?

Take a minute to check your vehicle collection as the sleek new AMX 50 Foch B might be yours for the taking, no grind required. It’s as simple as it gets:

The 155 keeps its battle statistics, XP, achievements, medals, and Marks of Excellence, while its Crew gets retrained for the AMX 50 Foch B. The latter also inherits all of its customization items for their remaining duration. Lastly, the 155’s equipment gets de-mounted and moved to Storage, and you can use it on any other vehicle. 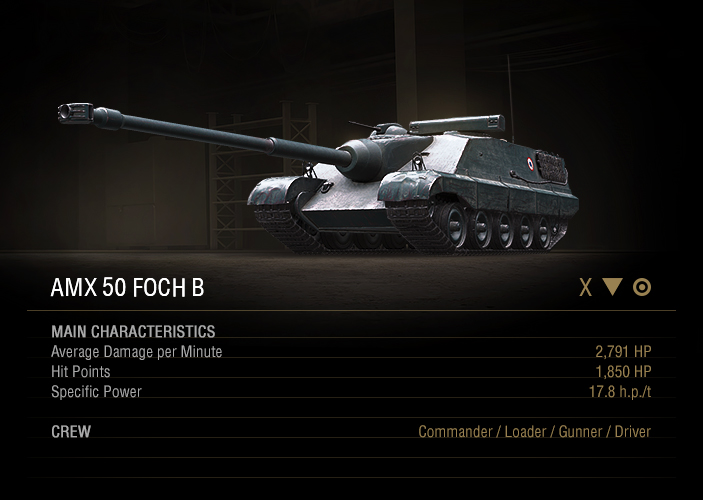 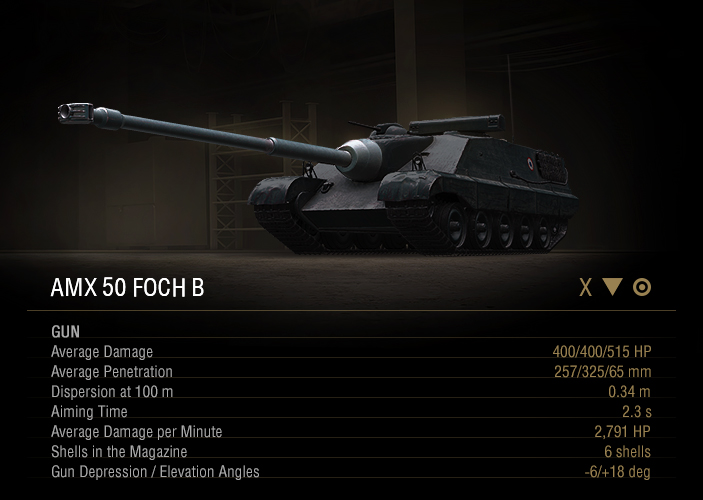 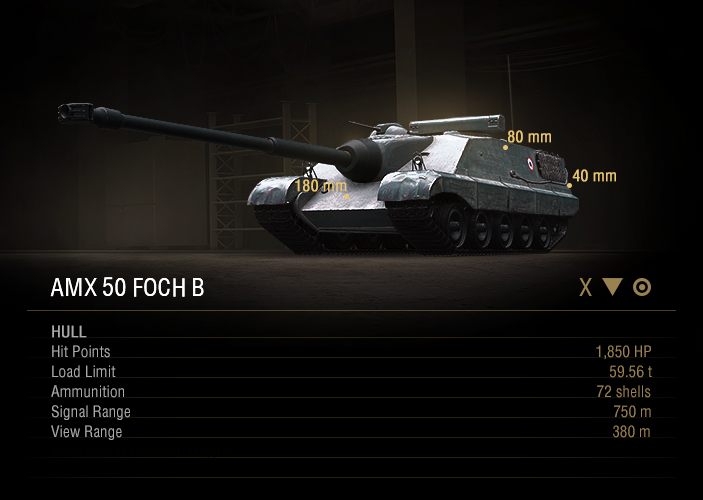 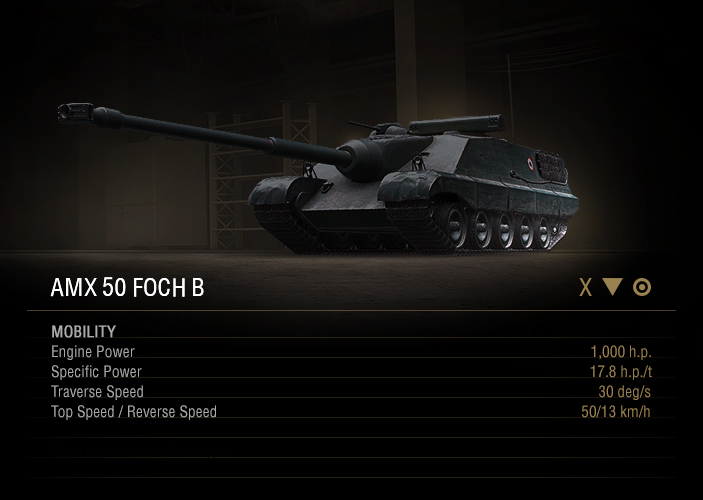 Firepower: When used wisely, the Foch B can deal enough damage to change the tide of battle. Its 400 alpha damage and 257 mm penetration might seem unimpressive for a Tier X gun, but once you’ve it filled up and ready to go, good things happen. In just 10 seconds, its six-round autoloader can unleash an astounding 2,400 damage with a 2s interclip reload. Of course, 257 mm of penetration isn’t enough to cripple a target simply by shooting at its silhouette. This “Frenchman” requires patience, not hasty moves and relying on luck. Spend a few seconds to take full aim at a weak spot—with practice and experience, you can bring the Foch B to bear, leveraging handy aiming parameters and traverse angles.

Armor: The Foch B inherits the armor layout from the AMX 50 Foch (155). Though most enemies will struggle to slice through the thick frontal armor, bear in mind a major weak point in the rangefinder—Tier X opponents can penetrate it easily if they take good aim. There’s a silver lining, though: the side plates that were virtually useless on the AMX 50 Foch (155) received a solid boost. Unlike its elder brother that is easily dismantled by any 120+ mm caliber gun regardless of firing angle, the Foch B’s 80 mm protection lets it smile at the three-caliber rule, using its horizontal gun traverse angles. It can become a game-changer if you play your cards right.

Mobility: Let’s be honest; the Foch B won’t make it into the game’s fastest list, but does it need superb speed to reign over the battlefield? Let’s take a look. It’s mobile enough to secure a favorable position and safely unload its devastating clip, or close on an enemy and send it back to the Garage. Unloading a clip into an opponent works every time with its firepower parameters, while its mobility lets you do that on your own terms.

The AMX 50 Foch B truly shines when you focus on damage dealing and frags. You can rock out in it supporting the team from the second or first line of fire. Sneaking up on an enemy where they least expect it will work just fine, too, making you a valuable asset for allied heavies and a devastating force for enemies. Try it for yourself and share your thoughts on the forum! But before you do, here are some tips to help you hit the ground running: