You may have heard about some of the details of Update 9.16. Today, we will be taking a closer look at the improvements to the game interface and will be revealing the planned changes to the Battle Chat.

Game client modifications are a wide-spread tool that allows players to adjust the standard game interface the way they prefer. The development team monitors the modifications that are popular among players and adds the best of them to the game. We consider several criteria when selecting which of the modifications should be added, such as the popularity of the particular modification as well as its gameplay utility. The introduction of popular external modifications allows us to improve the game interface while making it more convenient for players.

In-battle information has a crucial effect upon the battle's outcome. The more information that a player can consider while in battle, the higher their chances of victory. This allows players to select the most appropriate course of action to stay one step ahead of the enemy team. Players receive most of their information from the images on the screen: the distribution of vehicles on the map, any nearby combat, the minimap, etc. In Update 9.16, we will add one more source of useful information: we will be improving the battle interface to make it more informative.

In the latest update, we will be improving the battle interface, adding information about events that take place in-battle, and will be upgrading the fire-direction indicators. The following changes will be added to the game:

The display of this additional information can be configured in the game settings. Just open the new Feedback tab and set your preferences. You will be able to select standard or extended fire-direction indicators, configure the information that is displayed in the damage panel, and enable the displaying of in-battle events.

The Feedback tab will be available together with the release of the feature as part of Update 9.16.

The extended vehicle selector is another modification popular among players and will be implemented into the client in Update 9.16. This will allow for better navigation in the Garage and will make selecting the right vehicle quicker and easier than ever before. Players will be able to configure the vehicle display in the most appropriate way using the extended vehicle selector, and even players who have many vehicles will be able to select them easily.

Players will be able to select their preferred vehicle-display mode (standard or dual-row) in the Garage, with the dual-row vehicle selector being enabled by default – to select the required display mode, use the General tab in the game settings. 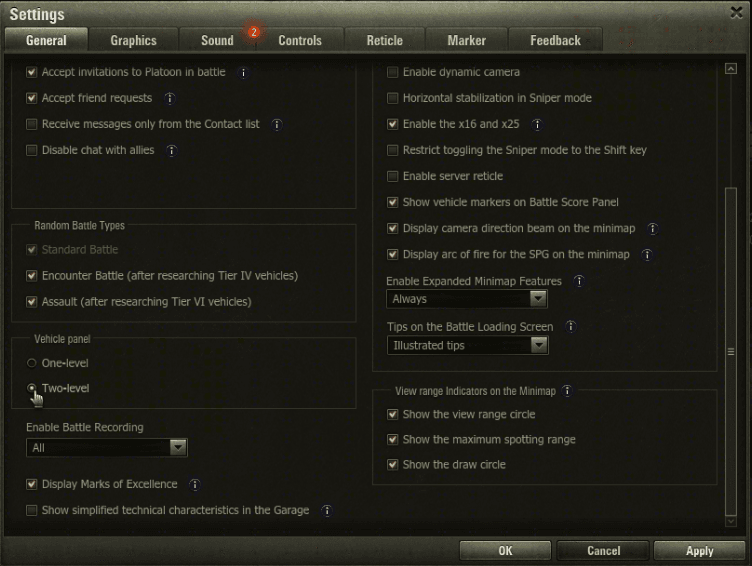 The main purpose of the Battle Chat is for coordinating the actions of you and your allies. Thus, the interaction between players is crucial to the battle's outcome. If a team coordinates during battle, they are likely to win. However, at the same time, cross-team communication can be used as a way to abuse or insult players.

Thus, several measures have been taken in Update 9.16 to solve the problem of inappropriate behaviour in the Battle Chat. Firstly, cross-team Battle Chat has been disabled for all battle types except Team Training. Secondly, players will be able to block messages from a particular ally. You can disable messages from abusive players until the end of the battle. To do so, hover over an ally's nickname in the Battle Chat and block the player. In addition, it is possible to add a player to your Blacklist or make a complaint about them.

Thirdly, the complaint system has been improved. Complaints of the same type are combined into one complaint in Update 9.16, thus making it easier to process them. The following complaints will remain: