Update 9.15 is coming. We've already told you about updated vehicle parameters in the Hangar and the changes to movement physics and sounds. Now it’s time to tell you about new features that aren't critical but no less important.

Personal missions – these two words mean a lot to any tanker. This is a new wave of Random battles, which can reward you with unique tanks, credits, female crew and much more.

In the new patch some mission chains for all five types of vehicle will be improved. The changes for personal missions were made based on the results from analysing their completion statistics and community feedback.

New Vehicles Filters in the Garage

In the aim settings, there will be a new display format: a full solid circle for the Dispersion indicator with a reload indicator. Also, regardless of the chosen display format, the maximum possible zoom will be increased - now players will be able to zoom in their aim by x16 and x25. Previously the maximum zoom was up to x8. The information about the current zoom level will be displayed on the screen as well. 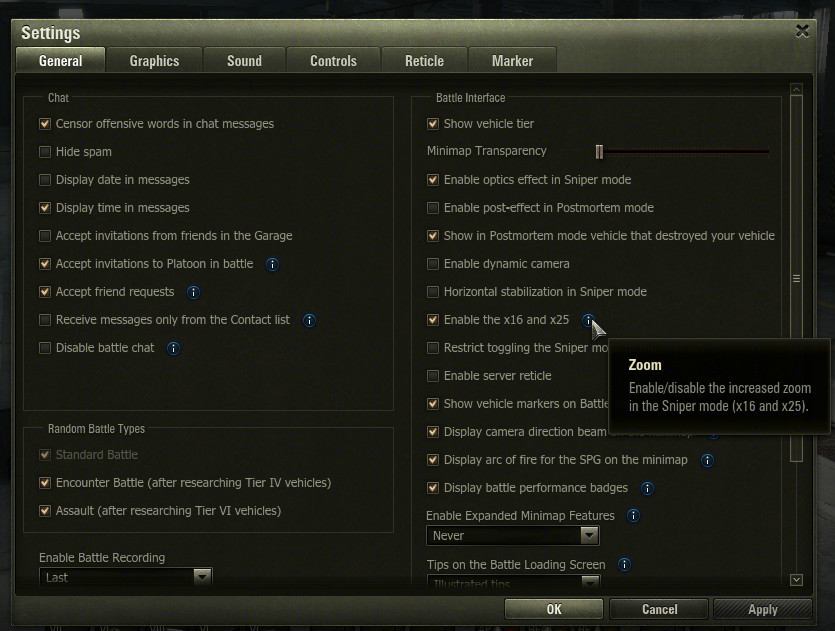 Ping of servers in hangar

Game servers will have their ping displayed, so that you can choose the most comfortable place to play.

Ping – is the response time of your PC to a request. In other words, it’s the period of time taken for a package to be sent from your PC to another PC and return.

Important! Game servers ping is requested only when necessary: when opening the login screen, when choosing a server to join, and when leaving a battle. Therefore, in comparison to third-party modifications, there is almost no load on the connection channel.

Notifications: End of Battle and Base Capturing

There are several factors that determine a victory: player “skill”, teamwork, luck, etc. Attentiveness is also important. Because of how enjoyable the hunt for enemy vehicles can be, it’s easy to forget about the battle timer and miss an opportunity when it runs out: you're busy finding that last light tank and suddenly you realise it's too late to capture the base before the battle ends. Everyone has experienced something like this at least once.

With the release of version 9.15, things will get better: there will be a clear notification about the end of the battle that can't be missed. The notifications will be displayed in two cases: a timer will appear when there are less than two minutes left, and there will also be a timer for the last 20 seconds of battle.

The indicators for base capturing will also improve player comfort. Now, besides showing how close to capture the base is, there will be a number to show how many tanks are participating in the capture, and the remaining time till the base is captured. With this information, you’ll be able to better plan your actions in advance by choosing the time and route to the base, and to estimate the chances of a positive outcome for your capture.

Some changes will be applied to the Proving Grounds mode. Moreover, the team list of Proving grounds has been increased to match the 15x15 format. The minimum number of players needed to form a team is 1. The maximum number of active players in a team is still 7.

If you'd like to check these features out yourself, join the Public Test!