The Sandbox test server is now live! If you have applied to participate, please check your mailbox - players accepted for testing have been sent instructions how to join the tests.

Important: Access to the test server can be terminated or restricted at any time for non-compliance with the EULA and Terms of Service. In particular, pursuant to paragraph 17 "Beta Tests" of Terms of Service, “the beta games, including information about features and functionality to be offered as part of the games, are confidential.”

*Any information sharing from Sandbox server (live broadcasts, video reports, etc.) is prohibited without coordinating it with Wargaming representatives. You can consent a publication of such materials in the special thread on the Sandbox forum.

Sandbox is a limited-access server for testing new balance prototypes in World of Tanks. With its help, we plan to test variants of new balance, and select the most effective implementation that meets all specified requirements and is approved by the game community. The primary goal is adjusting the balance for top-Tier vehicles. Only Tier X vehicles will be tested during the first iterations. Next, the approved solutions will be applied to vehicles of lower Tiers.

Vehicles available to players are limited to Tier X, and also to Light Tanks of Tier VIII. Each vehicle will have a crew with 100% in Major Qualification and enough Crew XP to train 3 extra skills/ perks. At the beginning of testing, players will be given a one-time crediting of 5,000,000, and each day they will also get 500upon logging in. In addition, the credit acquisition rate will be increased 200% compared to the standard game server. Also, the possibility to purchase premium shells for credits will be switched off.

Important: The changes tested in this iteration are not final, and as such they are not bound to be applied to the standard game servers in their current form. The changes that will finally be implemented will depend on the information collected and analysed throughout all iterations.

Some of the main game mechanics will be changed on the Sandbox server, in order to achieve the balance goals listed above.

Distribution of hits within the aiming circle

The goal is to decrease the effective firing distance, in order to increase vehicle survivability when being focused from far distances. Players will now have to aim their shots more carefully. The distribution comparison between Update 9.15 and the Sandbox is as follows: 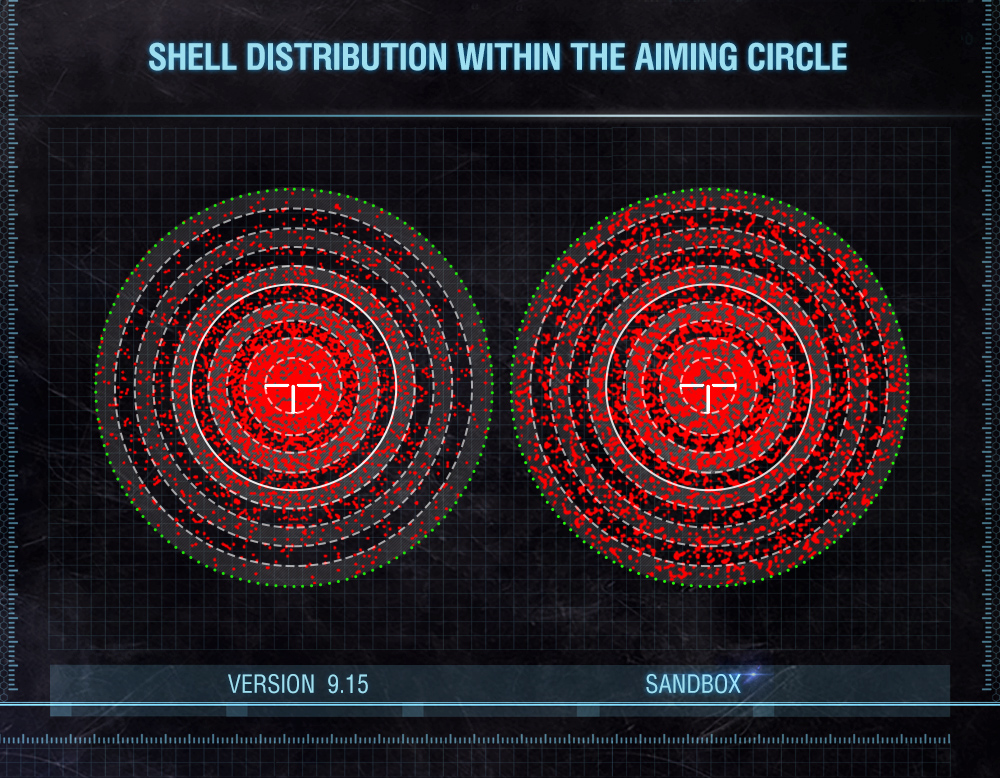 Armour-piercing capacity decreases more significantly depending on the distance, in order to increase the importance of armour in the game. Shooting from afar will become less effective - thus, players will be encouraged to engage in close-range combat. They will have to fight more actively and manoeuvre more in order to cause damage to enemy vehicles.

According to this feature, the chance of penetrating a vehicle frontally is decreased at far distances. Thus, heavy-armoured vehicles will be able to battle through the flanks.

Penetration reduction values over a distance, for the Sandbox are as follows. The initial distance of reduction is also specified:

Initially, there were few gun types in the game, but over time, many high-calibre guns have been introduced. Therefore, the guns should be reworked. Within the Sandbox tests, it is planned to test the new system of distributing damage per shot for different guns. The goal of the new system is to decrease the risk of being destroyed with one shot and increase the importance of the amount of damage a gun can cause per minute.

Since it is planned to increase the survivability/ time spent in battle, fast vehicles featuring poor armour will also be improved. It was decided to determine the relation between suspension speed and turret traverse speed for each vehicle type within the class and role systems. As a result, fast vehicles will be able to use different manoeuvres to outflank slow, heavy-armoured vehicles.

Currently, all vehicle types can perform different roles. I.e., vehicles of each type (except for SPGs and some light tanks) can perform multiple roles effectively. Thus, players use similar tactics when driving different types of vehicles, which makes the gameplay monotonous. The improvements listed below are supposed to diversify the vehicles in the game, according to their roles, and depending on the functions they perform. Seven in-game archetype roles have been distinguished on the basis of expert evaluation. These are the in-game roles that each vehicle should perform:

In general, if we talk about system changes, general reductions to manoeuvrability and View Range changes stand out, which contributes to role-based gameplay.

Remember: all suggested changes are not final and may be altered, depending on the feedback from the tester community and in accordance with gathered statistics.

On the Sandbox, the role of SPGs will be changed from damage dealers to support vehicles. In addition, SPGs will receive some new features:

Changes will be made to HE shells as well: the amount of damage caused with this type of shell will be decreased in most cases, but the dispersal of HE shell fragments (the radius of splash) will be increased. In short, SPGs will be dealing less damage to single targets, but their attacks will have a better chance of affecting multiple targets at once.