Those of you who have been playing the game for some time now, and have managed to climb one or multiple tech trees, know that vehicle appearance and parameters may not be the only things changing while advancing through the tiers. In fact, in many cases it is also the crew who may experience a change, both in the number and the role layout.

Players who have pursued the American medium tank line leading to the M48A1 Patton, for example, are well aware of what we are talking about: they were left with an unemployed Radio Operator after having advanced to Tier IX (top tier American mediums have four crew members instead of five).

With Update 9.6, we will be introducing a new special feature, which will remedy situations like that. This feature will help you to find work for your abandoned crew members, as well as enable you more freedom with the crew management in general. 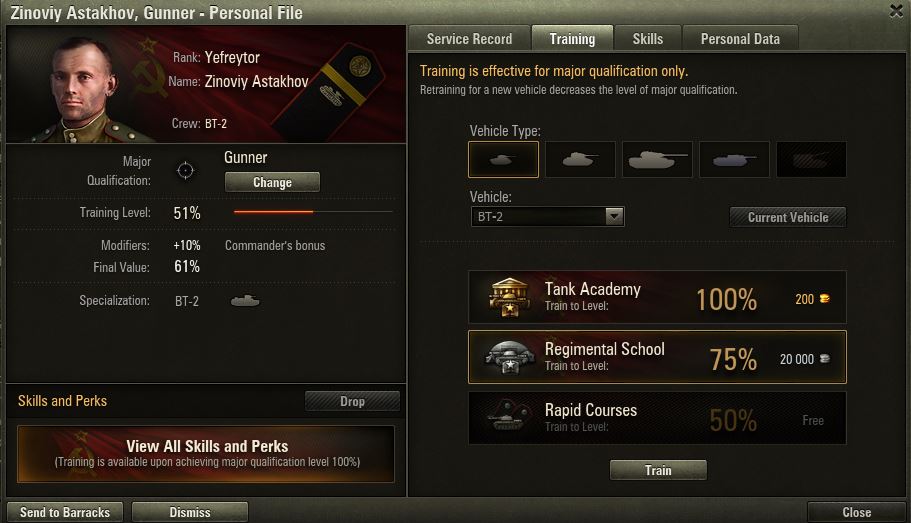 In order to change a crew member’s qualifications, open their Personal File. Here you can see that a new button was added right where their Major Qualification is displayed, called Change.

Clicking on it will open a new menu, in which you will be able to determine which role the crew member is to assume and on which tank. The change will be available only for gold and once initiated, it will also reset all of the tanker’s skills and perks without any additional costs.

Please keep in mind that the function works only within one nation. This means that you will not be able to requalify Soviet tankers to man German machines, American ones to drive Chinese tanks and so on.

Want to know more? Download the test client and check out the feature yourself!

Important: Please note that this feature will undergo extensive testing during the Version 9.6 public tests. Therefore, depending on the tests’ outcome, the requalification feature may be supplemented, amended or even discarded completely upon the official patch release.

The army is no place for slackers – get those crew members back on duty!