Please keep in mind that this is a preliminary set of features for 9.17. The final set will be revealed just before release.

Update 9.17 is now officially underway and with it comes a full line-up of new features and content: two branches of Swedish tanks, overhauled ricochet and overmatch mechanics, a few new HD vehicles, reworked minimaps, and other tidbits. While teams across the studio are diligently getting the game ready for the Supertest, we’re excited to shine a spotlight on each of the upcoming additions. Let’s get to it.

Supertest is a process of testing a project at the early stages of completion. In it, we’re checking whether a new version works and sniffing out the most critical issues. For World of Tanks, this is divided into two stages: first there are production tests of individual features, which happen during feature development (testing a new map, balancing a new vehicle, etc.); secondly, there are the version tests of full releases. Supertests are a great way of figuring out how game content works in a live environment with a small player pool. Usually, Supertests happen a month and a half before release.

If version Supertests prove that the features are ready, it’s onto Common Tests.

Coming off the production line in 9.17 is a branch of Swedish tank destroyers. All lightly armored, and therefore swift and mobile (unlike the majority of tank destroyers currently in the game), these newcomers will be able to occupy favourable positions first, deal solid damage with their powerful guns, and stay hidden thanks to their low silhouettes. As if that wasn’t enough, tiers VIII–X have hydro-pneumatic suspension and can adjust their gun traverse and gun using their hulls. They bring some extra heat to the battlefield as they all feature two modes: travel and firing. Intrigued? Well, we were. So, we caught up with the Game Balance Team to get some extra details and offer you a sneak peek of the Swedish TDs:

Another, hybrid branch starts with the first armored vehicles ever built by the Swedes, the light Strv fm/21, and introduces a variety of medium and heavy tanks. The three classic medium tanks revving their engines on tiers II–IV (Strv m/38, Strv m/40L, and Lago) are dynamic universal soldiers with good elevation arcs, perfect for newer tankers honing their combat skills and tactics.

Then, the real fun begins with the Strv m/42 (Tier V). Featuring exceptionally good gun depression (-15°), this mobile vehicle is a genuine stealth master, capable of picking off enemies and staying completely hidden on uneven terrain.

The Tier VI Strv 74 makes up for its poor mobility and thin armor with a powerful gun. Thanks to great gun depression (-15°) of Swedish tanks, it can take opponents out from afar and remain hidden. Prowling Tier VII is Leo who boasts the best dynamics and the biggest alpha damage for its tier, but lacks maneuverability and armor.

Sitting proud at tiers VIII–X, Swedish heavy tanks sport well-protected turrets, autoloader guns, and the nation’s trademark gun depression, inspiring new tactics, gameplay, and clever use of the landscape. The Tier VIII Emil I is a tough nut to crack due to its thick frontal armor, decent mobility and speed, combined with an autoloader gun. Comparable to the AMX 50 120, the Tier IX Emil II outperforms its French brethren when it comes to frontal turret armor, and has better gun depression. Crowning the branch is Kranvagn with its well-armored turret, autoloader gun and excellent gun depression.

Based on your input from the 1st Common Test, we decided to postpone the overmatch and ricochet mechanics revision.

Designed to ensure enjoyable gameplay for tier VIII–X Swedish tank destroyers, the mechanics revision was shown to you during the Common Test. You generated an impressive amount of feedback, providing us with plenty of in-game data and a number of reasonable suggestions on the new setup. This feedback allowed us to conduct a quick analysis, which showed that the reworked rules could influence the overall game immensely. They could lead to some deeper changes to vehicles strong and weak spots: a lot more ricochets where chances of them used to be zero.

Hot on the tracks of the arrival of Swedish tanks comes a change to how ricochets function within the overmatch mechanic. Replacing the current system will be a single, simpler mechanic that takes into account both the impact angle and the shell caliber. This will boost the combat efficiency of highly-sloped tanks, including Swedish tank destroyers.

With the impact angle included into the equation, overmatch will result in more normalization and a greater ricochet angle. The latter will depend on the caliber/nominal armor thickness ratio. Formulas asides, you’ll be able to bounce high caliber shells with thin, but highly sloped armor if the impact angle is large, and be able to penetrate well-armored vehicles with shells that aren’t x3 the armor thickness, if they strike the armor at a small impact angle.

Let’s say, you are firing at a 105mm armor plate with a 40mm gun. Under the current rules your chances of penetrating it are zero. Following the 9.17 release, all you have to do is aim so that your AP or APCR shell strikes the armor at the angle as close to the right angle as possible. And vice versa, knowing your weak spots and angling to maximize the impact angle will let you bounce enemy shells off thin armor. This new mechanic will come in extremely handy when Swedish tank destroyers roll out.

The work on game balance is in full swing. And with the salvo of tweaks coming in 9.17 we’ll improve combat parameters of significantly underperforming Premium tanks. Thanks for being vocal about them! Your feedback combined with battle stats were instrumental in fine-tuning their characteristics. 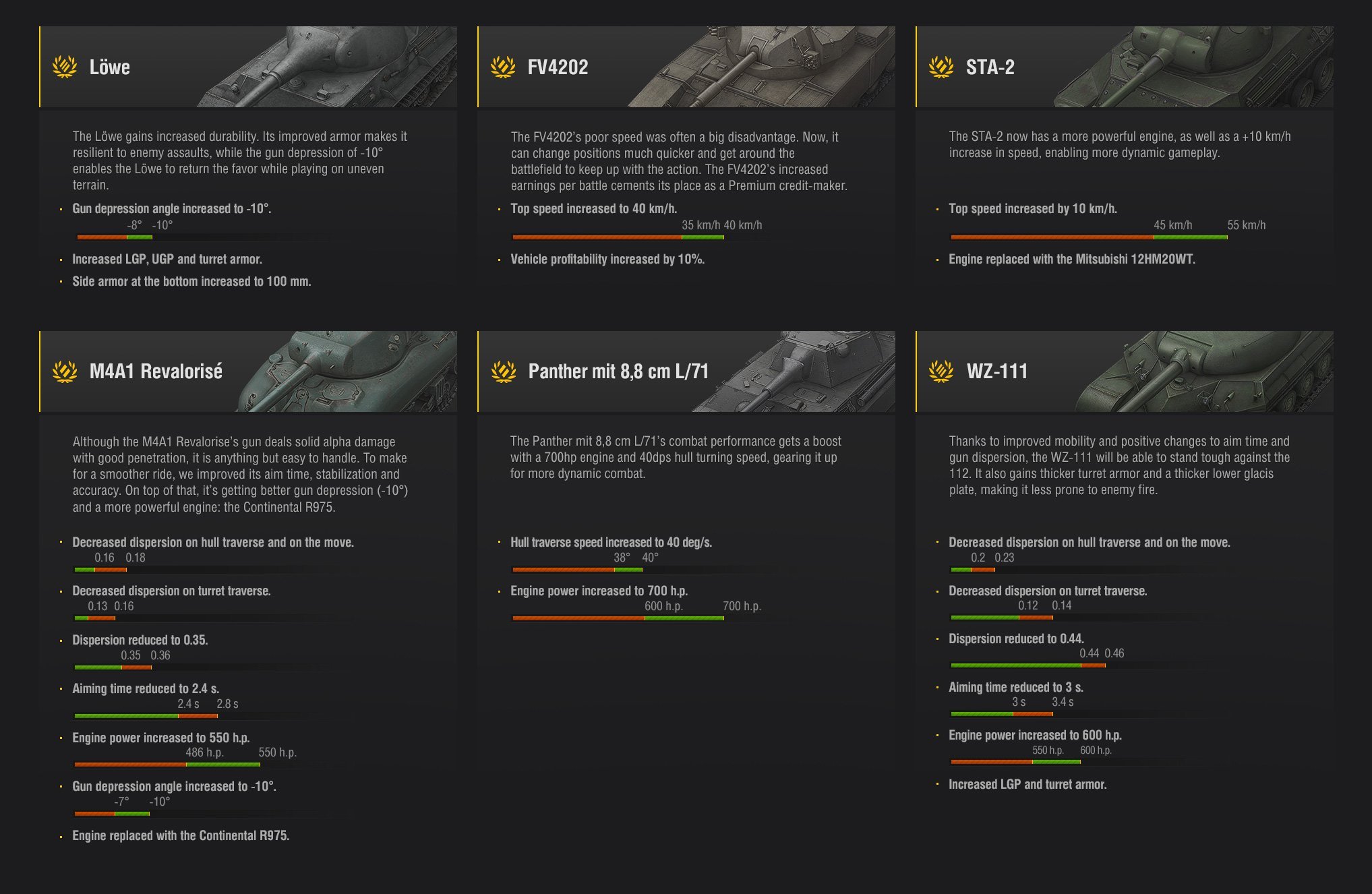 On the sound stage, we’re back at it with a few improvements:

Another seven minimaps are getting remastered visuals: Karelia, Pilsen, Sand River, Mountain Pass, Tundra, Windstorm, Winter Himmelsdorf. Get a first look in the gallery below:

If you like how your tanks look in high definition, explore the fresh set of 11 vehicles that will be getting their HD models in 9.17:

See you on battlefield!