The time has come to swing the Soviet hammer. This edition of the Top of the Tree special will focus on the powerful Soviet Tank Destroyers. Follow the research line leading to the Object 268 and enjoy great discounts and credit income bonuses:

30% discount on purchase and 30% more credits earned with the following Soviet vehicles:

Use this opportunity to earn extra credits while driving these fine tanks or get them for 70% of their normal value! 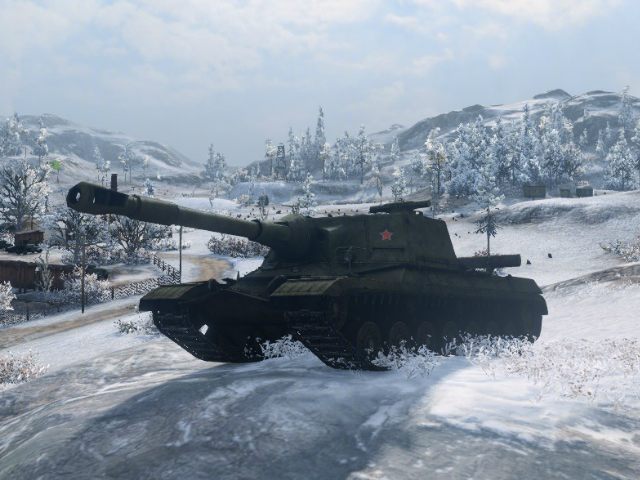 The Object 268 is an outstanding vehicle in its tier: it has an impressive penetration value of 303 mm with standard armour-piercing ammunition and quite a good rate of fire, which combined with the average of 850 points of damage per shot gives this vehicle the best damage per minute ratio of all Tier X tank destroyers. In addition, the Object 268’s gun is very accurate – a feature which distinguishes the tank from many other Soviet vehicles. It is also worth mentioning that just like most Soviet Tank Destroyers, the Object 268 sports very good camouflage values, and thus it is very difficult to spot on the battlefield. Another great trait of this vehicle is its good speed and manoeuvrability which allow it to quickly change positions should the situation demand it.

Despite these outstanding features, the Object 268 is not free from disadvantages. The most prominent is the armour which is decent only on the front and quite weak anywhere else. Moreover, the vehicle can be prone to module damage when shot – the tracks, ammo rack and fuel tanks can  often suffer damage in battle. In addition to this, the gun arc of this vehicle is quite limited and will force you at times to turn your entire vehicle while aiming, thus negatively affecting your aiming. Last but not least is the huge commander’s cupola – it’s an obvious weak spot so you can be sure that the enemy will aim for it when confronting you from the front.

The Object 268 is a very versatile tank. Its good accuracy and camouflage values allow you to play the role of a sniper and take down enemy vehicles from afar. If you want to play this tank in this fashion, make sure to install appropriate equipment in order to maximise your effectiveness. We would suggest getting a Large Calibre Gun Rammer for a better rate of fire, a Camouflage Net to make you harder to detect by the enemy, and a Binocular Telescope to improve your view range.

Player tip: Please bear in mind that as your gun arc is quite narrow, so you need to be careful not to move your vehicle while aiming at a target. If you do, your aim will be reset, and your Camouflage Net and Telescope will stop working. You may consider blocking your vehicle with the X key in order to prevent involuntary movement from happening.

In addition, if you see your Object 268 as a sniper, make sure to train your crew accordingly. Here are our suggestions for the crew skills:

If sniping is not your thing, you can use the vehicle’s good speed, manoeuvrability and angled frontal plate for close-quarters and mid-range combat. However, be aware that if you use this style you need to be extra careful to not get flanked by enemy tanks. As you have no turret and weak side-armour, you have no means to defend yourself in such situations. Therefore, we strongly advise you to always travel with at least one teammate who will protect your flank. In addition, never forget to retreat to safety after each shot for reload – most mediums and a lot of heavy tanks in your tier have a better rate of fire than you, and given the chance they will gladly shower you with lead while you are waiting for your loaders to finish their job. Brawlers are strongly recommended to install a Large Calibre Gun Rammer, an Enhanced Gun Laying Drive and for the third slot either Improved Ventilation or Coated Optics. As for the crew, here are our skill suggestions:

Get yourself one of these monsters and bring the pain, Commanders!