Top of the Tree: Maus

The second half of September will be dedicated to the heaviest of the heavies! Follow the research line leading to the colossal Maus and enjoy great discounts and credit income bonuses:

30% discount on purchase and 30% more credits earned with the following German tanks:

Use this opportunity to earn extra credits while driving these fine tanks or get them for 70% of their normal value!

These bonuses will be available from 15th September 07:10 until 30th September 07:00 CEST (GMT +2). That’s two full weeks to feel the power of the German steel! 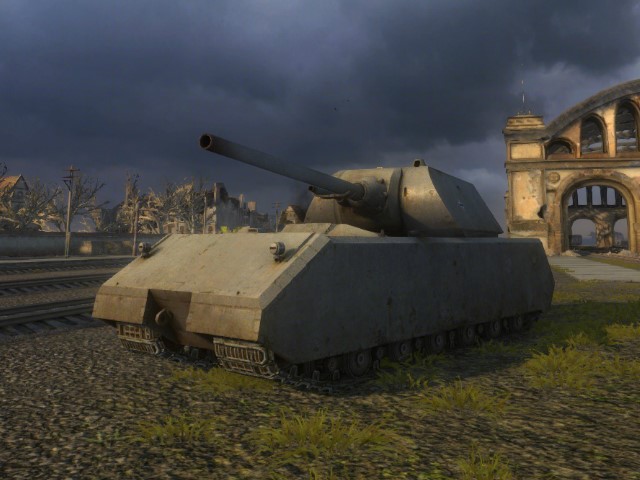 “Try getting past me, I dare you!”

Panzerkampfwagen VIII Maus was a German World War II super-heavy tank completed in late 1944. The basic design was presented to Adolf Hitler by Ferdinand Porsche in June 1942 and was subsequently approved. Even though the vehicle initially was planned to weigh around 100 tonnes, multiple changes in design emerged during the development process, including the armament, transmission, engine type and armour thickness. Necessary technical adaptations as well as Hitler’s own instructions resulted in the Maus reaching the weight of around 200 tonnes by 1943 when the first prototype was built.

By October 1943, the production order for the super-heavy tank was cancelled, and in November Hitler also stopped the development process altogether. However, the construction of the prototypes was to be continued. In total, there were two prototypes assembled: the first was delivered lacking the turret by Alkett Company in December 1943 for immediate testing, while the second one was manufactured by Krupp along with a functioning turret in March 1944.

Both prototypes were captured by the advancing Soviet forces during the last weeks of war. The hull of the first prototype was combined with the turret from the second one and then sent to the USSR for further testing. Once these were completed, the Maus was claimed by the Kubinka Tank Museum for storage, where it is available for viewing up to this day.

Maus is the biggest and heaviest tank in the game. It is also theoretically the best armoured vehicle, sporting a hull with an impressive 200 mm thick frontal plate, 185 mm thick sides, and a turret with 240 and 210 mm thick front and sides respectively. Even the vehicle’s rear can be difficult to damage as it is protected by 160 mm of steel on the hull and 210 mm on the turret. In addition, the Maus has an outstanding pool of 3000 hit points, so even if you do manage to successfully penetrate its armour, you will still have a long way to go before it’s completely destroyed. Another great advantage of this German colossus is its superb view range of 400 m, which allows you to spot your enemies from afar.

These great armour values come at a very high price, though; weighing around 190 tonnes, the Maus is extremely slow, cumbersome and has a dreadful hull and turret turning speed. As a result, it can be easily flanked even by other heavy tanks. Another downside of the Maus is its size – being basically a mountain of steel, this tank is very easy to spot, very easy to hit, and if there are SPGs present in the enemy team, rest assured that this vehicle will be their primary target.

The 12.8 cm gun mounted on the vehicle may not deal the most damage in its tier, but it’s still a reliable piece of weaponry. It has a relatively good rate of fire and decent penetration, damage and accuracy values, which allow you to aim for weak spots and make any enemy trying to get past your position to reconsider their tactical choices.

Player tip: please remember that the tremendous weight limits Maus’s speed to 20 km/h. However, the vehicle is equipped with a 1,750 h.p. engine which allows it to reach this limit almost immediately. Therefore we advise you NOT to bother trying to push the Maus from behind – you won’t make it go any faster. Doing so will only annoy the Maus player, waste your own time, make you stay behind when you could have been assuming strategically important positions on the map, and worst case scenario, you may also damage your own vehicle in the attempt.

While driving the Maus, remember that your primary role is to be the team’s shield – draw the enemy’s attention and soak their fire while your teammates get their hands dirty! Also bear in mind that even though the armour plates of your vehicle are very thick, only the frontal plate is angled. This means that your sides don’t have the extra armour effectiveness stemming from angled plates and thus are easier to penetrate. Therefore it is crucial that you position your vehicle towards incoming fire in such a fashion that enemy shells will hit you at an acute angle. Doing so will maximise your armour’s effectiveness while improving the chance of a ricochet at the same time.

Due to the fact that the Maus has a rear-mounted turret, it is very effective while using the side-scraping tactic. Applying this tactic properly will minimise your exposure to the enemy while maximising your armour effectiveness. All you need is some form of cover, such as a house or a huge rock. Side-scraping in bottle-neck passages can even allow you to single-handedly stop a whole group of enemies. Here is an example of a good and bad side-scraping: 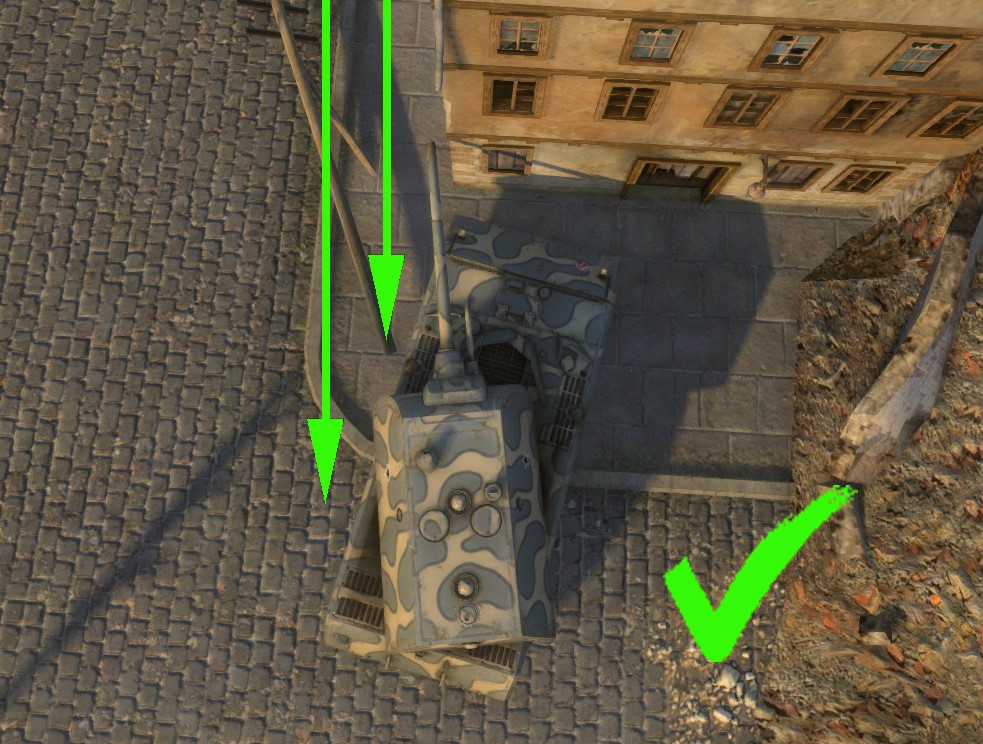 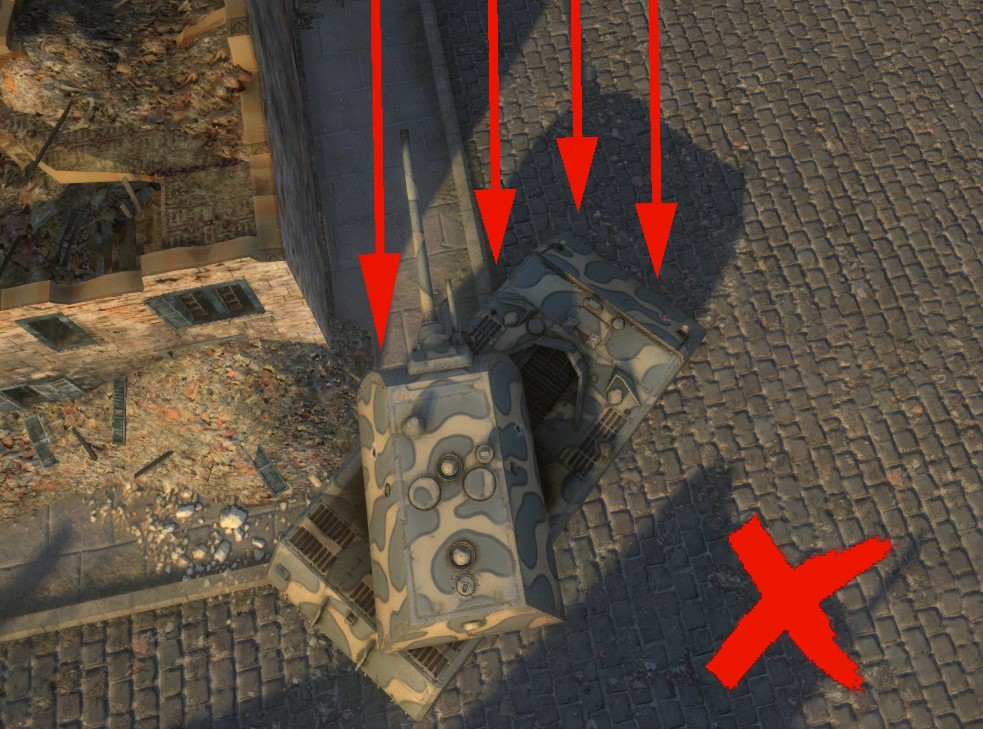 Fighting on open maps is very difficult for this vehicle, especially if there are SPGs present. In such cases, stay close to your fellow teammates in order to minimise the threat of being flanked, and drive to the nearest cover as soon as possible. Only move forward when you are sure that there are no scouts or other vehicles in the area that could spot and mark you for enemy artillery.

When it comes to equipment, it is a very good idea to invest in the Super-Heavy Spall Liner as it will reduce the damage from artillery and HE shells by 50%. The second slot can be used for a Large-Calibre Tank Gun Rammer – improved reload time will always come in handy during combat. As for the third slot, you can decide between the Vertical Stabilizer (improved accuracy during vehicle movement and turret rotation), Improved Ventilation Class 3 (+5% to all crew skills) and the Enhanced Gun Laying Drive (faster aiming time) – pick the one you find most effective.