It’s Halloween time! We have a suitably spooky special offer for you to enjoy on this day of parties and scares.

Up to 50% discount on camouflage

Are you dressing up for Halloween? Get a nice costume for your tanks as well, whether spending gold or credits.

Sweets and sugar and treats, oh my! Stuff your face on all things sweet for less, whether spending gold or credits.

All you need to do is post a picture of yourself in a Halloween costume playing World of Tanks or World of Warplanes. The only condition is that the costume needs to be related to tanks or warplanes in some way. Check out the details on the forum.

The origins of Halloween go back to Celtic and Gaelic festivals held over 2,000 years ago. With the spread of Christianity across Europe, the existing pagan festival became known as All Hallows Eve – the evening before the important holy day of All Saints Day (1st November).

Halloween as we know it began in the United States in the late 1800s. Immigrants from across Europe flocked to America to start new lives and brought a host of customs with them. These included activities such as dressing up in costumes, trick-or-treating and pumpkin carving. At this time it was very much an adult-orientated party and by the 1920s it was a secular community event.

During the wartime period of the early 1940s Halloween was put on hold, mainly because of sugar rationing and to show respect for the combat forces. That didn’t stop the soldiers themselves still having a good time, though. The picture below shows American soldiers partying with local French girls for Halloween. 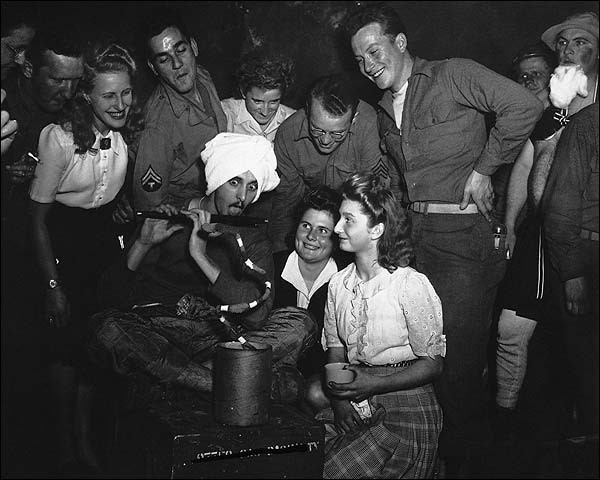 In the 1950s, a wave of Halloween-related vandalism led to the wide-spread rebranding of the event as a children’s party. For many years, Halloween was purely for American children. However, during the 1980s it again became an event for all ages.

It is only in recent years that Halloween has been celebrated more formally in Europe. Although it is still considered by many to be a purely American tradition, people in all countries like the excuse to dress up and have fun!

Will you be trick-or-treating this year, commanders?