The Rampage event has ended. All remaining rental tanks will be removed once their rent time is due. Thank you for participating.

The Rampage event will be available with the 9.10 update. The battles will be held in two of the already known formats: Domination and Steel Hunt. 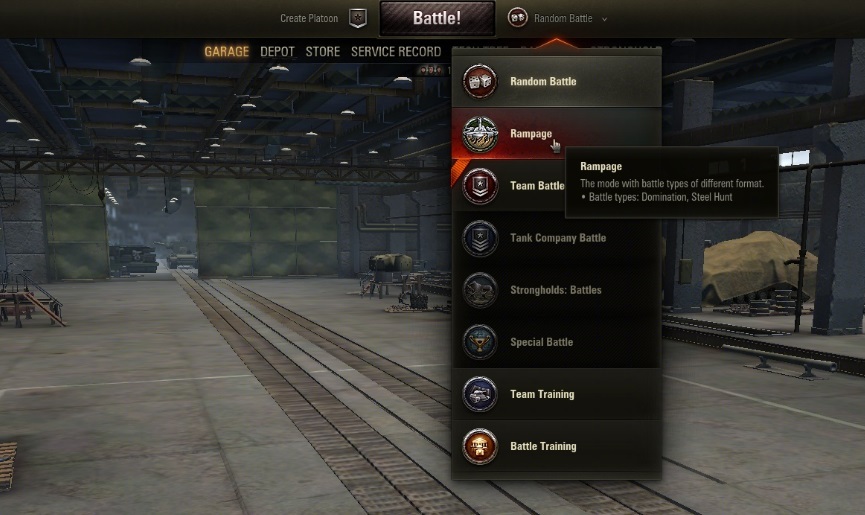 After that you’ll be able to choose your battle format. 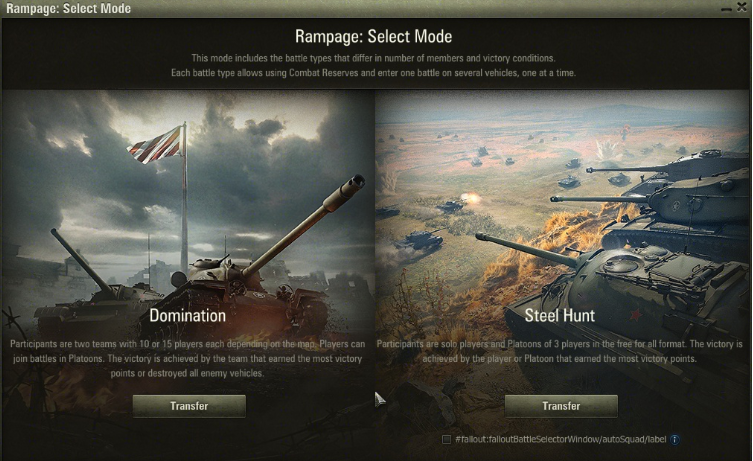 Solo players and platoons will be able to take part in battles depending on the format. Standard battle duration is up to 15 minutes.

In order to participate in battle, players need to choose from one to three tanks from Tier X. There are no limitations on vehicle classes. To start a battle, prepare all the vehicles and click on the “Battle!” button.

Key Features of the Game Event

The main characteristic of this new game event is the division of combat tasks between solo and platoon players:

During battle, the following Combat Reserves will be available to players:

Combat Reserves will become available after performing effective actions in battle: dealing damage and destroying enemies. To use Combat Reserves, press 7 or 8 and choose the target point. When using Airstrike, you will also use the mouse to adjust the direction of the incoming aircraft, affecting the shape of the bombardment zone.

Three battle formats will be available for players:

Platoon format: Four platoons take part in the battle. Battles are fought in a Free-for-All format. The first platoon to score 750 Victory Points, or the platoon with the most points when time runs out, wins. Victory Points are earned for delivering flags, destroying enemies, and dealing damage. In the new version of Steel Hunt, you will be able to tell which platoon a certain player is a part of.

Single format: Twelve players fight in the battle. Battles are fought in a Deathmatch format. There are no flags - Victory Points are earned for dealing damage and destroying enemies. A player can win either by earning 200 points (ending the game) or by having the most points when the timer runs out.

After your tank has been destroyed, you can rejoin the battle with one of your pre-chosen vehicles.

Respawns are unlimited, but when a tank is destroyed, its freeze time increases:

Each Domination battle will be fought between two teams of 10 or 15 players, depending on the map. The participation is available for solo players and platoons. Battle duration is up to 15 minutes.

The goal is to score more Victory Points than the enemy. The battle ends immediately if one team scores 150 Victory Points before time runs out. Victory points can be earned for taking captured flags to the special zones and for destroying enemy vehicles.

In order to take part in a battle, players need to choose from one to three owned tanks from Tiers VIII, IX or X. Moreover, among the chosen vehicles, there should be at least one tank from Tier X. To start a battle, prepare your vehicles and click on the “Battle!” button.

After your tank has been destroyed you can choose the next one in the context menu and get back to the battle. You can’t go back into battle with a previously destroyed vehicle.

During the battle you can pick up and carry flags. A flag is picked up automatically when your vehicle touches it. Having picked up a flag, you need to take it to a dedicated deposit point. When you do, your team will be awarded a certain amount of points and the flag will return to its initial position automatically.

On the map there will be a certain number of zones to repair a vehicle and replenish ammunition. To activate these zones, a player must go inside of the yellow circle, marked on the mini-map with the correspondent icon and wait five seconds without receiving any damage and without leaving the circle. If a tank gets damaged, the timer is reset.

The zones have a cooldown of 1 minute. This means that if you have used it, you must wait 60 seconds before you can use it again. The cooldown is counted for each player individually, which means that several vehicles from both teams can use it at the same time.

In random battles, special battle missions will be available. To complete these missions, it will be possible to rent three vehicles, which can only be used in the Rampage event:

Rented vehicles will be visually different in comparison with their analogues, though their characteristics will remain the same.

The rental period is 24 hours. Once the time is due, the vehicle will disappear and you will have to complete the mission again if you want to use it once more.

The first time a rental vehicle is credited, it will come with a crew with 100% Major Qualification. Once the rental time is due, the crew will disappear along with the tank. However, the next time you rent that tank, it will appear in your garage with the same crew and the same level of training as it had at the time of removal.

When the rental period is over, gained experience on these vehicles will be possible to convert into Free XP.

Once the event is over, the crews will be transferred to your barracks. If you don’t have enough bunks, the tankers will be placed in temporary ones that will disappear automatically when you dismiss or reassign the crew to a different vehicle. All Equipment and Consumables present on the vehicles at the end of the event will be demounted for free and placed in your depot.

Time for some tank rampage, Commanders!