The first day of the Intel Extreme Masters has come to an end successfully with great results. During the group stage all the teams fought each other to determine who will be battling for the first place in the finals.

Every one of the four teams taking part in the last stage of the tournament managed to put up an amazing fight to give the crowd a good show. Each time the tanks rolled out onto the battlefields, the competition was fierce and not  one tank was given up without a fight.

The results of yesterday’s tournament day are available on our dedicated page and clearly show that the teams were evenly matched. We have no doubt that all four of these teams are worthy of fighting in the first season of the World of Tanks Pro League. An achievement they earned by getting to the group stage of the Intel Extreme Masters.

The events of Day 1

The teams - namely SPALE, 1SBP Zawisza, Kazna Kru and Lemming Train - encountered each other in a series of battles during the group stages. The teams are fighting in rounds against each other and to make a long story short – the two best teams will take part in the fight for the 1st place, while the  remaining two teams, fight for the 3rd place. So far SPALE has got the best score, while Lemming Train and Kazna Kru are just a little bit behind.  There is everything to play for and the nothing is decided yet! Today the qualifier stage will end and we will see who will fight for the title of the IEM champion! 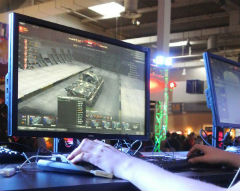 What is at stake today? Well, all of the teams have already qualified for the Wargaming.net League and are fighting for prizes worth a total 2.500.000 Dollars! After today, the teams will walk away with a total of 10.000 Euros in cash! Will they put up a good show? We are sure they will! Wouldn’t you, for such a prize?

This sums up the first day of the Intel Extreme Masters and the first big matches of the Wargaming.net League. We hope you enjoyed the live stream and would like to encourage you to join us on location here in Hanover or on the stream later today to watch the grand finale.

You can download the replays of yesterday’s matches and watch the professionals play to learn from the best!

Who will win the grand prize? Who will score the most epic of all scores?