Amongst the teams present in the semi-finals, there were two teams from the South East Asia server, one from North America and one from Russia. The only certainty was that, given the brackets, one of the Asian teams would make it through to the final.

In the first semi-final match, we had USA Fulcrum Gaming versus The RED: Rush.  The Americans put up a good fight, but ultimately they were rolled over 3:0 by the powerhouse that is the RED: Rush.

The RED: Rush passed to finals and continued fighting for first place. Americans were to meet one of Asian region teams in battle for the third place.

The second battle was the Asian showdown - Vietnam against Chinese.

This fight was much more evenly balanced, going to a full five matches. This was an amazing and very closely fought battle that started with the Vietnamese Anubis Empire gaining the early lead but eventually resulted 3-2 in favour of the Chinese, who made full use of the home crowd advantage:  WaveKnight made it to the finals!

It was now time for the final.  The RED: Rush was considered to be the favoured team in the finals (actually in the whole tournament) and they lived up to this winning reputation.  They had smashed their way through the group stage and the semi-final, and didn’t break the trend in the final.  Three maps were enough to show once again that experience is the key to success. Congratulations!  Very well played and very well deserved.

Keep an eye on the news for more material coming soon, including interviews with the European teams.  In addition, the replay (with English commentary) of the final is currently still available on the live stream.  Just fast-forward to 04:20:25 to watch the final from the beginning!

Once again, congratulations to all the teams for making it to China at all, and well done to the RED: Rush for winning! 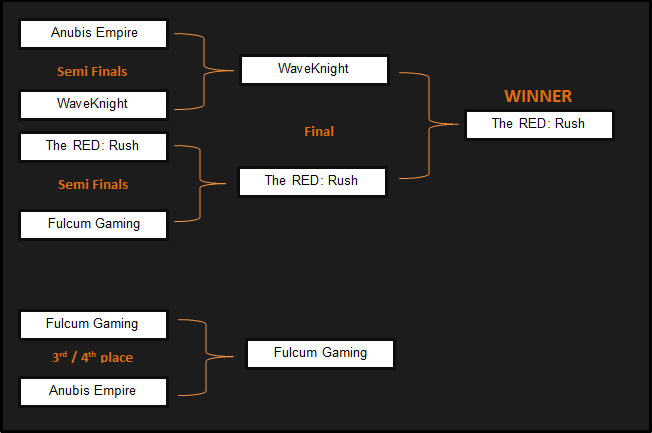 Remember their nicknames. They are the best players in the world: