The League is live this Thursday at 19:00 CET with Kazna Kru vs GoHard, followed by DiNG vs Utopia at 20:30 CET. 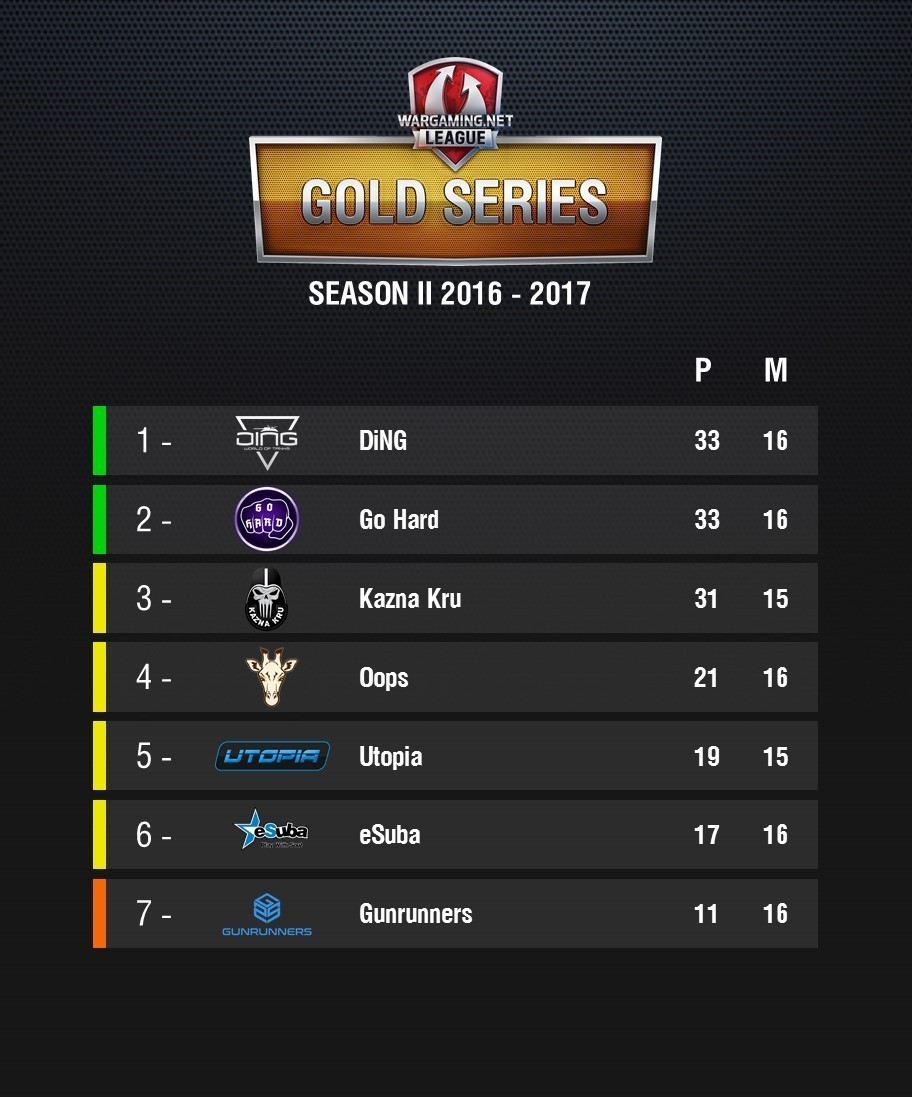 Utopia has been lacking consistency this season, with only 5 wins and 10 losses. Both teams played conventionally this match, and avoided experimenting too much. Utopia took an early lead, 4-1, thanks in part to big mistakes from Gunrunners. One of these ended up in the weekly highlights as Will fell on top of his team mate and destroyed himself. That wasn't the end of it though, as Gunrunners somehow found the strength to turn the tide, taking all the following rounds until the end in an astonishing comeback.

One of the biggest upsets of the season! How could Go Hard, a team currently fighting for the top spot along with Kazna Kru and DiNG, lose against eSuba, who are struggling to stay in the top 6 and avoid playing relegation matches? Great play from eSuba and communication mistakes on the side of Go Hard evened the odds. Picking both rounds on Cliff seemed to give eSuba the confidence they needed to make the difference in this match, and they actually ended up outplaying Go Hard on Prokhorovka. An unpredictable result, and a great watch.

Despite gaining a tremendous 4-1 lead over DiNG, Oops were unable to close out the match and ended up losing 5 : 4. Oops clearly had the advantage over DiNG and outplayed them on the first few maps. DiNG showed great courage however, and were able to grab those two vital points.

Nobody knew what to expect from Kazna Kru vs Gunrunners, but it didn’t take long for everyone to see that Kazna weren’t messing around. Winning the match 5-1 was a strong message from them to DiNG and Go Hard: they are looking to finish strong this season and take one of the two top spots.

In this match, Oops seemed much better prepared than eSuba. They adapted very well to the current Maus-based compositions. With their Maus and Type 4 heavies, they seemed much more in control than they usually do and took down eSuba in quite an easy fashion.

The highly anticipated match for the top spot turned out to be way more one-sided than expected. Go Hard was just one step ahead on every map, prevailing again and again with better strategies despite solid play from DiNG. The current champion fell hard this time, but these two teams are bound to meet again very shortly in the finals, unless Kazna Kru decides otherwise...

Things are heating up and everybody needs points at this time of the season. The match was even at the start: the teams traded rounds on Ruinberg and Ghost Town with an unusually heavy use of Maus tanks. Things really kicked off on Steppes for Kazna, as they won both rounds on the map, and then on Cliff where Utopia wasn't able to break their defence.

This is one of the matches Gunrunners desperately needed to win to avoid 7th place, which would make them play the relegation matches for next season. Oops on the other hand need points to score a higher position in the rankings and possibly face an easier opponent in the playoffs. They also could potentially hope for a spot in the Grand Finals, as they do already have some points from Season I. As a reminder: Grand Finals points are earned in both seasons, and the three European teams with the most points at the end of Season II will qualify to battle against the rest of the world. Unfortunately for Gunrunners, Oops was having a good day and took a solid 4-1 very early. Ghost Town was the real highlight of the match, with multiple one-shot fights all the way through.