And remember, the WGL portal is also up and running, so if you want more information or if you are interested in what's happening in the other regions too, go check it out! 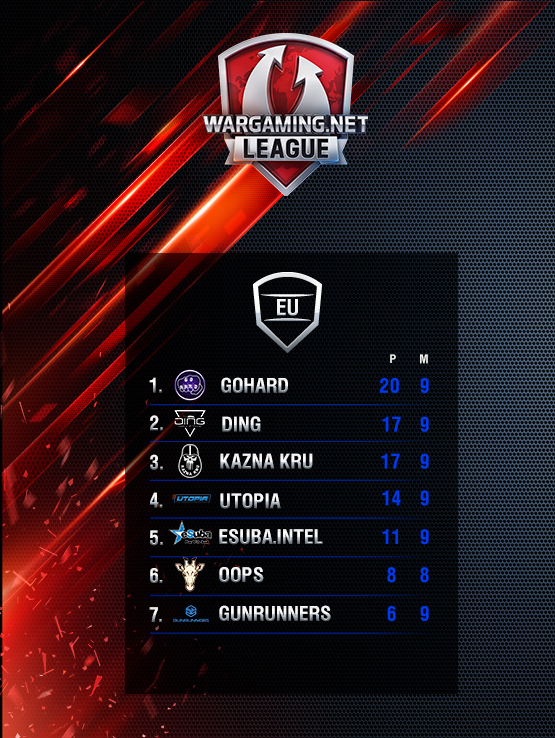 A total landslide for Utopia. They dominated Gunrunners in a very one sided victory. The match was over very quickly.

DiNG took an early 4:0 lead, and would have won the match if not for the remarkable spirit of Kazna, who after outplaying DiNG on Ghost Town (4:1) continued to win every other round including the tie breaker!

The teams exchanged blow for blow on Cliff. Mines however was a different story as DiNG showed us why they are the current champions, making quick work of eSuba. The team carried their advantage throughout the match to seal the deal on Steppes with a great performance by Koreetz.

With aggressive play, Gunrunners managed to break Kazna on Mines, with the help of a nice blind shot on Kazna's artillery in game one. The teams then traded rounds all the way to a nail biting tiebreaker that ended with Veco falling down a Cliff, causing his own destruction.

After losing to eSuba in their first match of the season, Go Hard was out for revenge. They also had first place to defend, and it showed. The first map went in their favour with better positioning and control. Himmelsdorf provided some funny moments on the livestream, while Ghost Town offered some dramatic games. A close and pleasant match to watch.

While DiNG is currently close to the top of the standings, Oops is sitting at the bottom with Gunrunners. As they usually do, Oops played rather aggressively in all rounds, even when defending, but it did not work out for them. Risky play and bad positionning cost them too much and they could not hope for a better result here. Despite their obvious individual skill, there is work to be done for Oops.

Another 2 : 5 defeat for the Giraffes. In fact, all of their defeats so far have been on the same score. This is also their third defeat in a row, a rather worrying situation for them. Go Hard on the other hand were looking solid, despite some occasional hesitant moves.

Kazna had a hell of a weekend playing in three tiebreakers. After defeating DiNG and then losing to Gunrunners, they were able to defeat Utopia 5:4 in a back and forward match. Throwing caution to the wind, Utopia gambled on an all Batchat tactic on Ghost Town for the tiebreaker. Fate wasn’t on their side however and Kazna were able to take them down.