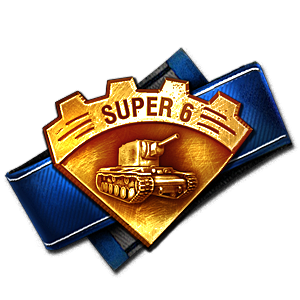 The Super 6 tournament is the younger brother of the Easy 8 and Mangled Metal. In this tournament, Tier VI vehicles battle in teams composed of 14 players. The Super 6 is currently the most popular Wargaming tournament and every time it is run it sets a new record for the number of signups.

In the most recent iterations, around 10% or more of the players on the server took part in the first qualifying round of this tournament. That’s a huge number of people who can’t be wrong!

If you want to try your skill against a huge audience of organised teams, this is your chance! Read the rules and look out for the next tournament announcements!

The prizes for the Super 6 are listed in the below table.