The Mangled Metal Cup has arrived!

You’ve been waiting for it, and here it is at last!  All out no holds barred carnage!  Do you have what it takes to pit your mightiest battle tanks against those that dare stand in your way? 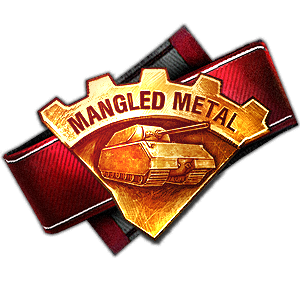 We recently announced the Super 6 Cup as being the first in a series of new tournaments for World of Tanks.  Stay tuned for news of the Easy 8, but for now it is now time to introduce the Mangled Metal Cup!

The Mangled Metal Cup has no maximum tier limitation on any tanks! Teams can be up to 14 members with 4 substitutes, but we advise you to make a full team for your opponents will show you no mercy!

The first, second and third placed teams will receive a gold prize and the Mangled Metal quarter of the coveted “EU All Star” medal.

If you want to enter the Mangled Metal Cup, you have until the 16th July 2012 to register your team and be accepted.  Remember to click “Apply for Tournament” once your team is completed as we cannot approve any team that doesn’t do this!

Matches are scheduled to take place on Wednesday 18th July and Wednesday 25th July with the final on Wednesday 1st August.  Matches will always take place between 19:00 and 22:00 CEST (17:00 to 20:00 GMT).  Teams will be automatically invited to games from 18:15 onwards.  You can read more about this process here.

Feeling lonely, or unsure where to find enough people for your team?  We have created a special forum thread for teams to look for players and for players looking for a team!

And here are the rules:

Good luck in the Mangled Metal Cup and stay tuned for news of the Easy 8 Cup which will be using the current professional league rules.