The third installment of the Super 6 Cup has come to a close! After many exhausting battles and one of the most exhilarating finals we have seen so far (even going to a 6th deciding game), we finally have our winner: Quo Vadis! Quo Vadis had a difficult path to the Super 6 finals as they had to overcome some major competition in teams like Ace of Spades, Spale, Division-Edelweiss and the winner of the Mangled Metal Kazna Kru in the finals.

After multiple inconclusive trips to the later stages of our Wargaming tournaments, Quo Vadis finally made the big leap and won it all at the most recent Super 6. Now they’re officially on the map, showing that they have blossomed into a force to be reckoned with in the Wargaming eSports scene! 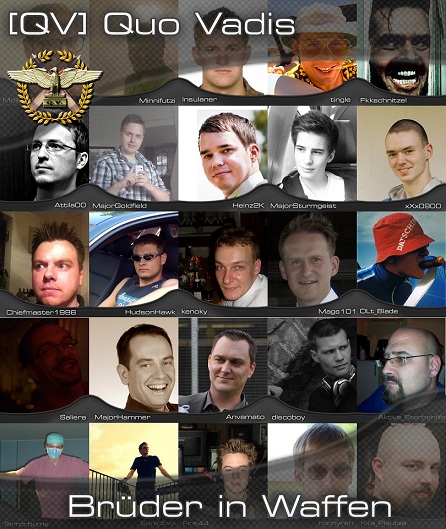 Could you tell us a bit about the history of Quo Vadis?

Basically we are formed out of 2 successful 3on3 ESL Teams (BAM! and NoMam!).  At the time NoMam! was looking for sponsor and found Quo Vadis, who wanted to make a Top Clan out of a previously unknown team. Then Bam! entered Quo Vadis as well.  Together we gave it our all to make Quo Vadis into the successful clan that it is right now.

You guys are pretty active in all of our competitions. How do you find time to train in between all the action?

We train with the Finnish clan Spale as our “sparring partners” in ESL 7 on 7 matches once every week. Also we play some company games, invest in clan wars, the weekly 3 on 3 cups in the ESL, as well as Go4WoT of course.

How does it feel to win the Super 6 Cup?

This was our first big success in one of the major tournaments. We’ve reached second place in an Easy 8 Cup before, but nothing compares to winning it all, as we did this time. We’re thrilled!

Did you expect to win this cup or do you feel you got lucky?

We knew we were good. Fortunately we were in a good starting position, having already played about half of the competing teams prior in the ESL. That way we knew what to expect.  After the second play day and the easy win against Aces of Spades and Spale, we were convinced that we could win this cup.

Who was the toughest opponent you have played?

Kazna Kru were probably the strongest guys that we fought against.

Speaking of which: You went to six rounds with Kazna Kru before succeeding in one of the most exciting battles of the tournament. What tactic did you prepare  for this last game, and how did you feel the match developed?

Many teams tend to camp a lot when the going gets tough. But since we are tough ourselves, we thought it’d be best to rather get going and win the Finals not by camping but by giving our Live Stream viewers a little action. In the first match we pushed too hard and got flanked by Kazna Krus’ light tanks, which was a tactical mistake. But Kazna Kru still had to win 2 more rounds, in which we were determined to strike back!

The next two matches we managed to secure key points on the map very fast through aggressive play style to gain and hold control for the win. In the 4th Kazna Kru went for a very aggressive setup so we tried to defend, but the reworked Abbey map made our defense tactic completely obsolete and so we lost. Maybe we are not made for defense! (laughs) In the 5th round our lights successfully scouted the cap rush of Kazna, so we decided to do the same on the opposite side, hoping our Grille would de-cap some of them. But the Kazna Kru anticipated our advances and hunted our grille down quickly. It was a thrilling match right until the last cap point but in the end a deserved draw.

Before the last game our leader FKKSchnitzel asked if we wanted to try out a risky maneuver or stick to a standard tactic. Needless to say, we opted for the risky one. We hoped that Kazna Kru would send all their light tanks deep into the abbey, so that we could flank them with our mediums and arty support. That way they’d have no chance to escape. At the same time our heavies were set to attack theirs, so that they could not support their light tanks. Luckily everything went exactly as planned and so we won the game.

All in all it was an up and down match against a very tough opponent that had a happy ending for us.

We saw 3 German teams playing in the semifinals. Why do you think that is? What’s their secret?

I really don’t know.  Maybe their food is good? (laughs)

We know you participate in many different WG tournaments and in the ESL as well. What will you be focusing on next as a team?

We are still a very young team. Our goal is to get to a point where we can deliver steady performances on a regular basis. Right now, we’re not quite there yet.

As a captain of a successful team what would be your advice to new teams, and also their captains?

All u need is time. Don’t expect too much right from the start. And yes, good players are of course crucial.

Is there anything else you would like to say to the players or people following WG's tournaments?

Watch out for Quo Vadis! (laughs)

Thanks a lot for your time! We’re looking forward to seeing your team and more great battles  in future tournaments!

Check out the replays of Quo Vadis’ impressive victories!

We hope you enjoyed this interview. Keep checking back to always stay on top of all our eSports coverage!