After the Super 6 Cup and the Mangled Metal Cup, what could we possibly add next?  The Easy 8 of course! 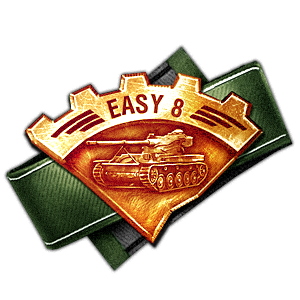 The Easy 8 Cup is a little different to the others – it uses the current professional league rules.  This means that the matches will be 7 vs 7 with a maximum tier of VIII.  If your team is thinking about moving into the professional leagues such as the ESL or the Baltic League, this is a great tournament to get some practice in!

The first, second and third placed teams will receive a gold prize and the Easy 8 quarter of the coveted “EU All Star” medal.

If you want to enter the Easy 8 Cup, you have until the 18th July 2012 to register your team and be accepted.  Remember to click “Apply for Tournament” once your team is completed as we cannot approve any team that doesn’t do this!

Matches are scheduled to take place on Saturday 21st July and Saturday 28th July with the final on Saturday 4th August.  Matches will always take place between 18:00 and 22:00 CEST (16:00 to 20:00 GMT).  Teams will be automatically invited to games from 18:00 onwards.  You can read more about this process here.

Feeling lonely, or unsure where to find enough people for your team?  We have created a special forum thread for teams to look for players and for players looking for a team!

Here are the prizes:

And here are the rules:

Good luck in the Easy 8 Cup and with gaining your EU All Star medals!