The Grand Finals Have Started!

We are proud to announce the opening of the Wargaming.net League Grand Finals! There are tons of attractions waiting for you on the stream and offline in the venue . We’ve been running several separate contests and promotional campaigns, both global and server-specific, and can assure you that they were just the tip of the iceberg – the real fun is coming up!

The best teams from the entire world will be fighting to bring the biggest honour to their region – proving conclusively where the best World of Tanks players hail from! This will be sealed in steel as the winning team name will be engraved in a prize most tank commanders can only dream of….the Monolith!

Here is what you can look forward to during the three-day-long competition:

The first day of the event will be opened with a speech given by the Wargaming.net CEO, Victor Kislyi. Right after that, our caster crews will take over to bring you straight to the action!

The two wildcard teams, together with six teams who finished second in their ranking boards for their respective regions, will be fighting in two groups. Only one team from each group will progress to the second day!

*The teams in this table were put into their groups based on a random draw which took place last week. In the video you will see the JL E-SPORTS CLUB being raffled to the 2nd group, but as the team actually scored 1st place in the Chinese server scoreboard, we replaced the team with the team Energy Pacemaker.

We encourage you to follow the event stream live - you can find it at top of the news as well as on the dedicated twitch page. If you are unable to do this, we’ll be publishing short summaries of each day after the tournament finishes. You can also follow the results page which will be updated on a regular basis.

The second day of the competition will feature the two victorious teams from the group stage and the remaining six teams, who were on top of their regional score boards. These teams will be fighting to progress to the 3rd and final day of the finals.

The teams have been initially assigned their opponents but with two placeholders left over for the winners of the group stage.

We cannot offer you much insight into exactly what will be happening during the third day of the finals but you can be sure it will be truly epic! The day will start with the last matches determining who will be fighting for the World Champion title, as well as all the benefits mentioned before.

Contests and giveaways: You’ll be able to participate in various giveaways throughout all three days of the finals. Please take a look at materials published on your regional portal as well as the live stream and social media channels (twitter and facebook and other regional social media).

Rules: At Wargaming we know that a significant part of our audience are hardcore gamers who want to see every detail of the battle but even that is sometimes not enough for you to fully enjoy the fun. You’re not there just for the fireworks and because of this we’re attaching the full Grand Finals Rulebook for your consideration. The Rulebook is available in English only. 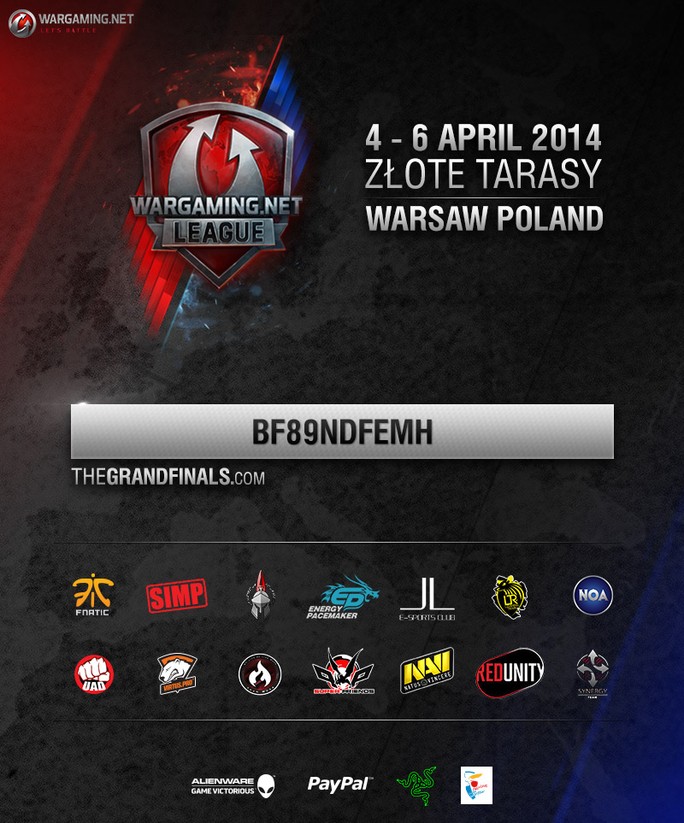